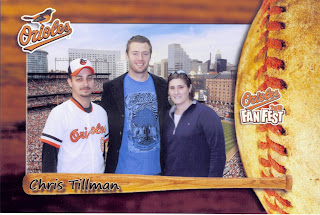 This picture has a lot of good things in it.

1. This picture features me on the left and my girlfriend Ashley on the right. Today is 10 months that we have been together. I'm glad we went to the O's Fanfest this year along with all of the other great things we have done together. I want to thank her for her patience that day and her continuing patience with my hobby.

2. Obviously the third person in the picture is of Chris Tillman, an Orioles top prospect. Last night he pitched a no-hitter for Triple-A affiliate of the Orioles, The Norfolk Tides. He only needed 105 pitches to dispatch the hapless Gwinnett Braves enroute to a 6 - 0 win. He had started the year pitching pretty bad but has seemed to turn it around the last few starts. I'm sure we'll see him in Baltimore sometime this season. I'm sure he couldn't do any worse than Guthrie did last night.

3. The reason this picture was taken was for earthquake relief in Haiti. For a 5 dollar donation, you could have your picture taken with an Oriole of the hour. Tillman had a short line compared to the line for a certain Orioles HOFer that I also HAD to get my picture taken with. (More on that in the Future) The money was for a good cause so I said what the heck and paid the 5 bucks. I wonder if Chris donated his time or if he had to be told that he needed to go and do this. I'd like to think that he did it out of the goodness of his heart and wanted to be there. Judging by his smile and his overall demeanor, I would say he wanted to be there.

4. Tillman also looks a lot like my cousin, Chris. They are both about the same height with a similar build. Every time I saw Tillman pitch last year, I had to look twice. I'm not sure they share the same taste in clothes however. I remember Ashley saying that he could probably use a little help with his wardrobe. Maybe he just needs a girlfriend to keep him straight like I do. I don't think Amber Theoharis is seeing anybody. Go for it Mr. Tillman!
Posted by Ryan H at 7:48 AM