As I said in my last post I went to the Orioles FanFest this past weekend. I showed off some bobbleheads and a magazine that I got there. Now, let me show you some of cards and postcards I got signed. 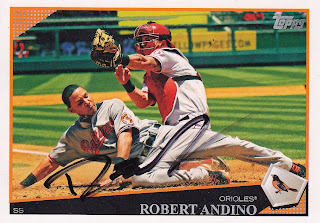 This Robert Andino card is the first actual card I got signed all day. I like this play at the plate card for an autograph. It's probably Robert's best card since he doesn't have that many. I even made the remark to him that I bet he's tired of seeing this card. He just smiled and let out an affirming groan. I think he was in a better mood at this year's FanFest because he got to sign beside Brian Roberts and not Squinty McBigTooth (Garrett Atkins)! 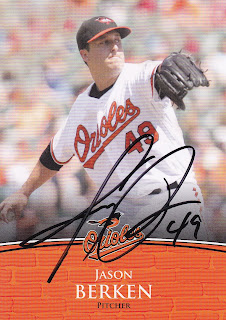 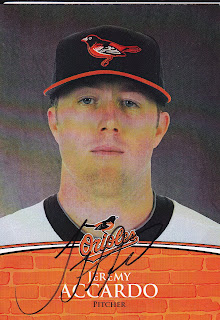 I got this Jason Berken and Jeremy Accardo for helping out Kirk of Eutaw Street Cardboard with his extra Jim Palmer autograph ticket. Berken had a huge pile of them pre-signed and you could grab as many as you want. He's a player that "gets it" apparently. Accardo was also pleasant even though I didn't have anything to say but thank you. 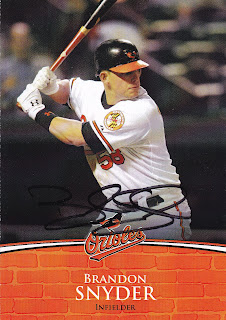 A little later in the day, I was walking back up to the memorabilia sale and found this Brandon Snyder Autograph laying on the steps! I looked around to see if anybody was coming back for it but I guess it wasn't that important to them. Finders Keepers! 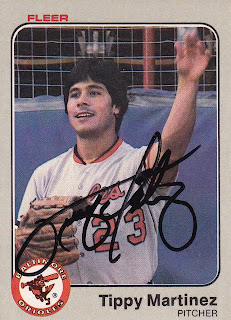 This is the final card that I had signed on Saturday. A 1983 Fleer card of Orioles Hall of Famer Tippy Martinez. I like this card because it looks like Tippy is playing catch with a teammate sharing a laugh. If you can stretch your imagination a little bit you could say that he's waving.