Does anyone remember in the movie Twister (one of my all-time favorites by the way) where Bill went back out to the country to get his divorce papers signed by Jo and all of the other storm chasers were saying "Welcome back Bill!" "Great to see ya Bill!""Nice to have you back Bill!"?

Do you remember when he would adamantly reply "I'm not back!"?

That's kind of what this post is.  I'm not "Back" just yet. I need to clear some cards off my desk so I've got to write about some of the awesomeness I've acquired over the summer. I've been a busy little bee over the last few months with moving, going on vacation, playing on my adult league team, taping and painting the new house, and keeping the grass cut at both the old house and new house.  Trust me, anything that could have gone wrong at the old house.  Air conditioning, electricity, water service, fallen trees/limbs and just the difficulty of getting it rented are just a few of the issues I've been dealing with.  The new house is another story altogether.  I could write a whole post on those issues but I'm not going to do it right now, maybe later.

I'm writing this post from work since we still haven't been able to get internet hooked up in the new house.  Mostly because we are trying to keep our bills under control until the old house is rented.  Secondly, we just haven't had a whole lot of time to watch TV or surf the internet.

I have had some time at work to read other blogs and even swing a few trades.  It's kind of tough printing out emails and wantlists and taking them back and forth working out deals but I'm hardcore like that. 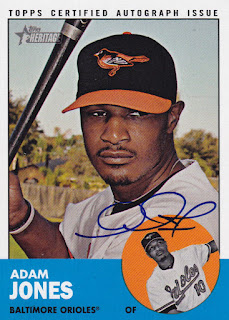 So, this first card comes from Colbey at Cardboard Collections.  A sweet on card autograph of the O's best player Adam Jones.  I'm glad to see that he's going to be sticking around for quite a while with his new contract.

Next up is a trio of Nick Markakis cards that I won off of eBay.  Either the auctions ended during work hours or I put in a bid and prayer and hoped that I would win while during my off time.  Talk about really looking forward to going to work the next day!  I didn't break the bank on any of these.  I paid less than 8 bucks shipped for each of these.  The Red Ice is #'d 6/25, the Gold Refractor 23/50, and the Mosaic Refractor 5/10. 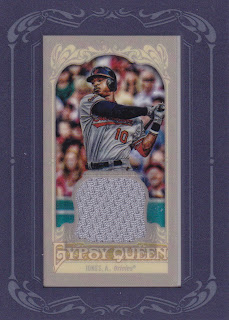 Here's a Gypsy Queen Relic that AJ from the Lost Collector sent me as a thank you for the Becketts I sent him.  Thanks AJ. 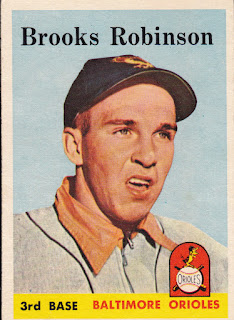 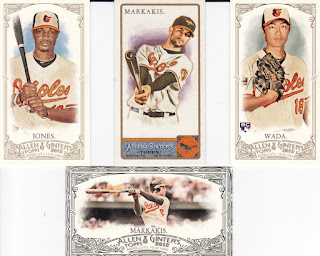 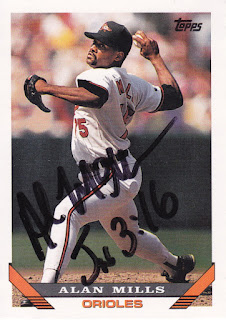 On one of my grass cutting expeditions to the old house, I checked the mailbox and one solitary envelope was sitting in the back.  It contained this card that I sent to Orioles Spring Training.  Alan Mills is the pitching coach for the Aberdeen Ironbirds and was a total badass when he was pitching. This brings my Spring Training TTM's up to 3/25 that I sent out. That's right the 3rd out of like 25 I sent out!

Here's 2 mini cards that I got of Nick Markakis recently.  The 2011 is a No Number back that I won on eBay and the 2012 Black Border was sent to me in trade from Sam over at the Daily Dimwit. He also sent over the Wada and Jones minis pictured here. Thanks for the trade Sam! 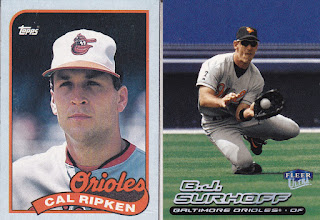 Another trade I made was with Tom at the new-ish Waiting til Next Year blog.  He was cleaning out his trade boxes of cards he didn't need so I jumped in for the Orioles.  These are just a few of the nice lot of cards he sent, I just showed them because they're Cal Ripken and BJ Surhoff.  CAL RIPKEN AND BJ SURHOFF.  Head on over to his blog, he might still have a pile of cards from your favorite team with your name on it.

Last and certainly not least we have my favorite ebay buy of the summer.  A mint condition 1958 Topps Brooks Robinson.  We'll its mint to me, dammit, because my blog, my rules!  What a great card!
I'm not the biggest fan of 1958 Topps but it BROOKS FREAKING ROBINSON and he's about to sneeze.