The big move is getting closer but I still had enough time to sneak out to a Flying Squirrels game this past week. I usually only go when there are free tickets involved or the Bowie Baysox are in town.  I had this date marked on the calender since the schedule came out because I really wanted the travel coffee mugs that they were giving away that night........ NOT!  Well the coffee mugs are nice I really went because I wanted this: 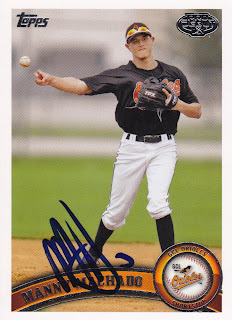 And I GOT IT!  Say what you will about Pro Debut, but this autograph turned out awesome!  And not to mention it's Manny freakin' Machado!  He comes as advertised.  He made some great defensive plays in the field and had a decent night at the plate going 1-3 with a walk.  I can't wait to see him play on MASN on a regular basis. 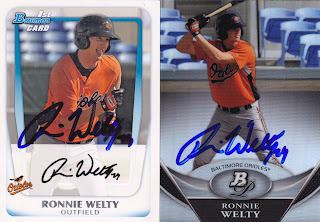 I also got Ronnie Welty on 2 cards which turned out great.  Ronnie's played pretty good so far this year so Triple-A might not be too far down the road for him. 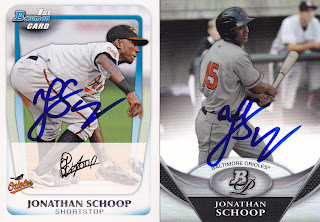 I also got Jonathan Schoop on both of these cards from last year.  He's struggled a bit so far in Double-A but I'm sure he'll figure it out and start mashing again soon. 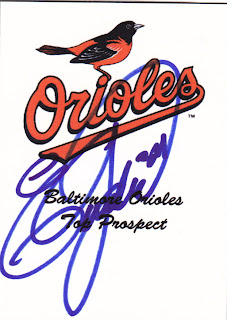 And the mystery autograph for the night.  Anybody that guesses who this is gets the satisfaction of knowing who it is.  He's been mentioned on the blog before (that really narrows it down).  He's a player that did a really nice thing for me at a Squirrels game last year.

The Baysox won the game 2-0 with a great pitching performance from Zach Clark and some timely hitting by the offense.  I had a good time talking to some of the other fans at the game and just being able to spend sometime not thinking about packing and moving.
Posted by Ryan H at 5:05 PM