I think I am finally officially back in blogging mode now since several things have have been resolved with the old and new house and we officially have internet at the new house!  This will make the process of scanning and writing much more convenient and easy.   Not a moment too soon either as my day at the 2012 National (Saturday) wrap-up will only take this one post.  I got a ton of cool Orioles cards that I won't bore everybody with since they are really only of interest to me and my team set binders.  I didn't make a ton of purchases but the ones I did make were pretty awesome. 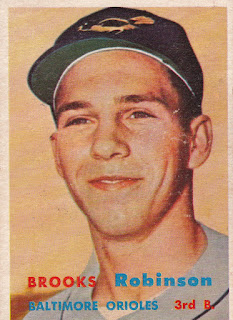 I'm just going to get this out of the way.  I bought a 1957 Topps #328 Brooks Robinson rookie card!  This was the #1 priority wantlist item that I wanted and it was a long search for it.  I probably asked about 75 different dealers if they had one and I got the answer of "no"from 70 of them.  I think I wasted a lot of time looking for the right one but I'm very happy with the results.  There were several near mint copies that I saw that just weren't the right card for me.  When I was going to drop about half of my budget on 1 card, I was going to make sure it was the right one.  I got a great deal on it and spent about 15 minutes talking to the dealer that sold it to me.  It has a little bit of paper loss (near his ear), the corners are a little bit fuzzy and the centering is a bit off (the scan cut the bottom border off a bit) and there's a wax stain on the back.  This is what a vintage card is supposed to be (IMHO, of course!).  It's such a great card that I'll treasure always, especially since my wife gave me some money towards it as an early 1st wedding anniversary gift (she got a new puppy out of the deal, so everyone is happy)! 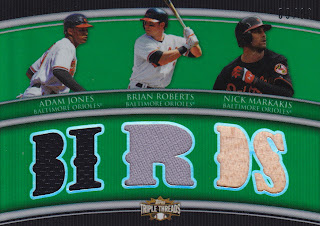 Moving right along to my next purchase is this triple GU card of the Orioles brightest stars in 2010.  It's number 9/18!  Adam is haveing a great season, Roberts can stay on the field long enough to contribute and Nick just came off the DL and is hitting like a crazed animal.  No matter the on field performance, this is a sweet card!  I've seen a few of these on ebay but was always outbid.  I got this card for an Andrew Jackson. The only way this card could have been better would be an Orange background instead of a green one.  This card will definitely be sitting on my desk so I can stare at it. 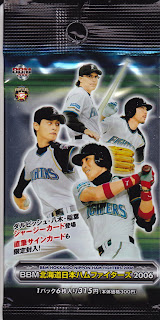 While on my search for the Brooks RC, I walked by a table that had tons and tons of Japanese baseball cards and memorabilia.  Since I have an interest in Japanese baseball because of my own heritage, I had to stop and check it all out.  There was a lot of cool things there including a bargain bin of unopened packs 5 for 10 bucks.  I rifled through the bin and found 3 of these showing Yu Darvish and Tsuyoshi Shinjo.  These are from the team set so there was an increased chance of pulling a Darvish card.  I didn't get one but it was neat to rip these packs.  I also got the one pack that was from the 2006 Tokyo Yakult Swallows team set since I actually saw them play in person that year.  I also grabbed a pack of 2009 Baseball Magazine First Edition because Darvish is on the front.

I bought myself a box of 2012 Topps Series 2 since during all the moving and painting, I almost totally ignored the set.  I'll be busting that box in the near future and posting up the results.

I also had a dumbass attack and bought 2 boxes of 100 ct. 1 pocket pages (for holding 8x10s in binders).  I didn't realize my mistake until I got home Saturday night.  If anybody needs them I'm willing to trade them to you since they do me no good.  I really needed some 9 pocket pages so I'll just have to wait til next time.

I perused a lot of bargain bins at the show and filled a bunch of holes in some of my O's team sets.  I even met up with Julie from It's Funner Here at one of the dime box tables.  We kept running into each other throughout the day exchanging pleasantries and showing our latest purchases to each other.

I also met up with fellow Orioles Blogger Ryan S. from The Great Orioles Autograph Project in a chance meeting while walking through the cardboard jungle.  We talked for couple minutes about the team and about our respective collecting goals.

And I can't forget my good buddy William from foul bunt.  He stayed at my house Friday night and we stayed up way too late looking through cards.  I appreciate him putting up with my scheduling conflicts and my random sense of humor.  It's always fun going to a card show with someone you know and being able to "geek out" with a person with similar interests.

Overall, I had a good time at the show.  I'm already looking forward to the next card show!