Since the Baysox were in town playing the Flying Squirrels on Monday night, I decided to head over to The Diamond and see the game.  Oh yeah, and Dylan Bundy was also making his second AA start.  If you haven't heard, he's kind of a big deal in baseball news right now since he's one year removed from getting his high school diploma and having the success he has had this year in the minors.

So I loaded up my autograph with Orioles prospects and headed out.  When I first arrived, I got my ticket and went thru the gate.  As you can see from the scan of the ticket above, the Squirrels were giving away Nutzy and Zinger Salt and Pepper shakers.  Nutzy is the Squirrel Mascot and Zinger is the Acorn sidekick.  Here's a pic of the set: 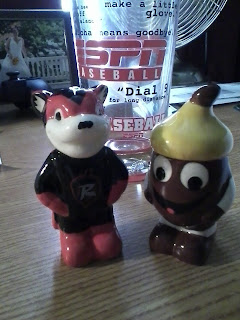 They are fairly well done in ceramic.  I thought they were going to be some cheap plastic crap from China.  But since the Squirrels have been in town for the last 3 years, they have really paid a lot of attention to the fan experience which I like.  The Richmond Braves didn't seem to go too far out of the way to please the fans when they were here.

So onto the autographs: 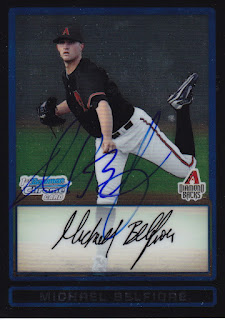 Mike Belifiore was one of the first signers.  The Orioles got him for Josh Bell earlier this year.  I used the fine tipped (wrong) Staedler pen instead of the medium tipped (correct)  version.  GRRR.... 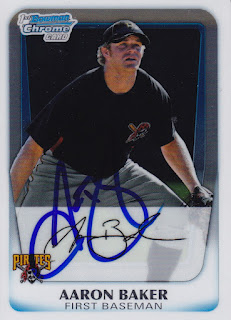 Aaron Baker is on the DL right now and not expected to play for the rest of the season.  You can see I used the correct pen this time. 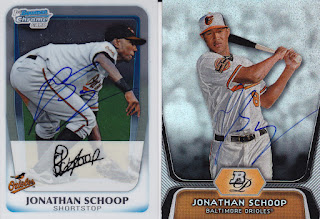 I got Jonathan Schoop to sign multiples. (with the wrong pen again, dammit!) 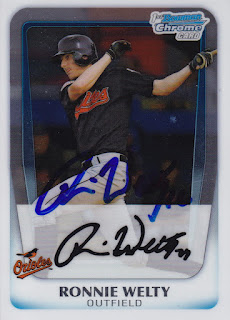 Ronnie Welty signed and was very pleasant.  He even remarked at how nice of a night it was for a ball game even though he was on the bench. 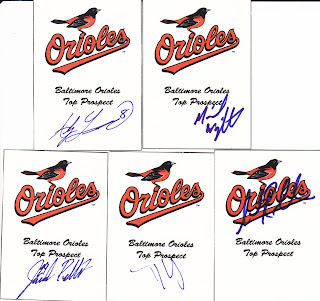 Here's the customs that I got signed.  From the upper left going clockwise: Andy Loomis, Mike Wright, Jacob Pettit, Ty Kelly, and Antoan Richardson.  Loomis, Wright and Pettit haver really nice signatures.  Ty Kelly needs some penmanship work.  Antoan Richardson is kind of a dick saying that he wouldn't sign in the white spot because he doesn't want it counterfeited or something. Dude, you're 28 and in double-A, get a clue, you're not a top prospect! 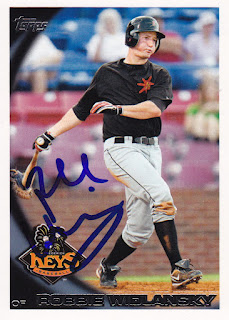 Robbie Widlansky was a hero for the Baysox this night.  Lets set the scenario.  Dylan Bundy and Clay Schrader had held the Flyin Squirrels to only 2 runs on the night while Bowie was flailing away and hitting tons of at'em balls scoring none.  In the top of the 8th inning the skies opened up and caused an hour and 15 minute rain delay (yes I stayed cuz I'm hardcore like that, and I'm glad I did for 2 different reasons.)  Reason #1 is Robbie jacked a 3 run bomb in the top of th 9th inning letting Bundy off the hook for the loss and the possibility of going another game up on the Richmond for the wild card spot.  It wasn't meant to be because Kyler Newby (Bowie's closer) ruined that and Richmond scored 2 in the bottom of the 9th to win it.

So after sticking around for about 4 hours, I decided to try and get what I came for.  Yeah, I came to watch Dylan Bundy pitch and Bowie play but I also had other motives for the trip.  I was unsuccessful before the game in getting Dylan's autograph so I decided to stalk stake out the players entrance and see if he would sign while leaving.  I wasn't the only one there.  I had the company of about 12-15 other autograph seekers looking to get some late night 'graphing action.  We all patiently waited for about 20 to 30 minutes letting the other players walk by (who I'd already gotten earlier in the evening).  Most of the other seekers didn't even know who they were other than me because I have a photographic memory.

Then he comes out, talking in the phone.  This is usually when most guys "big league" you and walk right on by without even acknowledging you have a pulse.  He circled around inside the little fenced in area for a few minutes and then walked over to us while still chatting on the phone.  I was the 3rd person in line and here it is: 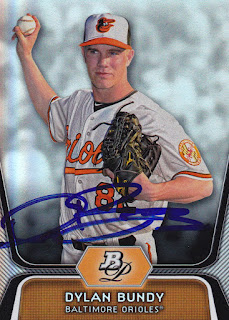 SAWEET!  His signature looks great on the new Bowman Platinum!  I was really thrilled to meet him but I really wish I could have chatted with him for a few minutes but he was on the phone and I didn't want to be rude.  I did say thanks, though!  He seemed like a good kid.  ( I can call him kid because he's almost 10 years younger than me).
I think he pitched pretty well during the game and he even hit 96 mph on the stadium gun IN THE 6TH INNING which I think is about 1 or 2mph slower that what it actually is.  While I think that he is better than some of the pitchers currently on the Orioles 25 man roster, I don't think he should be called up for the stretch run.  I think a month or 2 in Triple-A next spring will do him good and then he can be promoted.  A lot of people are calling for him to be activated now but I don't think that he's quite ready.  I say just let him go home rest, and then start working out, and gettting ready for next season while letting the experiences of the 2012 season sink in a little bit.  But that's just me, the guy who has to pay to get into the ballpark.

So it was a great night (other than the rain delay) and I plan on going to one more Squirrels game this year next Tuesday.
Posted by Ryan H at 7:29 PM