As late as 6 months ago, I would have never thought that this post would make it on this blog.  Like I said before, this is a gift hobby box to myself as I recently finished moving to a new house and painting just about every visible surface inside of it.  I'm new to the A&G universe since I have just come down with the fever in the past couple of months.
I think the base card design is pretty good this year. It's different from past years but not too different.  It sticks to what Ginter does best: looks classy.  I think that Topps put too many bells and whistles on last year's issue and that hurt most everybody's impressions of the set.
So enough about what I think about the cards lets see what I got: 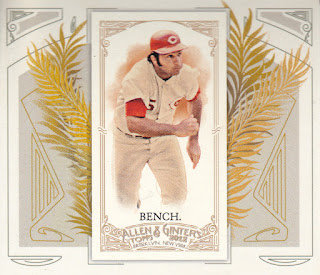 Here's the box topper.  It's a plain jane Johnny Bench N43 card.  How the heck am I supposed to store this thing? 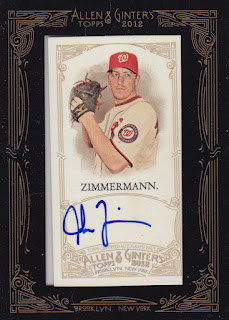 My first hit of the box was this Jordan Zimmerman autograph card.  Since he's been pretty good this year I'm pretty happy with pulling his 'graph! 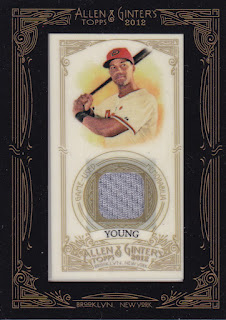 I don't have a ton of things to say about my first relic card of the box other than it's for trade.

Here's the rarer minis that I pulled.  I've always admired George Washington as a Military Hero.  He got his butt whipped in many, many battles during the War for Independence, but he men kept fighting for him.  I think that's why he's in this set, not for winning battles but being well enough liked that his men respected and fought to the end for him. 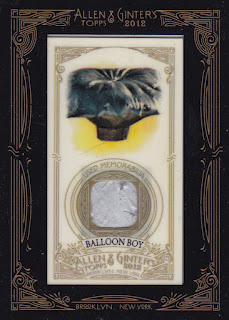 Here's my big mojo hit of the break.  It's a pretty neat one too.  I remember when this happened a few years.  This relic is actually from a specific event unlike the normal disclaimer that is on the back of relic cards these days.

So I'm building the set.  You can check out my wantlist for what I need along with some of the other sets in working on right now.  Also,I bought a few lots on ebay so those are mixed in with the trade list below: