2004
For the Orioles, the draft of 2004 will always be know as the Wade Townsend draft.  It's a pretty good example of the Orioles being cheap and it really bit them in the butt... or did it? 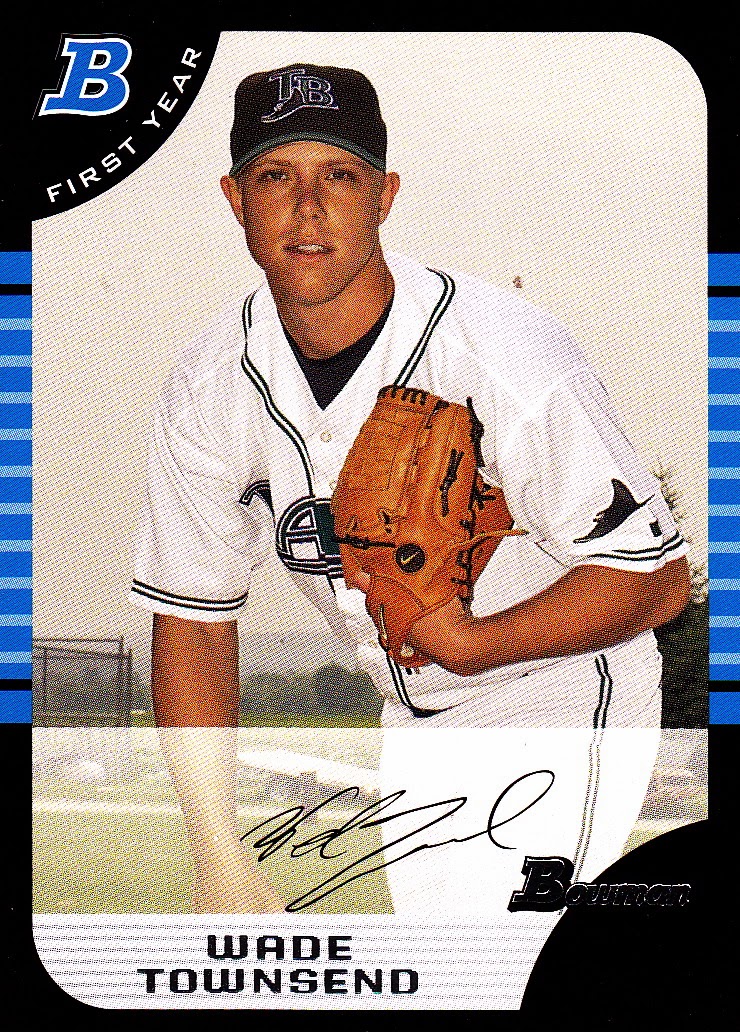 The Orioles picked Townsend as a college junior.  He was one of the top pitchers at the collegiate level during the spring before the draft.  There were red flags for me when it came to Townsend.  One of them being that Rice University had a tendency to pitch the living dog sh*t out of its "horses".  He was a college junior he had leverage of returning to school for his senior season instead of signing a contract to become a pro.  That's exactly what he did.   He spurned the Orioles "slot value" contract and went back to Rice for his senior season.  There is a little more to the story however.
From articles I have read, it seemed like the Orioles really wanted to draft Stephen Drew (picked by the D-backs as the 15th pick).  There were rumors at the time that Drew wanted huge money.  Stephen Drew's agent was none other than Scott Boras so you can draw your own conclusions from that.  I remember really wanting Homer Bailey to drop to the Orioles but the Reds took him with the previous pick.  That would have worked out pretty good for the O's.  Instead here's my new pick for the Orioles: 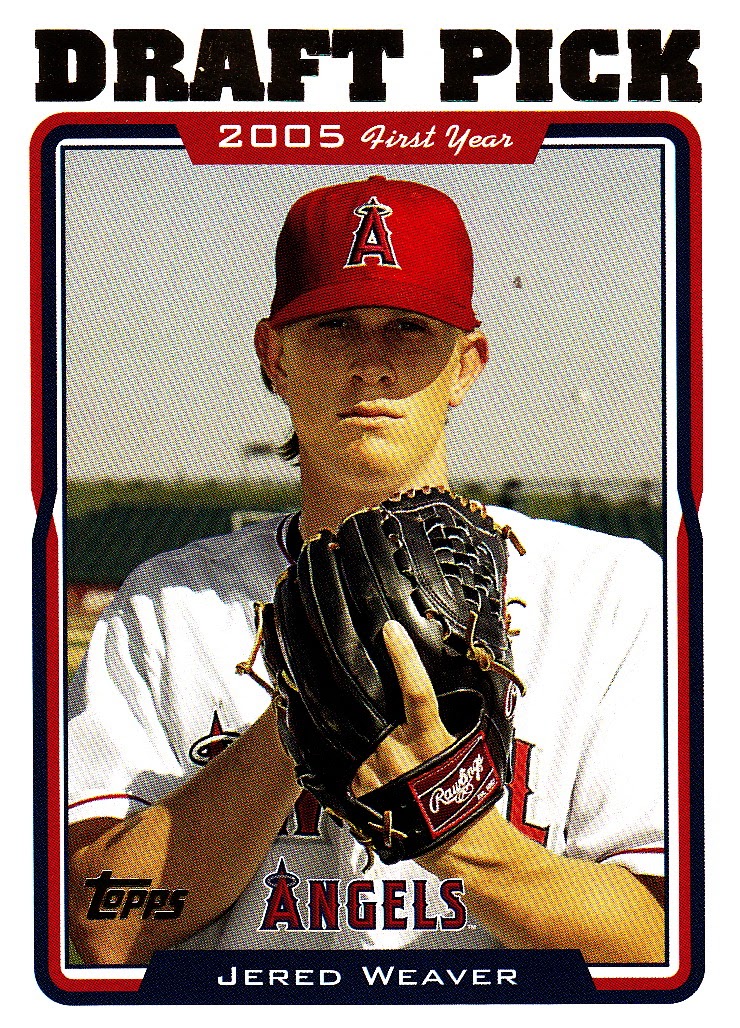 New Pick: Jered Weaver, RHP, Long Beach State (picked by the Angels as the #12 pick)
I would say this would happen in the real world of 2004.  Boras is also Weaver's agent.  Scott Boras is the reason that the Draft went to the new slot value system in 2012.  The Orioles didn't pick Weaver or Stephen Drew for the simple fact that the Orioles owner Peter Angelos wasn't willing to shell out the money to sign them.  Say what you will about Weaver but he's had a good career.  He was the guy I wanted when Homer Bailey went off the board.  There were several other good options drafted right after the Orioles pick at #8 including Neil Walker (#11), Weaver (#12) Billy Butler (#14), and Drew (#15).  Farther down the list, Gio Gonzalez (#38), Yovani Gallardo (#46), Hunter Pence (#64), and Dustin Pedroia (#65) were all available. 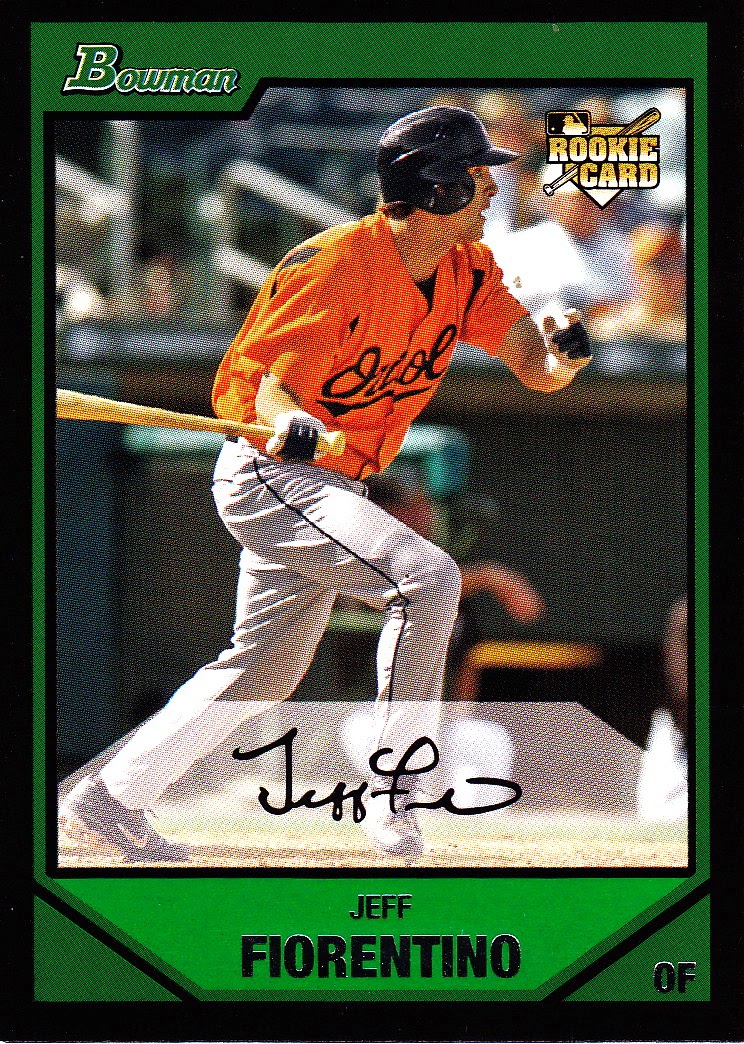 3rd Round, Pick #79: Jeff Fiorentino, OF, Florida Atlantic University.
Jeff was a solid pick at this slot.  He was a polished college hitter and made sense at this point in the draft.  I remember watching him make his major league debut and getting a hit in his first 2 ABs.  What I'll never understand is why they pulled him all the way from High-A ball straight to the majors less than a year after being drafted.  Maybe the front office was trying to cover up the Townsend debacle by promoting its next highest draft pick saying "Hey, look at this guy, he's great, we didn't need Townsend anyways!"  In turn I think they stunted his growth as a player where they could have let him develop a year or 2 in the minors to build up some confidence.  I guess that's why I'm a blog writer and not front office personnel! 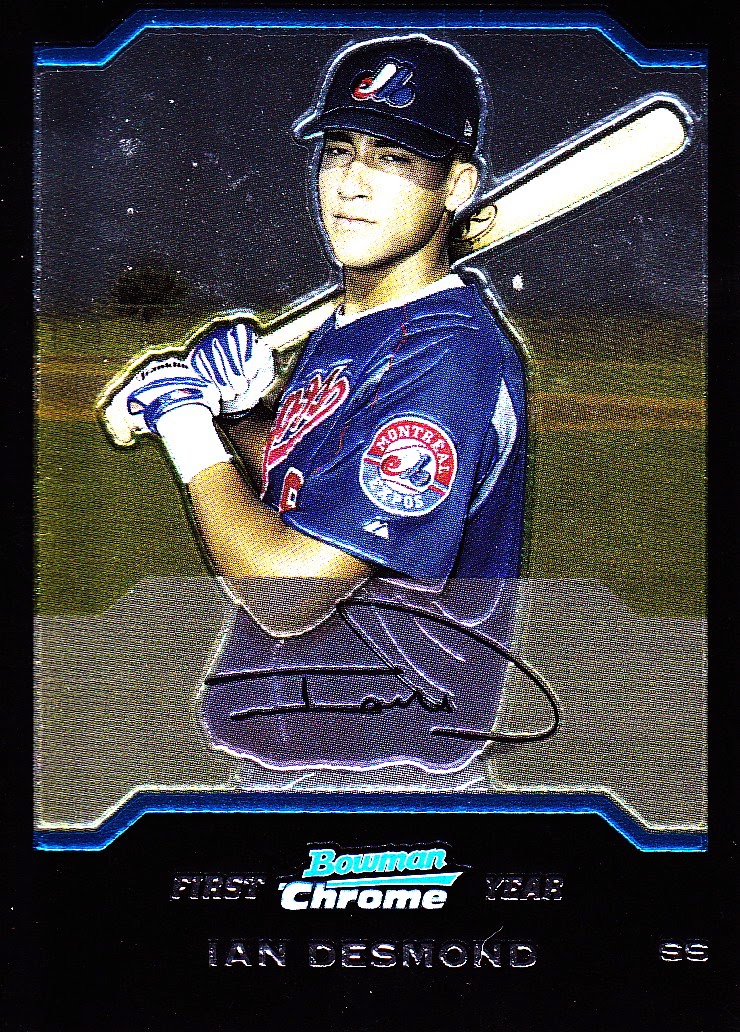 New Pick: Ian Desmond, SS, Sarasota HS, FL (picked by the EXPOS as the #84 pick)
I'm not saying Fiorentino was a terrible pick but it could have been a better pick with Desmond if you look at it from a 2014 perspective.  Desmond has gone onto become an All-Star SS for the Nationals while Fiorentino played independent ball last year after couple shots at the big leagues. 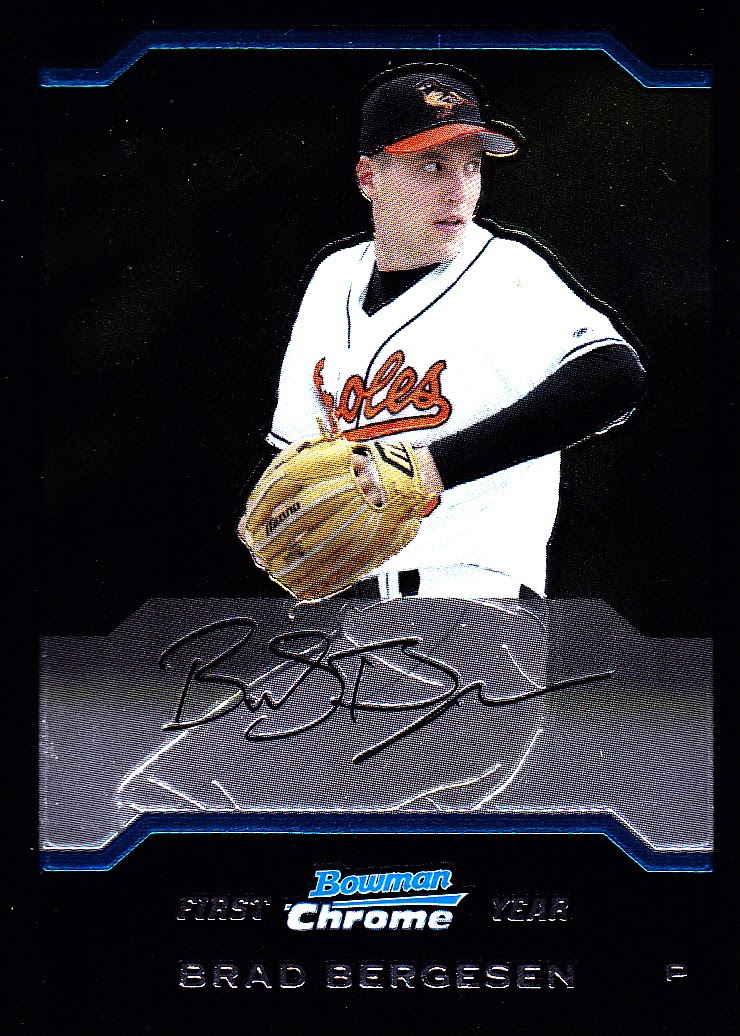 4th Round, Pick #109: Brad Bergesen, RHP, Foothills HS, Santa Ana, CA.
The Orioles luck with high school pitchers hasn't been overly great over the history of the draft.  Bergesen stands out though since he worked his way up the minor league ladder and made his major league debut in a game that I actually attended.  He will always have that soft spot in my mind just because of that fact.  2009 was his best season and he faded from the Orioles plans which led to him pitching in the Far East last year.  Ever since Billy Butler broke Brad's shin with that screaming line drive, he was never the same.  I'm keeping this pick for sentimental reasons even though Chris Iannetta was the next pick in the draft. 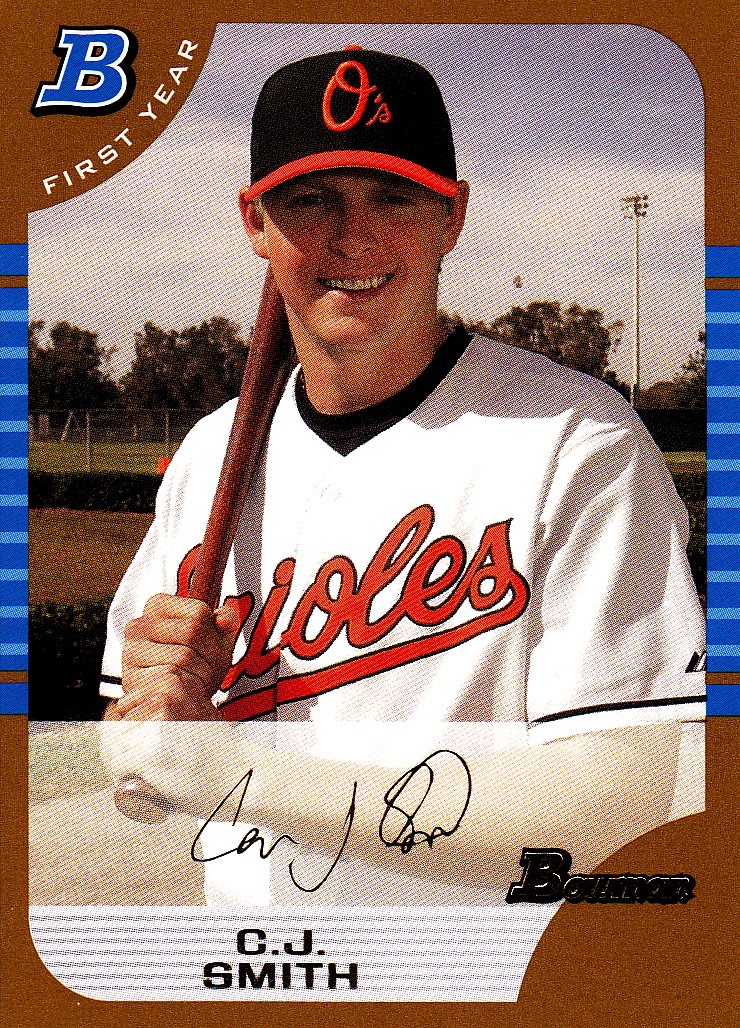 5th Round, Pick #139, C.J. Smith, OF, University of Florida - Gainesville
I admittedly don't know much about CJ Smith.  I have several of his cards and there are some certified autographs in various products around.  This was a period of time when I was in college full time and working full time so I didn't have a ton of time to play with baseball cards or pay close attention to the draft.  He must have been somewhat highly regarded as a prospect since Topps went to the trouble of making cards of him.  Judging from his minor league record, he never got the bat going.  I think I'm going to stick with this pick mostly because there aren't any obvious upgrades in the next 10 picks of the draft, and partly because in a parallel universe maybe his bat was a little bit better. 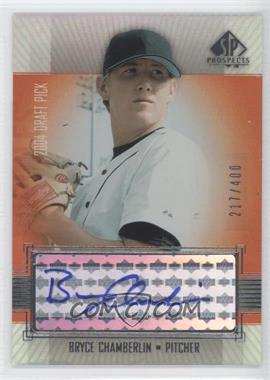 6th Round, Pick #169, Bryce Chamberlin, RHP, Washington State University
Here's an interesting story that I didn't know until I started researching him a little more.  Bryce was assaulted off-campus during the college baseball season before the draft.  He sustained a broken jaw while trying to end a conflict between 2 other people.  The injury ended his best season up to that point.  He was 6-1 with a 5.18 ERA.  The Orioles still saw some potential and drafted him.  Unfortunately, he never got it going in the minors and posted a 6.00 ERA for his career. 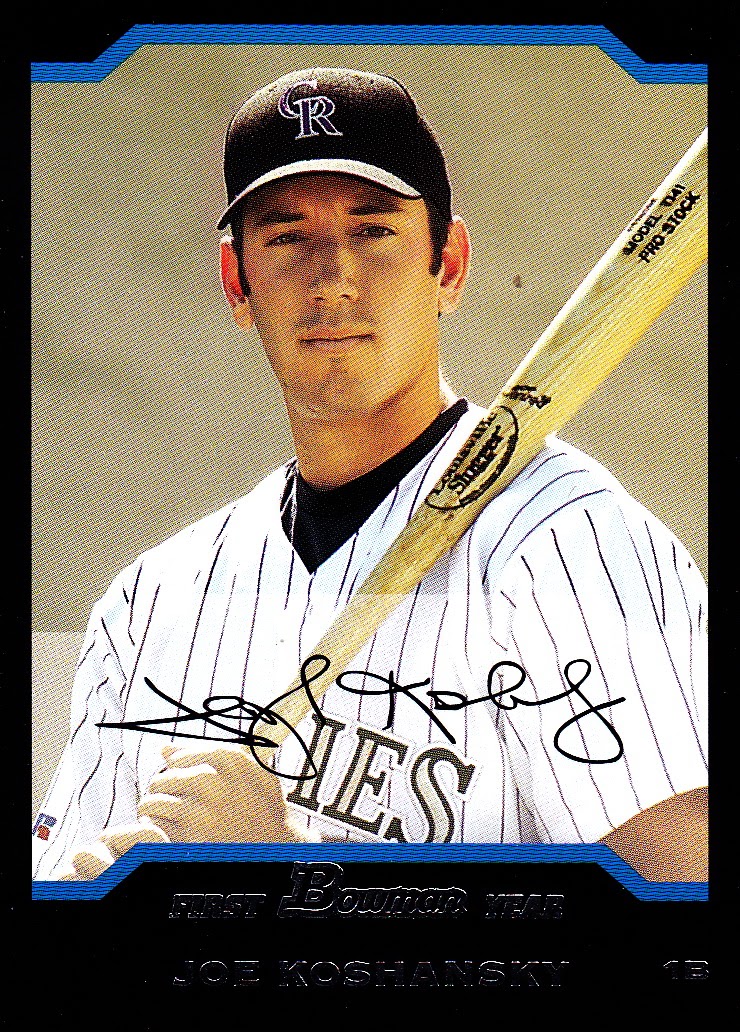 New Pick: Joe Koshansky, 1B, University of Virginia (Drafted by the Rockies with the 170th pick)
Again I am robbing the Rockies pick here with another player I followed pretty closely through the minors.  UVA is my favorite college baseball team and they always seem to field a competitive squad.  He destroyed minor league pitching during his career but never could put it together in the majors when he got a chance.  Getting a good shot to play First Base in Colorado during the 2000s was going to be tough since legendary Todd Helton played there.  Had Joe been given a shot to play somewhere else besides the Mile High city, he might have had better numbers.  Other players taken in the 6th round were Ben Zobrist (#184), and Cla Meredith (#185 from Virginia Commonwealth, VCU for short) 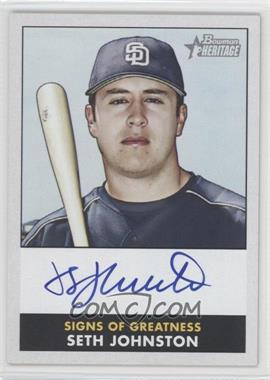 7th Round, Pick #199, Seth Johnston, 2B, University of Texas at Austin
I don't know much about this guy or remember hearing about him in the Orioles farm system.  He didn't sign a contract, returned to school and was drafted again the next year by the Padres.

The 7th round of the 2004 draft wasn't very successful in terms of players making the Big Leagues.  Only 3 players have had just brief cups of coffee.  I guess I'm just going to stick with the pick. 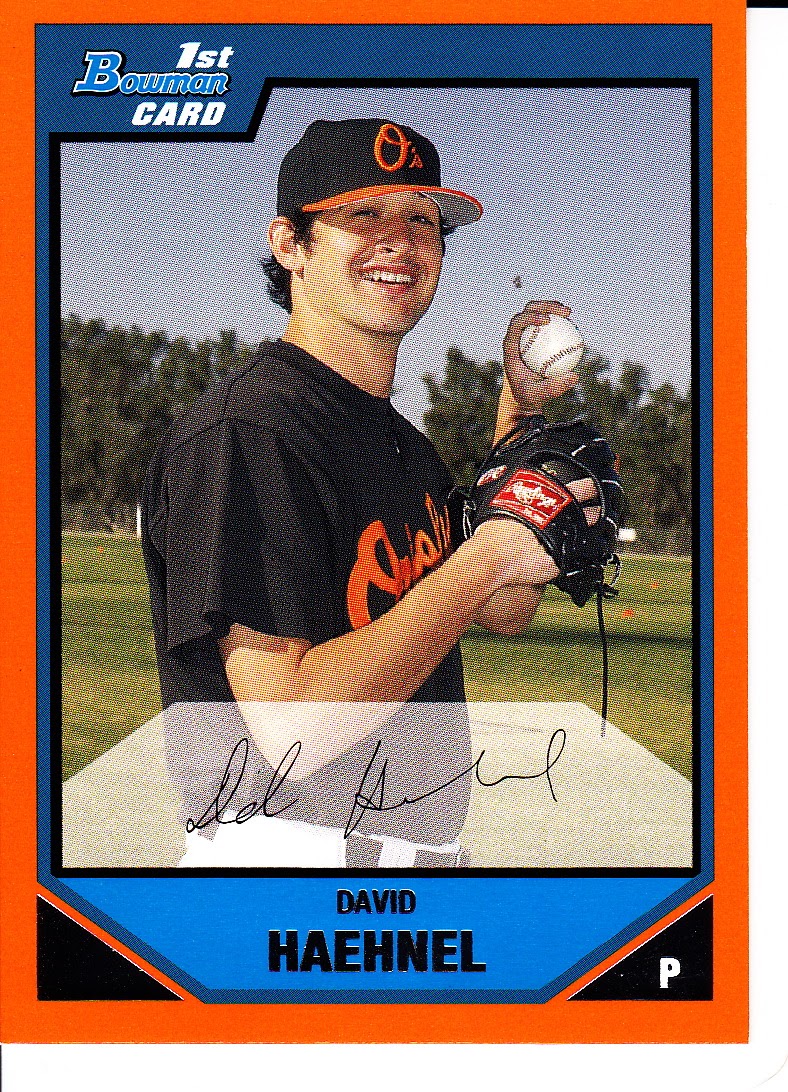 8th Round, Pick #229, David Haehnel, LHP, University of Illinois at Urbana-Champaign
David Haehnel is a prime example of the Orioles ruining a prospect before they could reach their potential.  During his first 2 years in the Orioles system he was an outstading reliever racking up saves and keeping a very respectable ERA.  Then came 2006 when someone had the wonderful idea of turning him into a starter.  That's when the wheels came off.  He was hit hard the next 2 seasons and then released.  Its a shame that they didn't leave well enough alone and just let him be a reliever.

While I'm tempted to change the pick here, I'm sticking with Haehnel on account of what could have been.  I was tempted by future and short time Oriole Jim Miller (drafted with the next pick) but figured Haehnel could have been just as successful if the O's hadn't screwed up his development.


After the 8th round things became dismal for the O's.  None of the players drafted after the 4th Round made an impact for the O's.  In the 15th round they drafted Future San Diego Padre Will Venable as well as future St. Louis Cardinal Jaime Garcia in the 30th Round but neither signed and went back to school.

There were several future O's drafted later than the 8th round that year including: 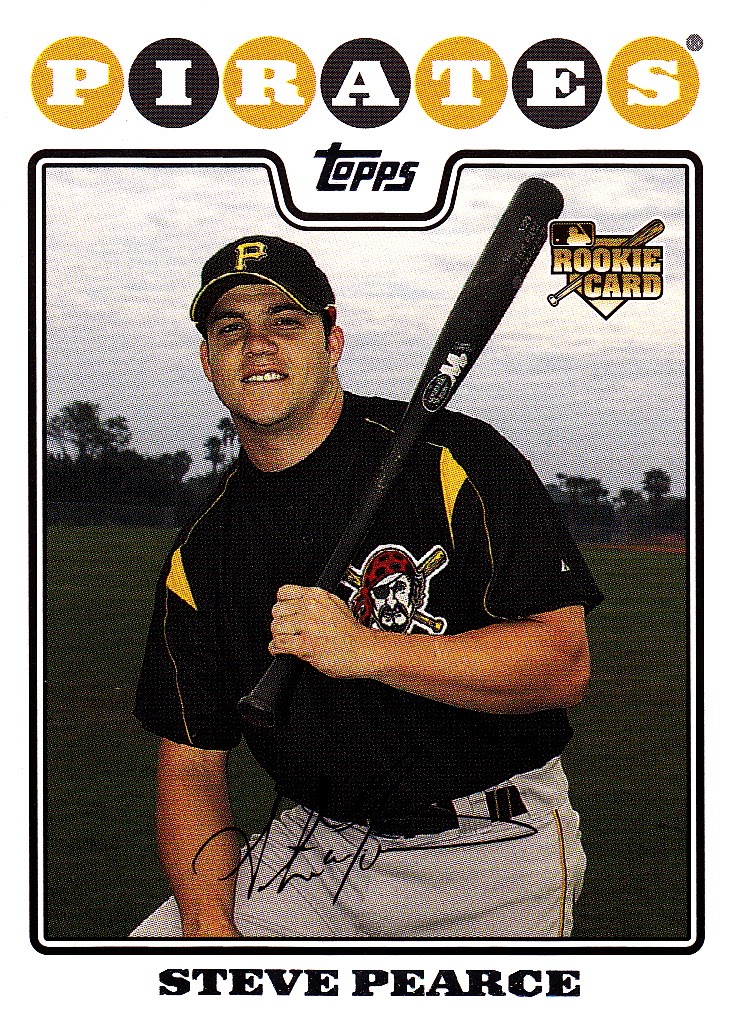 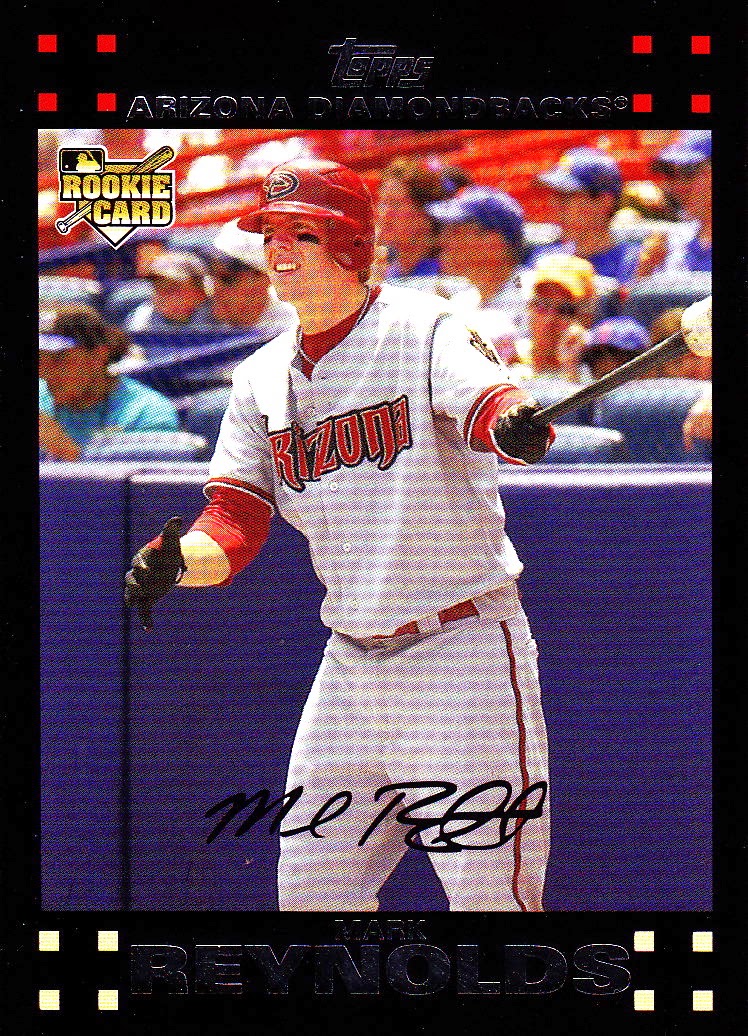 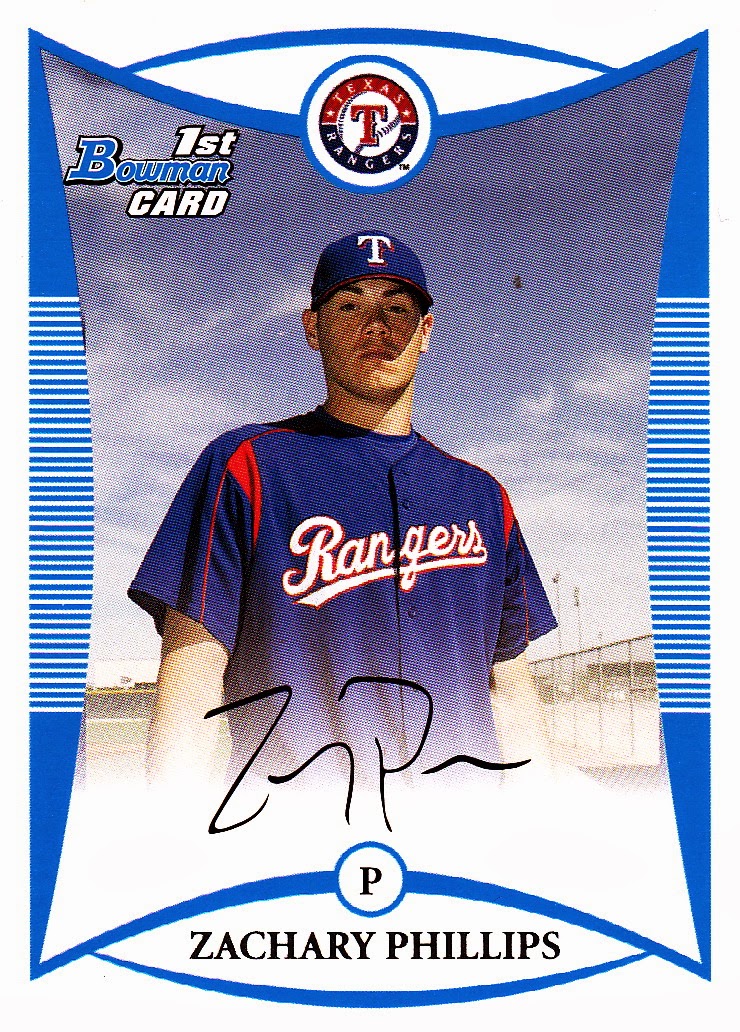 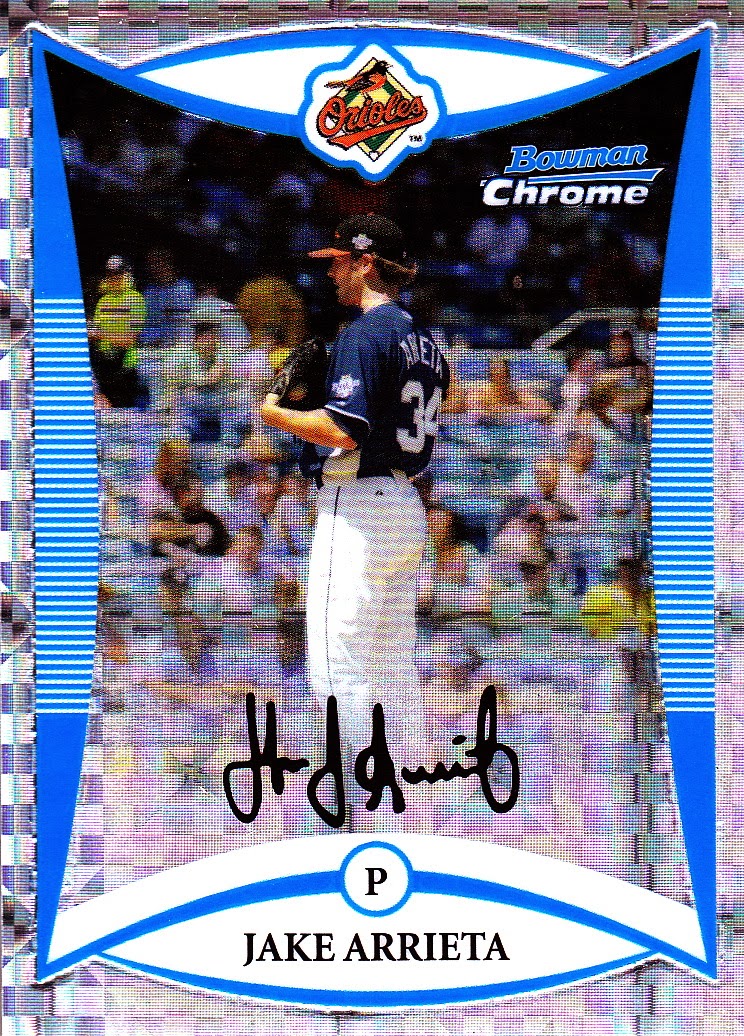 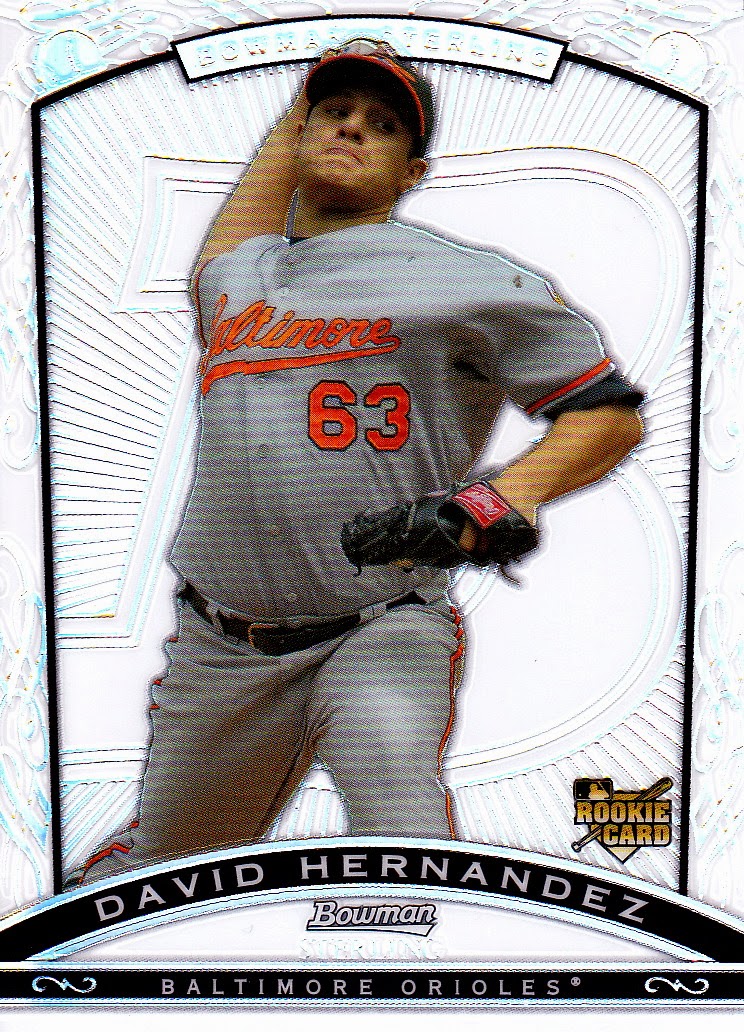 David Hernandez (by Diamondbacks 34th Round, Pick #1016, Did Not Sign) 
So plenty of late rounders were later grabbed by the O's in trades and waiver claims.  I had no idea that Davis was drafted by the Yankees.  Late rounders like himself are usually players that have a strong college commitment and teams just take a flier on them hoping that they will take the money and not go to school.  Chris spurned the Yankees offer, went to school, increased his draft stock, and was drafted by the Rangers a few years later.


Here's a few good players that were drafted that year.  I'm sure there are more than a couple teams that wouldn't mind picking these guys as first rounders seeing how they turned out! 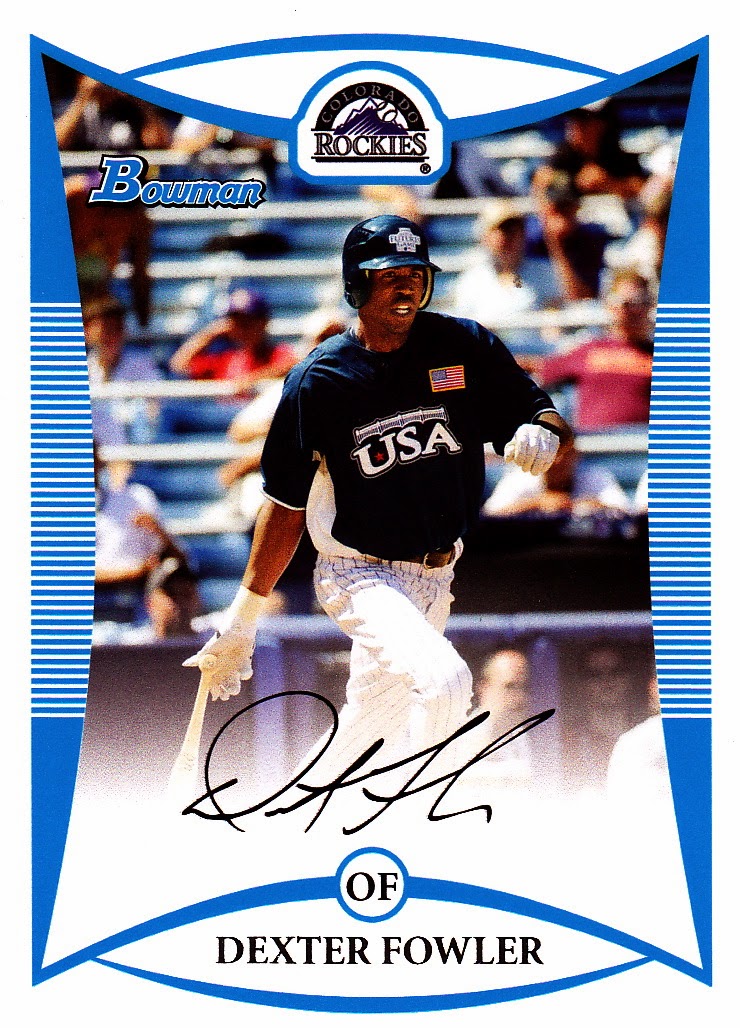 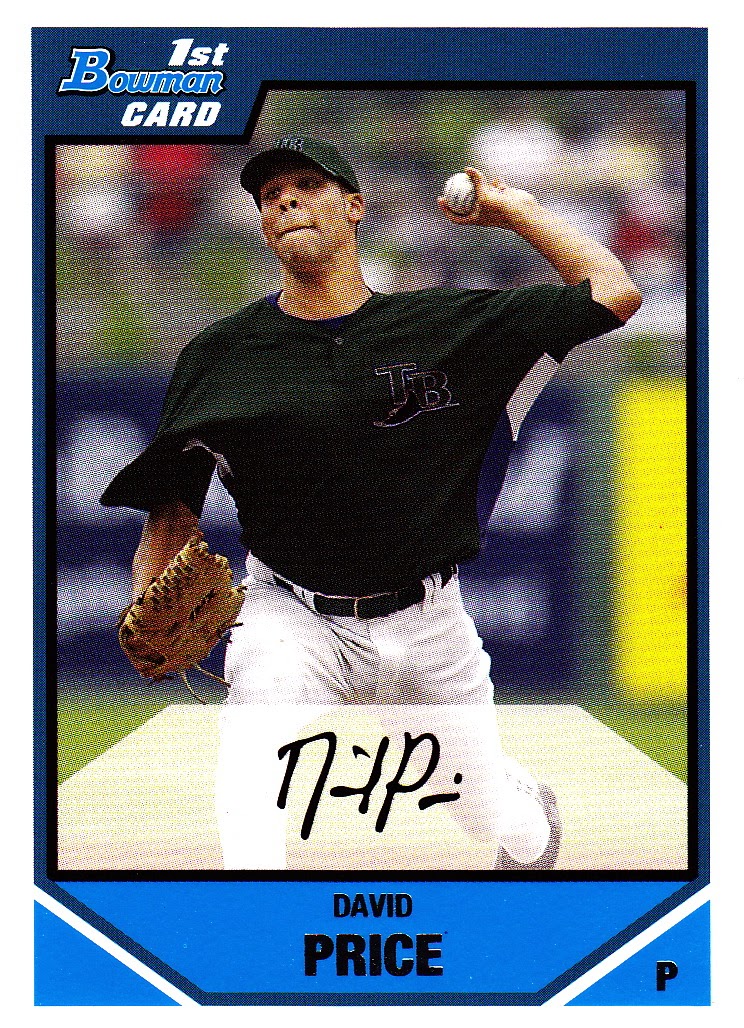