Alright here's my last post about the autographs I got at FanFest this year.  Both of these will proudly join my other 8x10s that I have hanging on the wall in my office/mancave.  Without further ado: 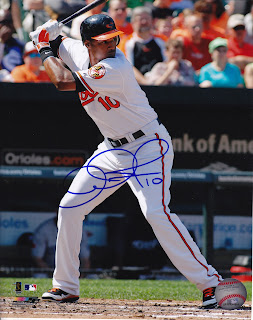 Adam Jones in a nice classic batting stance ready to swing.  I've gotten Adam's autograph TTM and even in one of the group breaks here on the blogs but never in person.  My thinking is that I better get his autograph while I can since he's been linked in trade talks to any team looking for good young ballplayers.  On a side note, I was reading an interview he did during the event that said he is open to a contract extension and staying in Baltimore for a long time.  Apparently he loves playing in Baltimore and wants to be part of the future here.  This is contrary to what has been "the popular opinion" in the media that he covets playing for a team closer to his home in California.  I personally would like to see him stick around for a long time as long as he continues to produce on the field. 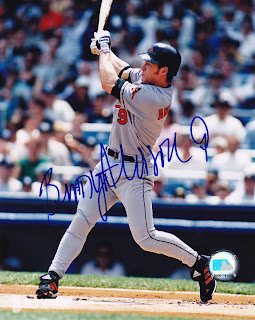 From the present center fielder to a past center fielder. BRADY ANDERSON!  Obviously this is my favorite item of the show.  I've been a Brady fan since him and Cal were fixtures in the Orioles lineup.  It was a thrill to meet him and get his autograph in person.  Until recently, he hadn't been around the team much since his retirement so getting his autograph has been a little tougher than usual.  I'm very happy that he is back in the organization and is working out with the younger orioles players and teaching them about the game.  Brady is still in great shape and it looks like he could still get out there and play at a high level.  I don't think there is anybody better qualified to show these guys the ropes like Brady can!

So, that concludes my FanFest experience for this year.  I'm already looking forward to next year when Mike Mussina makes an appearance!  I can dream!
Posted by Ryan H at 7:28 PM