Let's continue with my new memorabilia that I got at FanFest.  Up next are the baseballs I had signed. 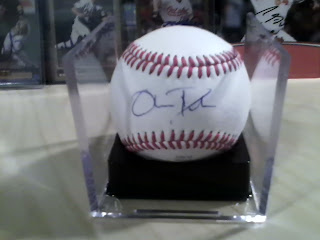 I didn't originally plan on getting Oliver Drake to sign a ball for me.  Heck, I didn't even have an autograph ticket for his station.  William was good enough to trade me this ball for the Joe Mahoney one that I had signed at one of my 2 sessions.  I already got Mahoney on a card last summer since they are a little more my thing.  Back to Oliver though.  He's one of the top pitching prospects in the O's system right now.  He cruised through High-A Frederick last year and was promoted to Double-A Bowie where he had a couple bumps in the road.  Hopefully he makes the adjustments and continues his ascension up the minor league chain. 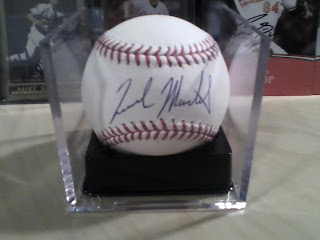 This brings me to my second favorite item of the whole show.  Nick was a pleasant bonus at the 4:40 station that I had a voucher for.  Yeah, I know as big of a fan as I am of Nick, he was playing second fiddle to another player at the table!  I'm happy to add Nick's signature on this ball though.  Ir really looks great on a brand new pearl ROMLB.  It will now sit proudly between my signed Mark Reynolds #136 HR ball and my signed Cal Ripken retirement logo ball.