Scott sent me an email about a week or two ago stating that he was going to be sending packages out and he had some cards that I might be interested in.  Of course I accepted the trade and waited.  Fast forward a bit and a package shows up at my doorstep.  Here's a few that I liked: 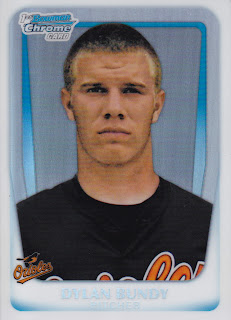 Obviously, this is a Dylan Bundy card from this years Draft Picks set.  Not so obviously, its a refractor.  I'm very pleased to get a surprise trade package with the Orioles top prospect refractor card in it.  I was looking at the back and it has his stats from his senior year in high school.  He pitched 71 innings, went 11-0, struck out 158 batters and had an ERA of 0.30.  Nintendo numbers.  It also states he hasn't eaten a hamburger in over 2 years. 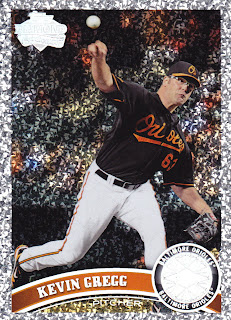 Switching gears from a really good pitcher to a slightly worse than awful pitcher.  Readers of my blog know how much I despise kevin gregg.  Regardless, I still needed this card for the team set.  He was a no-show at FanFest because his house was flooded out.  It's too bad he wasn't able to sign autographs for all of the O's fans that "hadn't developed a taste for his style of pitching".  Ass Clown...

Scott also sent along some '74, '77, and '78 Topps cards for my long term collecting goal of completing all of the semi-vintage Topps sets.  That's 1974 through 1980 for those of you not familiar with the semi-vintage that I just made up 15 seconds ago.  Semi-vintage, hmmm...  kind of has a nice ring to it.  I see if I can get it to stick.

Thanks Scott for the nice package of cards!
Posted by Ryan H at 5:44 PM