I recently was able to swing a nice trade with Jason of Joe Average Card Collector.  He's somewhat new to the blogging world but he's been a collector for long time as far as I can tell.  At first I mixed him up with another blog called I Am Joe Collector.  Pardon me, I can be a little slow to figure things out the way things have been going around in my head lately.  Jason is on the ball and he already was able to post up his goodies from the trade and you can read about them right HERE.
Here's some of the nice collection pieces I was able to get: 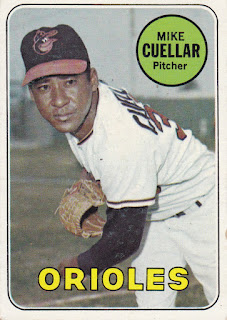 When I started blogging I hardly knew anything about Mike Cuellar.  I used to think that Vintage cards were old and crusty and that they were prohibitively expensive.  I just avoided them like the plague because I thought they were poor quality and the photography was awful. Now after reading about vintage cards and knowing more about them, I feel the exact opposite way.  The perceived flaws now have become strengths in my eyes!  Take for example the Mike Cuellar card that will go into my One Card of every Oriole binder.  I love action on my cards but the posed shot and the simple color scheme made me chose this card to go into the binder as my favorite representation of Mike Cuellar. 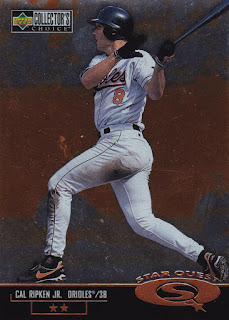 Jason also sent me a nice stack of Cal Ripken cards I didn't have before.  While this foil board insert didn't scan for crap, it's still one of my favorites from the package.  BTW, this package takes me over 1200 different cards of Cal in my collection! 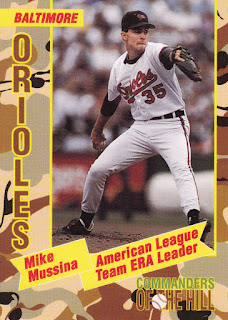 I had never heard of the commanders of the hill cards before.  I'm glad he sent it to me as it's a nice addition to my Mussina binder. 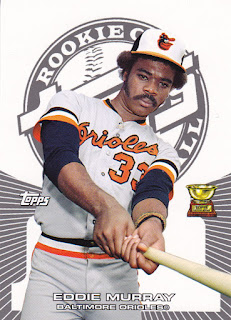 This card of Steady Eddie will go into my team set binders.  I think I need a couple more Orioles from the set to finish it off.  There's a ton of parallels but I think this is the base version.  Please correct me if I'm wrong. 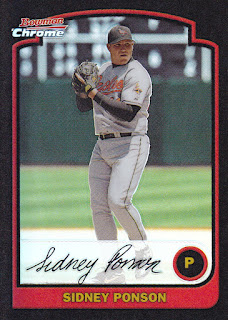 I'll close out the post with a refractor of the loveable drunkard Sir Sidney.  Oh how we were all fooled into thinking you were going to turn into an ace pitcher.  Instead you turned into an out of control idiot with pumpkin seeds for brains!  I kid, I kid!

Thanks Jason for the awesome trade!
Posted by Ryan H at 8:06 PM