Trade with Ryan of Ryan's Pitch

Here's a trade that came together rather quickly last week.  Ryan from the excellent blog Ryan's Pitch posted up a wantlist for some 2012 sets he's trying to finish up last week and I was happy to help out (and clear some room out of my commons boxes).  I was very happy to be able to get these cards in return: 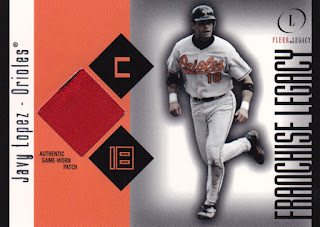 A Javy Lopez patch card!  If I remember correctly, this one is numbered 70/100.  I vaguely remember Javy's time in Baltimore since it was a time when I wasn't collecting much or paying that close attention to the Orioles.  I do remember my roommate at the time who was a Braves fan being pretty upset that Javy switched teams.  I guess it was the personal connection he had since he had seen him play in person for the Braves Triple-A team at the Diamond here in Richmond. 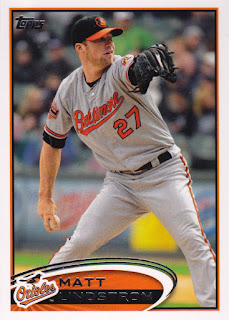 There's a rumor that the Orioles are interested in bringing back Matt Lindstrom to the flock for the upcoming season.  I'd welcome that move since he pitched really well during the 2012 season before he was shipped off to the Diamondbacks in exchange for Joe Saunders.  To be quite honest Lindstrom would be preferable in my eyes over the re-upping of Saunders.  You can't teach a 98 MPH fastball that Lindstrom possesses but  we don't need to sign Saunders to a multi-year deal that blocks the path of Dylan Bundy and Kevin Gausman to the major league rotation. 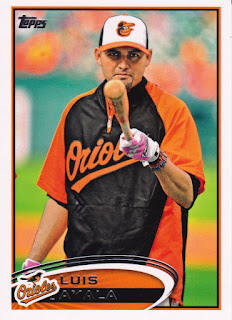 Luis Ayala pitched really well of the O's this past year.  I really hope that he can keep it up this year.  For once, the Orioles bullpen has some stability and reliability.  This particular card is one of my favorites of 2012.  It's like Luis is pointing the bat at the photographer saying "don't even think about making fun of my pink batting gloves, my daughter gave them to me!" 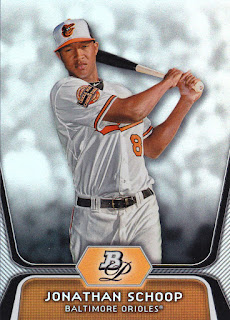 The next big offensive prospect in the Orioles pipeline is Jonathan Schoop.  I've gotten his autograph in person a few times and he has been quite pleasant each time.  I believe he is going to start the year in Triple-A Norfolk playing everyday.  He played very well in the Arizona Fall League after having an average season at Double-A Bowie.  I'll be following him closely this year to see how he's progressing!

Thanks for the trade Ryan.  I hope we can get together on another trade soon!
Posted by Ryan H at 10:27 PM