Well, I didn't expect to ever have to post on this blog again.  My last post was on December 21st (the day that the Wayans Brothers Mayans predicted the world would end).  Since the Mayans were wrong and Christmas still came, I'm coming out of my holiday hangover and posting a couple of hobby related things I got as gifts.  The first thing I got was in my stocking.  My sister in law dropped in one of the Super Ultimate Jumbo packs that are readily available at Dollar Tree.  I usually resist buying repackaged cards since they usually contain a bunch of overproduced cards from the late 80's/early 90's era  and sometimes they can be a bit beat up since most of the clientele at the dollar stores could give a rip about my hobby.  It's the thought that counts and my sister in law Caitlin did a good job of thinking of me while purchasing gifts (she also bought me a CD that was on my list).

As I was rifling through the cards, I did notice a strange trend of the player selection.  There were 2 of just about every player: 2 David Seguis,  2 Kevin Browns, 2 Adrian Beltres, 2 Jeromy Burnitzs.  Here's the nicest Edgar out of the pack: 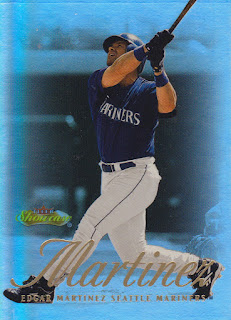 If there weren't 2 of the same player, there were 2 players from the same team: 2 Rockies, 2 Yankees, 2 Expos, and like the following 2 cards: 2 Astros: 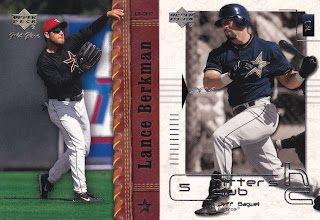 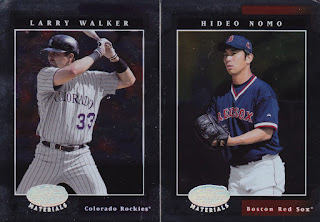 I think the only card that was he odd man out was my "Super Star card" of Christy Mathewson.  As I was opening the pack the next day, one of those Prime 9 shows was on MLB Network showcasing the top 9 righthanded pitchers of the modern era.  Who was number 2?  Christy Mathewson. 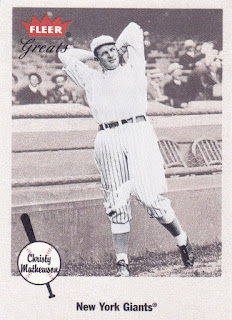