I say pack rip but it could have been an entire blaster.  It's been a while since I opened these cards I don't remember!  Anyways, I'm not the biggest fan of Opening Day but at least its not a dang reprint set like Heritage or Archives (Think of something ORIGINAL Topps). Anyways, I need to get these cards off of my desk so I either need to trade some of 'em or put them in my monster boxes. 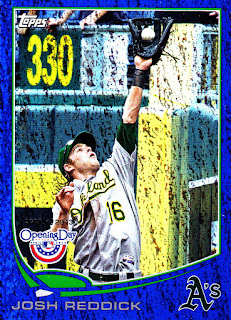 First off I got the Blue Sparkle Opening Day parallel of Josh Reddick.  The green uniform really clashes with the blue on the border but I guess nobody really cares because nobody collects A's cards anyways.  I also got a Doug Fister.

I got 3 Mascot cards too.  Why do some of the mascots have their real names on them and others only have the team name.  I did a little research on these 3 particular mascots from the past couple of Opening Day sets just to make sure that Topps didn't forget their names over the years.  These days your really have to watch Topps because they can take your money, punch you in the head, and steal your car before you know what happened! 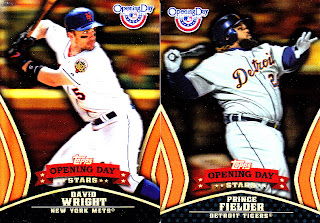 Moving on to some of the other inserts, I really like the 3D effect on the Opening Day Stars.  Obviously hard to see on a 2D computer screen but they are really classy looking cards. 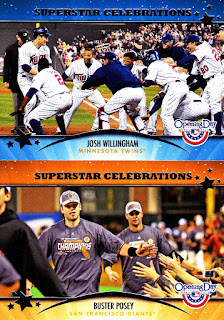 The Superstar Celebrations cards really don't do that much for me even though it is a cool idea for an insert set.  Maybe the design is what is bothering me. 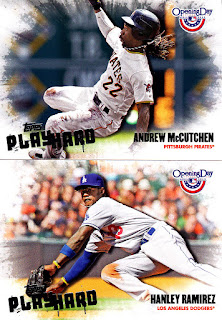 The Play Hard insert set is new this year.  It's a neat idea to make an insert set of players giving 100 percent effort.  At least that's the impression I get from these 2 cards of McCutchen and Ramirez.

Last, I got 2 of the Fun at the Ballpark inserts.  I got the 2 I really wanted from the set.  Adam Jones and Manny Machado.  I'm not going to show them because they are already put away in my binders and also because the whole pie in the face act is a little tired.  I really wish Jones would stop this stupid postgame tradition.  Just slap the guy on the ass and tell him he played a good game and move on.  But you can't even do that anymore without going to jail for 30 days anymore!

Here's a full listing of what I have for trade.  I have a bunch of base cards that aren't listed so just send me your needs.