I'm almost caught up with the retail purchases that I made earlier this Spring.  I've been a big fan of Bowman in the past but recently I've started to lose interest in the product offerings.  For the first time last fall I didn't collect the annual Draft Picks and Prospects set.  I decided not to collect the regular Bowman set this year either.  I'm not sure what has started to make me turn my attention away from Bowman but I guess I'm going to save some money now!

Even though I'm not collecting the set, I still picked up a total of 3 blasters.  While not usually a fan of blasters, I usually buy rack packs, hanger boxes, or value packs.  I could have bought a hobby box for that price but this time it was worth me buying blasters.  You'll see why if you keep reading.

Everyone has seen the base set design.  No need to rehash it.  The first 2 blasters I got had great collation.  Not a single dupe.  I should have stopped there.  The 3rd blaster I got was a mix of the first 2 blasters almost card for card.  Even the gold bordered parallels were almost the same!  It happens but it would have been nice to get more than one Oriole card out of the entire 3 boxes!

Onto the inserts we have the crappily scanning Top 100 inserts.  I got #73 of some Red Sox guy who used to be a Dodgers guy.  Not sure what the white speckles are in the scan.  I was not eating powdered doughnuts over the scanner. 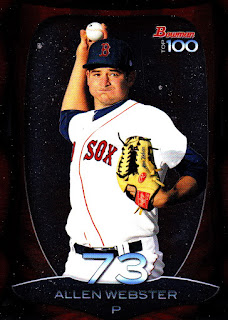 My lone refractor was of this Jello-Itch guy for the Reds.   This was just about the only different card in blaster box #3.  The advantage of getting a lot of doubles was that I got 2 base and 2 chrome Prospect cards of Byron Buxton and Carlos Correa so there's that! 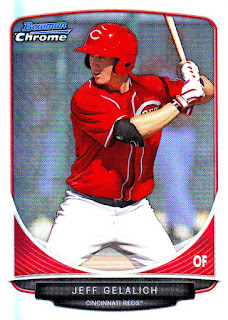 I destroyed the odds (I like to think so) on getting 2 Orange bordered parallels from box 1 and box 3.  The Darvish is on hold for right now buy please send me your best trade offers for the Maronde. 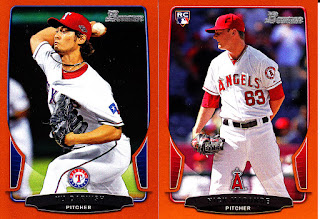 This nice little autograph came out of blaster box #1.  I think this card is what inspired me to buy another blaster of the product. 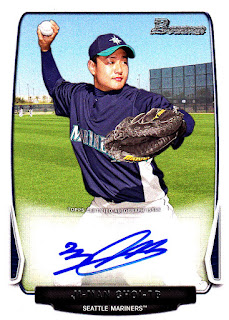 So I got this autograph in the second box.  Not too bad.  I was inspired once again to buy a 3rd blaster but the House won that time and stuck me with a ton of duplicates!  Buying packs is a mild form of legal gambling in Virginia I'm convinced and it usually kicks me right in the butt! 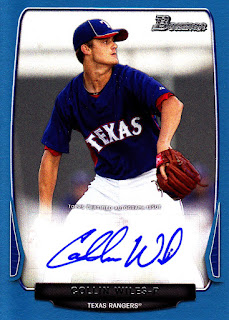 This one is also on hold, pending a trade.
I was on a 3 blaster streak of pulling autographs going back to my Gypsy Queen blaster in April.  I tried rolling the dice again and my luck ran out!

Overall, Bowman has a pretty nice design this year but I'm not collecting it just to collect it like I've always done.  I really used to enjoy reading the Scouting reports on the backs of the cards in the past but I just don't have the time or patience to do that any more.

Here's a full listing of the notable cards I have for Trade:

I have a bunch of base cards.  Send me your list and I'll try to knock some of them out: