I've been absent from posting here for nearly 2 months.  I've got plenty of excuses though!

1.  Traveled to Japan for 2 weeks in early May
2.  Been watching the Orioles on TV.
3.  Topps sucks sometimes
4.  Springtime means plenty, PLENTY of yard work.
5.  The beginning of my adult baseball season.
6.  Finding Video Games as a more worthy pastime than blogging.
7.  Too hot in my "MancOve" to stay and look at cards and write about them.
8.  Family functions.
9. Being too tired to type cohesive sentences.
10.  Working tons of overtime.
11.  General malaise about blogging.

I have been picking up a few blasters here and there as well as some nice Ebay items that I want to show off.  These have been in my draft folder for about the same amount of time I've been away.

A Nolan Reimold Silk card from Ebay.  I forgot how much I paid but I know it was less than 15 dollars.  Hopefully Nolan gets back from the DL soon and starts punishing baseballs like we know he's capable.
It's numbered 30/50, which is an Ebay 1/1 since 30 was the number he wore in the minors. 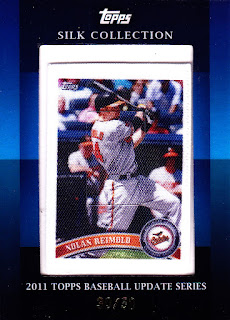 Second Pickup is this Nick Markakis Clubhouse Collection GU from this years Heritage.  While I have my issues with Topps Heritage, I'll say that this year's relic cards look nice and the gold/bronze numbered versions are even nicer.  This one is an Ebay 1/1 since 94 is the year that Nick and me turned 11 years old. 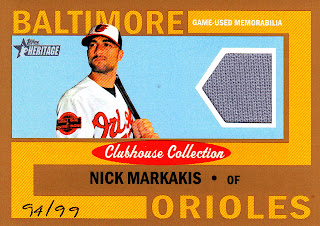 Nothing really remarkable about the front of these auction wins.  They look like the regular old base card. 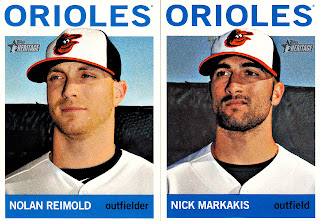 Turn them over and it's a whole new ballgame.  These are the covert Venezuelan black back parallels.  I score both of these for under 5 dollars a piece!  Not too shabby. 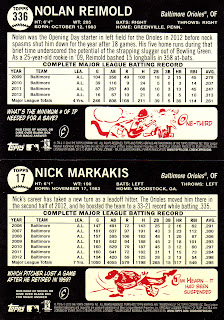 Finally a few more gold cards.  These are gold refractors of Nick the Stick from the last 2 versions of Bowman Chrome.  I got the 2012 version on the right during the Super Bowl.  (yeah these cards have been in my draft folder for a while!)  While everybody else was stuffing their faces with Buffalo wings and watching overhyped commercials, I was getting deals on Ebay!  I snagged it for about the price of a hobby pack of Gypsy Queen.  There's no cool story about the 2011 that I can remember, but it's just a cool card! 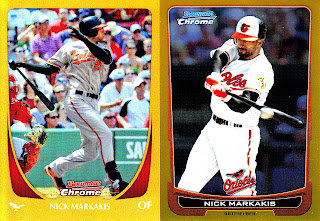 I plan on sharing some pictures from my Japan trip here on the blog as well as some of the cards I've picked up recently.  Just bear with me, time is not kind to me these days!  I'll get around to it eventually!
Posted by Ryan H at 7:00 PM