I think I bought these not long after they were released back in April or something.  I'm just now getting around to writing up a post about it!  Even though this is a retro-themed set, I still like it.  At least with it being a retro themed set and not an exact reprint I can appreciate it a lot more than I do Heritage or Archives.  I just think Topps cheats when they put new players on old, tired designs.  If I really want to see 1964 Topps or 1990 Topps (yuck!) I'll go and get the originals!  Anyways, I've been ragging on Topps pretty hard lately and I have my reasons that I might rehash in a future post.  If I feel like it, which I probably won't because it will probably come out as old-fashioned belly aching!

So onto a decent product called Gypsy Queen.

I'm not going to show the base cards since everyone saw those almost 3 months ago.  I got some SP's too but they look like the regular base cards so what's the point in showing those either? 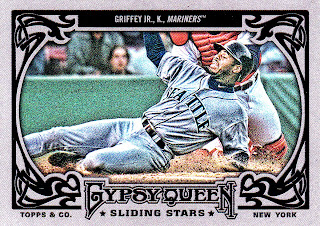 Topps did have enough creative energy to think of some nice insert sets this year.  First up is the Sliding Stars.  Other than this insert set you don't see a lot of sliding players as the main attraction on cards these days.  Out of the packs I busted this Griffey is my favorite. 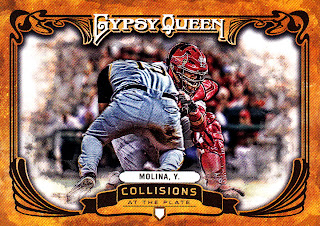 Next up is the Collisions at the Plate.  This card actually shows a collision unlike the others I got in my breaks.  Those just show players sliding around the tag at home.  I'm kinda disappointed in the execution of this insert set a bit. 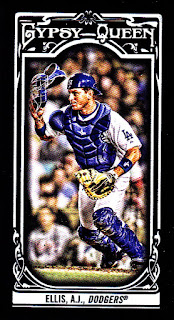 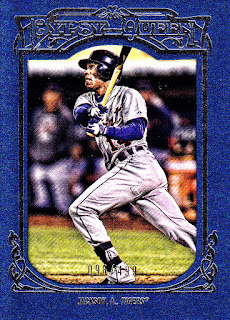 Next up the blue bordered framed paper whatcha-ma-call-it.  The blue matches the Tigers uniform color which is nice.  The only problem with this card is it came out of the pack slightly damaged.  One of the upper corners was dinged but you can't tell it by looking at the front. 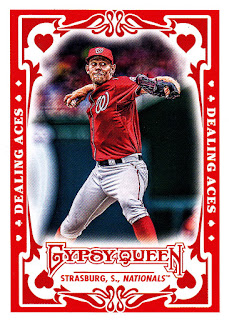 I also am a fan of the Dealing Aces Insert set.  I honestly never thought that I would see hearts on a baseball card though! 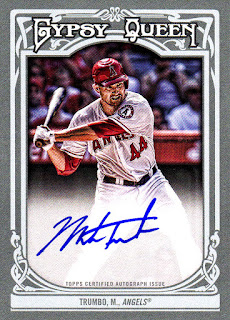 The last card I want to show off is some ink!  I think I beat the odds pulling this Mark Trumbo autograph.  Not much to say about Trumbo other than he's on one of my fantasy teams.

Once again I didn't get much in the way of Orioles card except for a Wei-Yin Chen White Framed Paper card.  No Bundy, No Manny, No Cal.  Can't win them all.

Everything pictured is for trade in addition to these listed below.  Send me your wantlist if you need base cards: