My Obligatory Two Cents on 2014 Topps

Now that most of the 2014 Topps series 1 hoopla has died down a bit, I think its time I do my obligatory review.  I feel that 2014 Topps has been universally been crapped on for some reason.  I don't think its that bad overall.  I agree that the design isn't as good as 2013 but they can't all be winners like the 1965, 1987, or 2009 flagship issues.  The tab in the right side of the card is unnecessary since there is a team logo on the lower left side.  The "swooshes" under the logo aren't that bad either.  I'm still waiting with baited breath to see the Night Owl post where he will "Define the Design"!

It's not for everybody but there are still plenty things to like about 2014 Topps. It's the first new release of the year (duh) and that means spring is right around the corner (yay!).  Disagree with me if you want but I'm running the show on this blog and if you don't like it, tough!

A little side note: I'm collecting the regular Topps set a little different this year.  I'm not going to build it myself.  I'm going to lie in the weeds and be a cheap-ass. I'm going to wait until the hype dies down and buy all 3 series on ebay and do it for less than 50 bucks.  Series 1, 2 and Update for less than the price of a factory set.  It can be done and it will be done.  I just don't have the resources to bust hobby boxes and jumbo boxes to build the set anymore.  I have much less time to spend on my hobbies and I have even less energy to put towards them when I do have time.  Its just going to be easier and cheaper this way.

But I do have to do some scientific research.  That is why when I got my haircut last week, I visited Target on my way home to just conduct my experiments.  Oh who am I kidding, I just wanted to rip some packs! 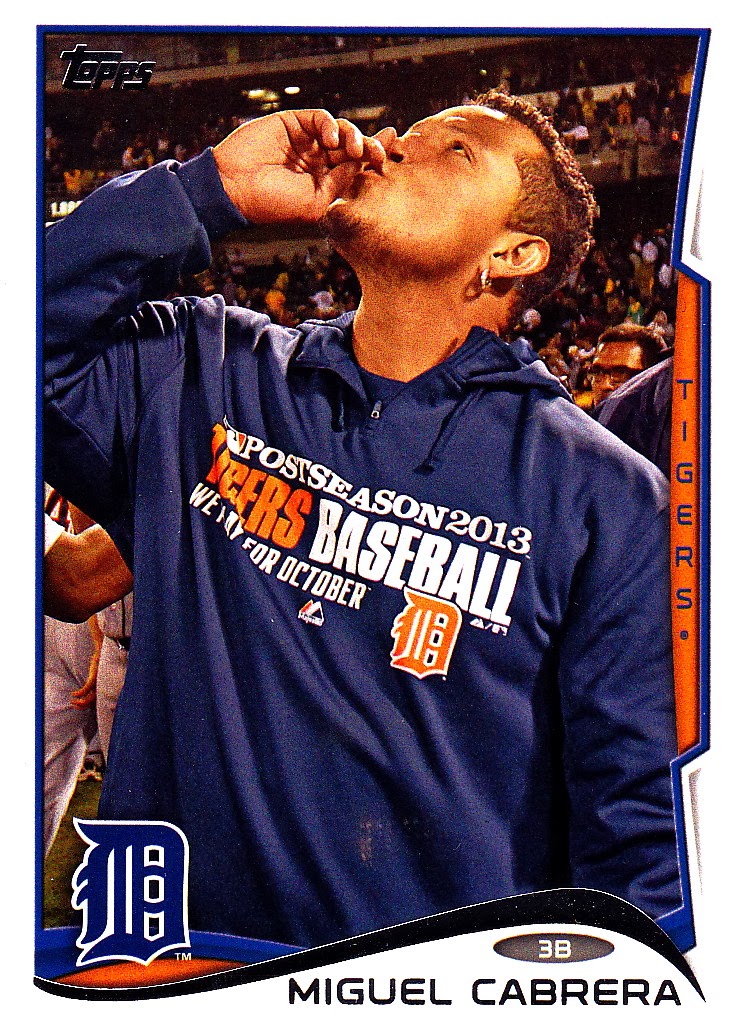 While I can't believe that Topps brought back those ridiculous sparkly fake twinkle cards after all the backlash they received in 2011, the postseason variations get a thumbs up from me.   Mostly, because I got one in my two rack packs but also because it just adds a little bit of fun to the cards.  At least the celebration cards actually happened in real life.  The twinkles or orbs or whatever they are called are just dumb. 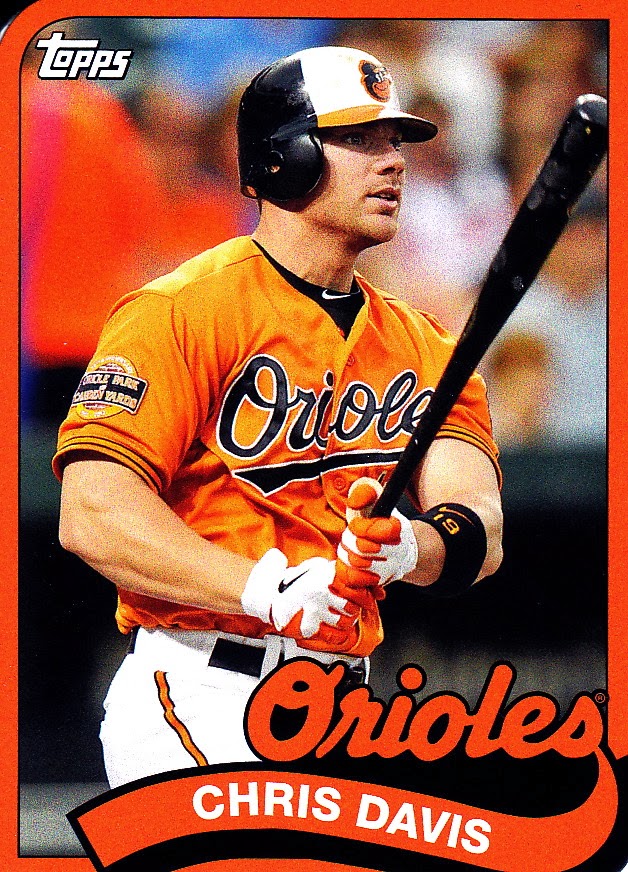 I can't complain about getting a mini of a player on my favorite team.  It's one less card I have to look for when I'm building the master team set.  I like the 1989 design but I'm not sure it needed to be diecut.  Maybe Topps is cutting back on inserts and killed 2 birds with one stone here? 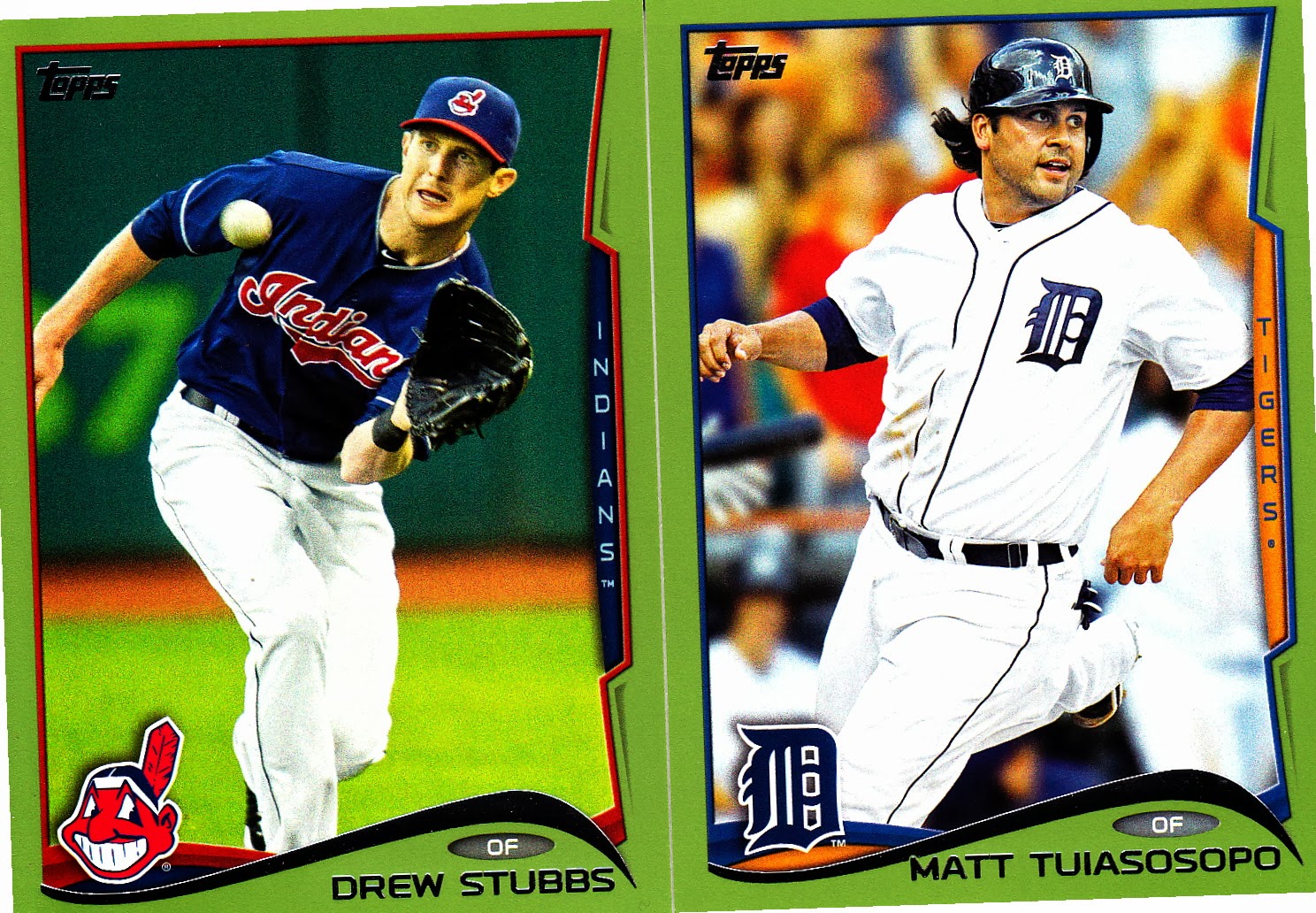 I've got a bit of a head cold right now and all I can think to call these is "Booger Green Borders".  These are rack pack exclusives.  I'm pretty sure we don't need anymore colored border cards.  I'm OK with Red for Target and Blue for WallyWorld.  Camo, Pink and Toys-R-Us purple.  I can't even see the Camos when I play with my cards outside in the woods, pink isn't even a real color (it's just faded Red) and Who the Hell shops at Toys-R-Us for cards?

Apparently there are hanger box "Urine Yellow" parallels too.  Too many parallels for flagship.  The regular Topps set is about the base cards.  Well at least it should be.  Topps Chrome is where all the colored borders and refractors should be.  I don't think that any one is chasing and Matt Tuiaso- I've got to many vowels in my name -popo rainbow.  Really! 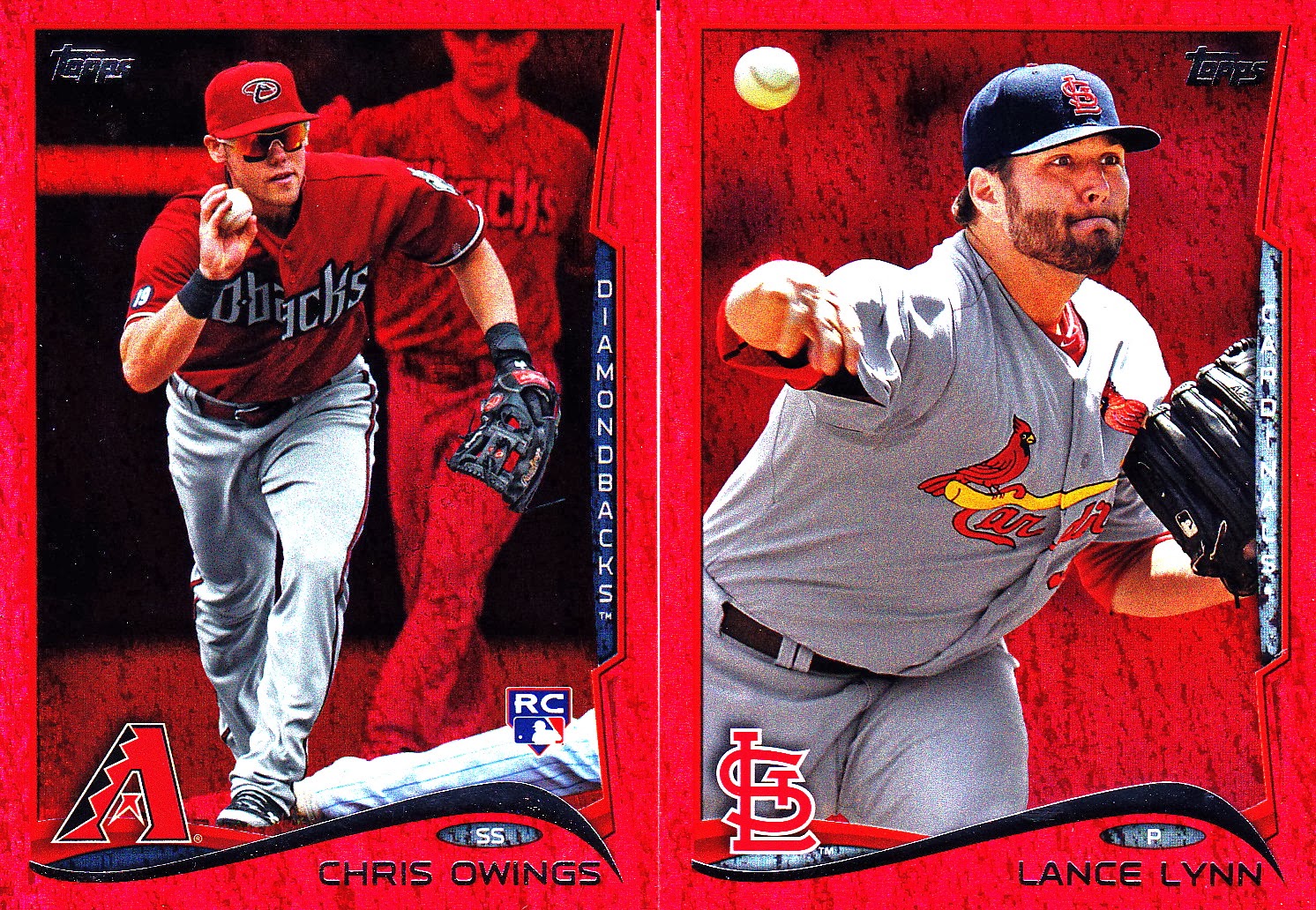 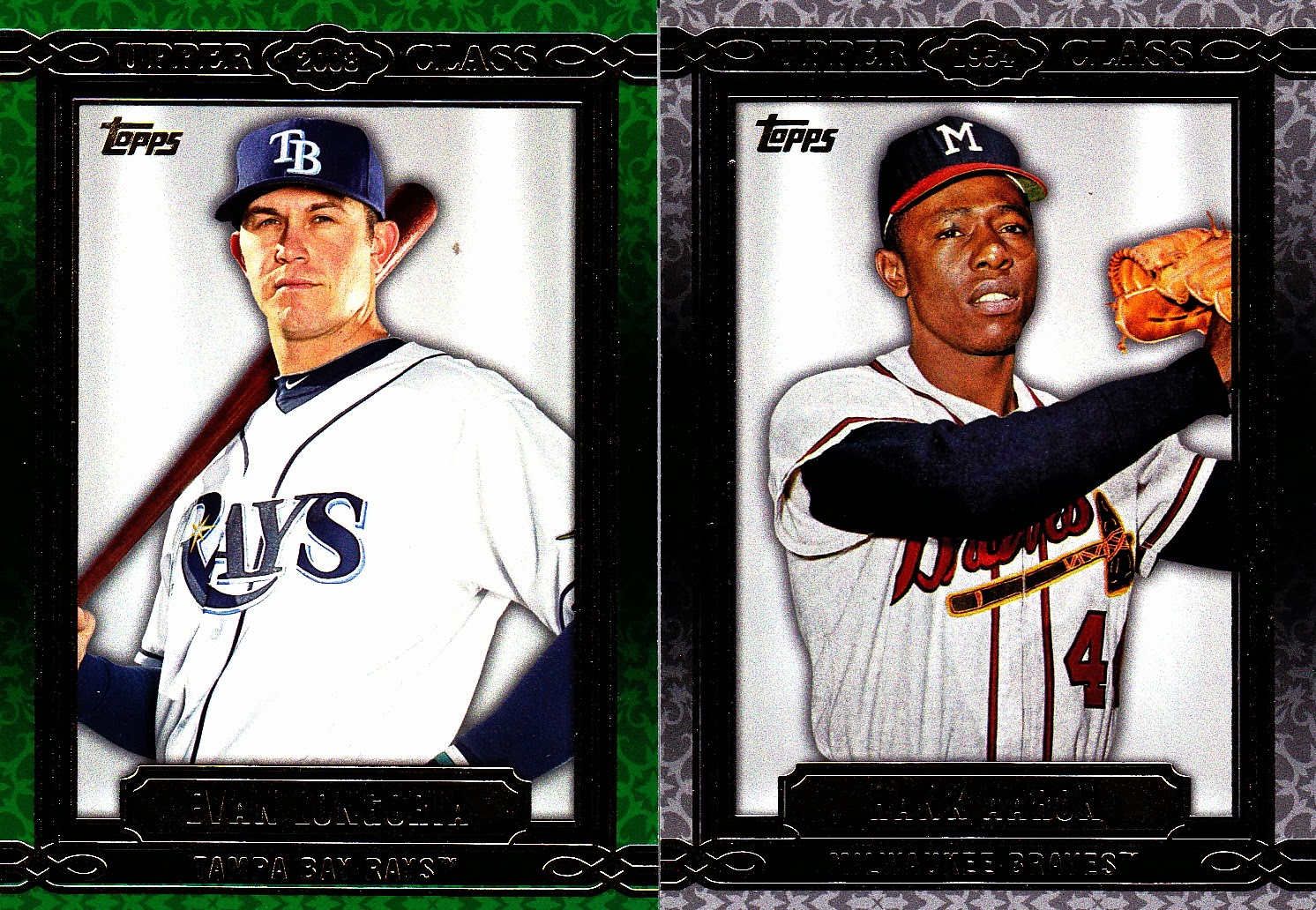 Not really a big fan of the Upper Class inserts either.  The borders are distracting and TOOOO MUCH FOIL. 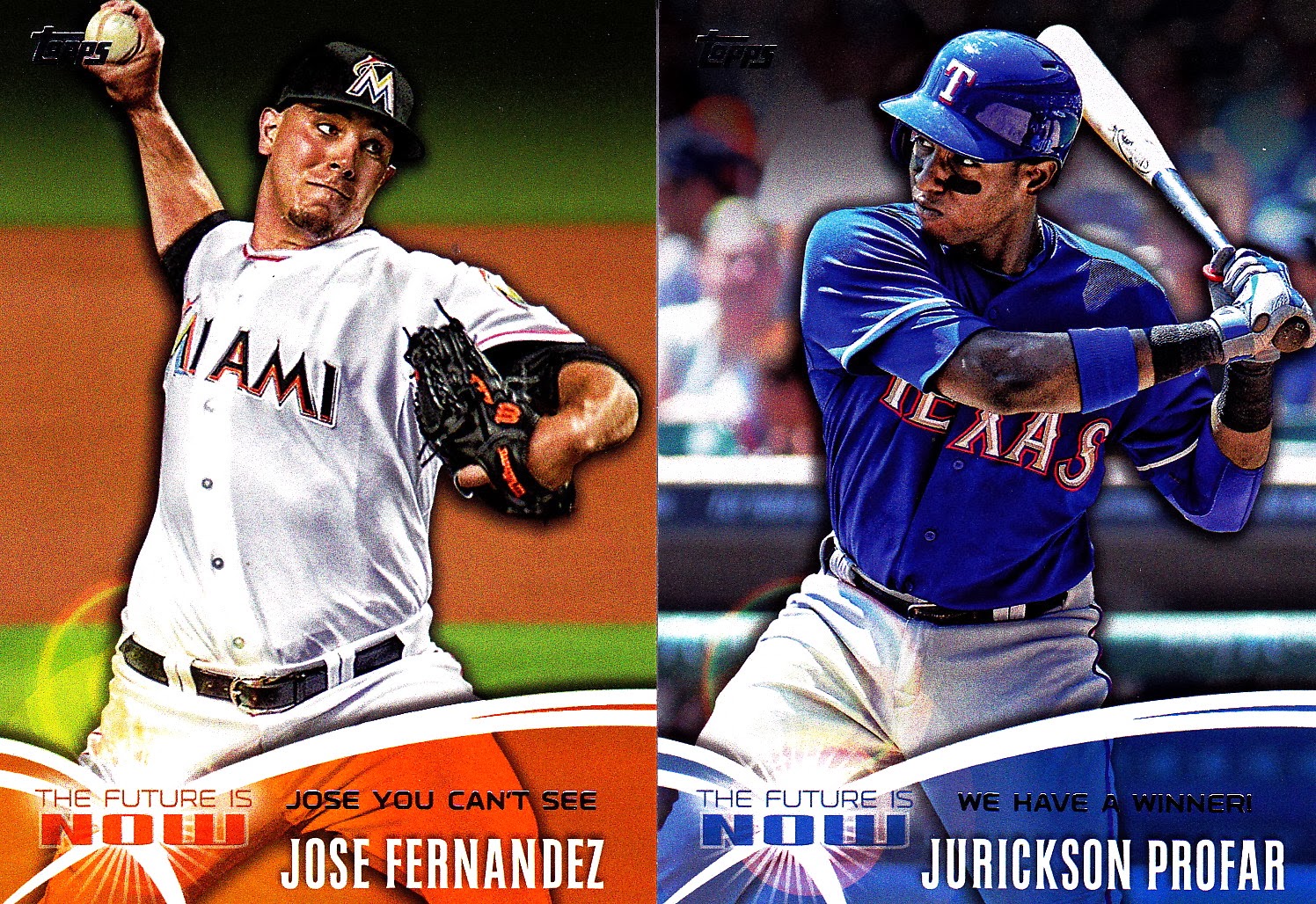 I don't really get these either.  It's a 30 card insert set with 13 different players spread out.  Some players get 3 cards, most get 2.  From my count there are 15 "Future Stars" in the base set.  Why not just give those 15 players a single  "The Future is Now" insert and save the other inevitable 15 Future stars from series 2 and give them a single "The Future is Now" insert?  < Is this a run on sentence? Does it make sense?   Speaking of making sense, does some of the headlines on the fronts of the cards just don't make sense.  "Jose You Can't See" (above) and "Boogya" (on one of Manny Machado's cards) are just dumb.  I think the set could work with out the headlines. 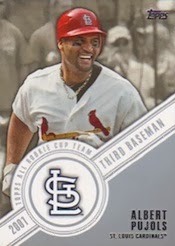 Another insert that I've already traded away was the All-Time Rookie Cup Team. I got the Johnny Bench but swiped this Pujols example from the interwebs.  Since it is the "Topps All Rookie Cup Team", don't you think there should be a ROOKIE CUP somewhere on the card?  Really?  Oh sure there's a manu-relic version but come on, they could have printed one on here somewhere!

So to wrap things up, 2014 Topps isn't all peaches and cream.  It does contain some head scratchers but it isn't all bad.  Topps took some chances with this year's flagship and most of the ideas have fallen on their face.  I think if Topps just went back to basics for the regular set and leave the higher thrills stuff for Chrome, Ginter, Gypsy Queen, etc. they would be better for it.

Everything pictured here except for the Davis and Pujols is for trade.
Posted by Ryan H at 7:29 PM