Welcome to my brand new series that I'm very excited to bring to the blogosphere.  I will start off by saying that this is not my own idea but one that I am borrowing from Johnny of Cards from the Quarry fame.  His blog is one of my favorites since he comes up with so many innovative and original ideas.  He also does a great job of creating a custom card for each and every player in his Quarry Unlimited set each year.

I became quite interested in the draft around the year 2000.  I was in high school at the time and playing varsity baseball.  I knew several of my friends had a chance to be drafted as well as players/friends on rival teams in our district.  Some of my buddies went on to play ball in college after we graduated in 2002.  That year my HS team battled another team in the district who had a hotshot junior pitcher by the name of Harold Mozingo.  Our team beat him 3 times in 2002!  I even had a few hits off of him.  Trust me, standing in the batters box with somebody chucking low 90s heat is not easy.  I've been there and done that.  Harold went on to be drafted in 2003 by the Mets.  He didn't sign but went to Virginia Commonwealth University (VCU) and was drafted by the Royals in 2006.  He played several seasons for them in the low minors.  So that's my claim to fame, I hit off of a minor leaguer!

Anyways, back to my other claim to fame, this blog, I hope you enjoy reading what I've put together.  I'm going to re-evaluate the draft picks the Orioles made in certain years and see how those picks turned out.  I'm sure that the picks the Orioles made at the time were the correct picks and some look bad now.  But some turned out great.  The draft is a crap shoot.  I'm going to stick to Johnny's template pretty closely.  Only players that were drafted within the next 10 picks of the Orioles pick are eligible to be swapped out.  I won't swap out players from the 46th round into the 3rd either.  it just wouldn't have happened then so it won't happen now.  Most of the cards that I will be scanning will be ones from my collection.  There will be a few exceptions overall and I will get the images from COMC or other sources.

I'm going to start out with the first draft I remember.  1999.  The Orioles had a whopping 7 picks in the first round.  The Free Agent compensation was much different back then than it is now.  Teams who signed free agents had to surrender draft picks to the team that the player came.  There wasn't a qualifying offer back then either.  Just about every player that was a free agent had draft pick compensation attached to them.

So without further ado: 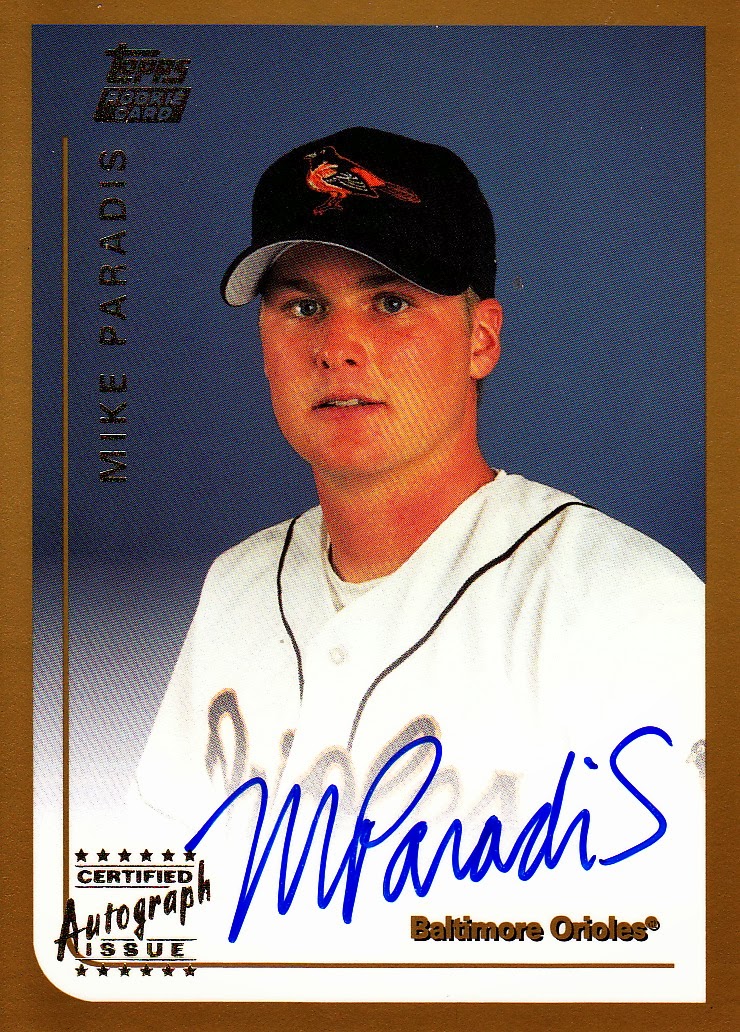 While picking 4th year college pitchers is usually a safer bet, drafting pitchers in general is a risky proposition.  Looking at Paradis's college career, he looked like a sure thing to make an impact in Baltimore.  Sometimes things just don't work out. 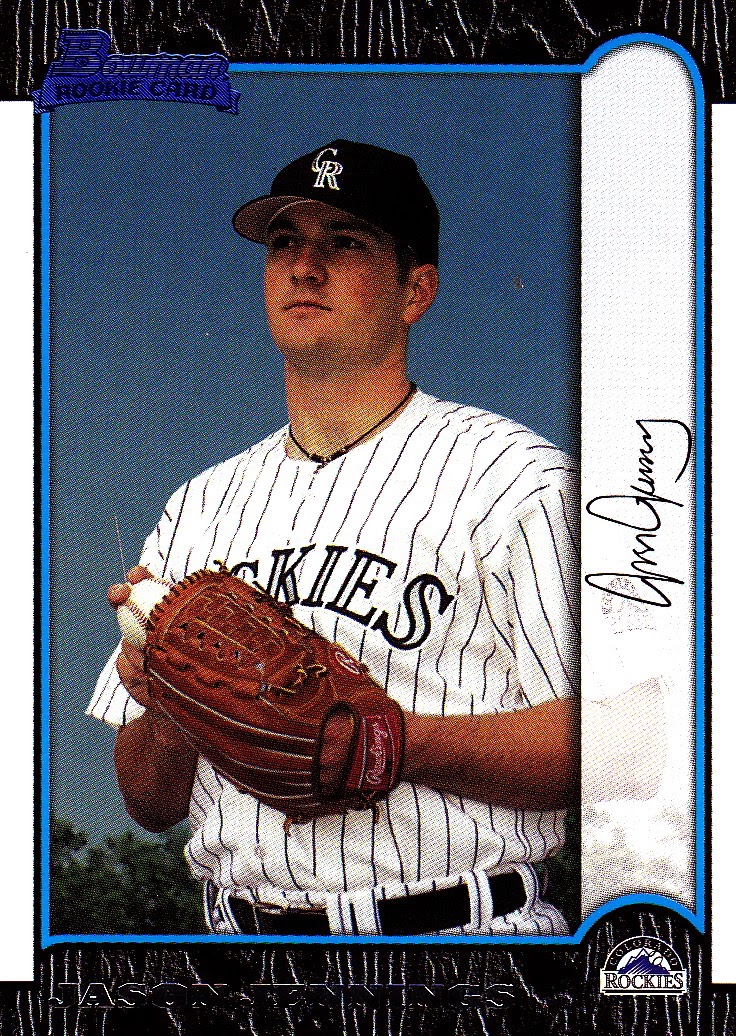 I think it's fitting that I steal Johnny's idea for posts and then I steal his pitcher.  Jennings was a fairly average pitcher in Coors Field.  I think I heard that he was a groundball pitcher somewhere though I could be mistaken.  Either way, I dare to say that he might have had better success in Baltimore than the thin air of Colorado even though both ballparks are notoriously hitter friendly. 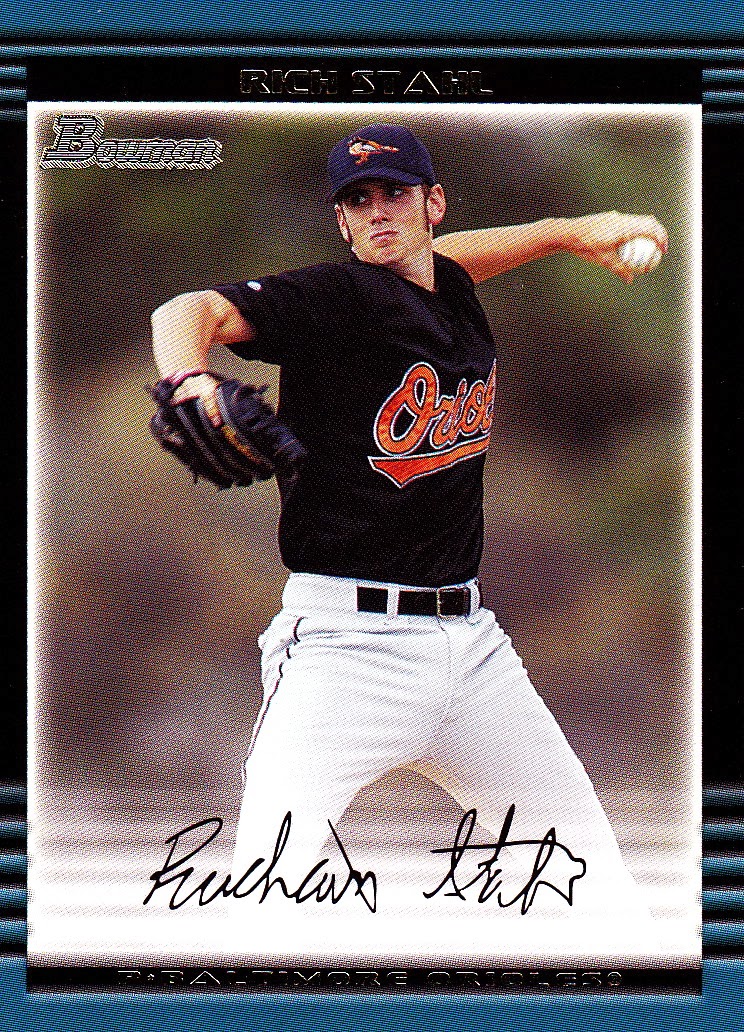 Drafting HS pitchers is the most risky pick teams can make.  They are more susceptible to injury since they haven't grown into their bodies and they lack the tutelage of college pitching coaches.  There usually is a huge learning curve switching to pro hitters.  Most dominant HS pitchers just blow away the hitters with pure gas and don't have to really "pitch" to be successful.  Pro hitters are pro hitters for a reason!

Back to Stahl, injuries plagued this guy.  When he was on the field, he was pretty decent.  Just staying healthy was a challenge. 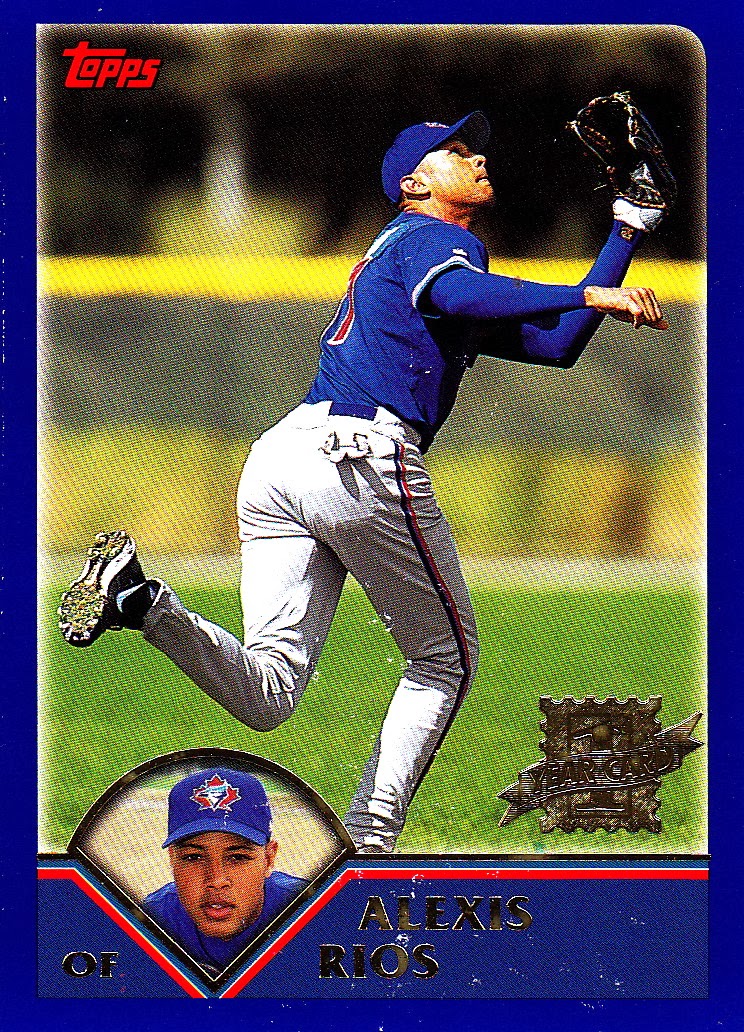 Yes, this is the same Alex Rios that is still active today.  Most of us have heard of Rios before.  He has gone onto a solid career so it's not hard to see why he would be a better pick here.  Bonus Fact: I've been to Guayanbo, PR on a business trip! 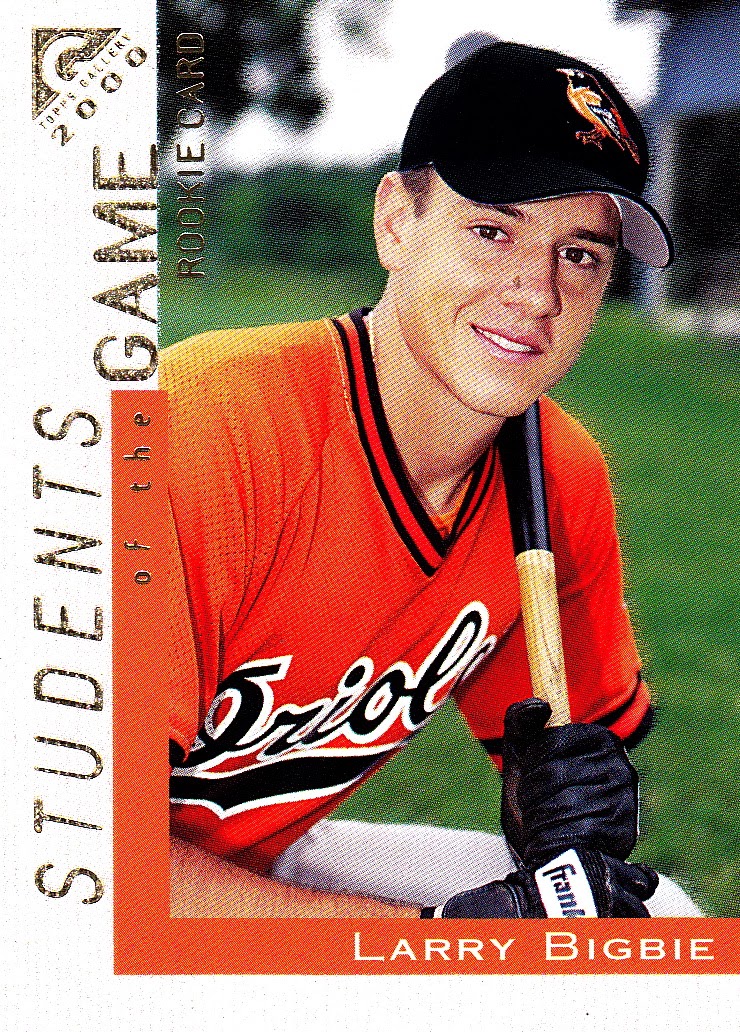 I think I am going to keep this pick.  Bigbie had a couple good years in Baltimore and then kinda faded away.  He was named on the Mitchell Report and that hurt him big time.
Bigbie is the first player I really followed through the minors when I was in my formative years.  I was learning about the draft and college players and how the whole farm system worked. 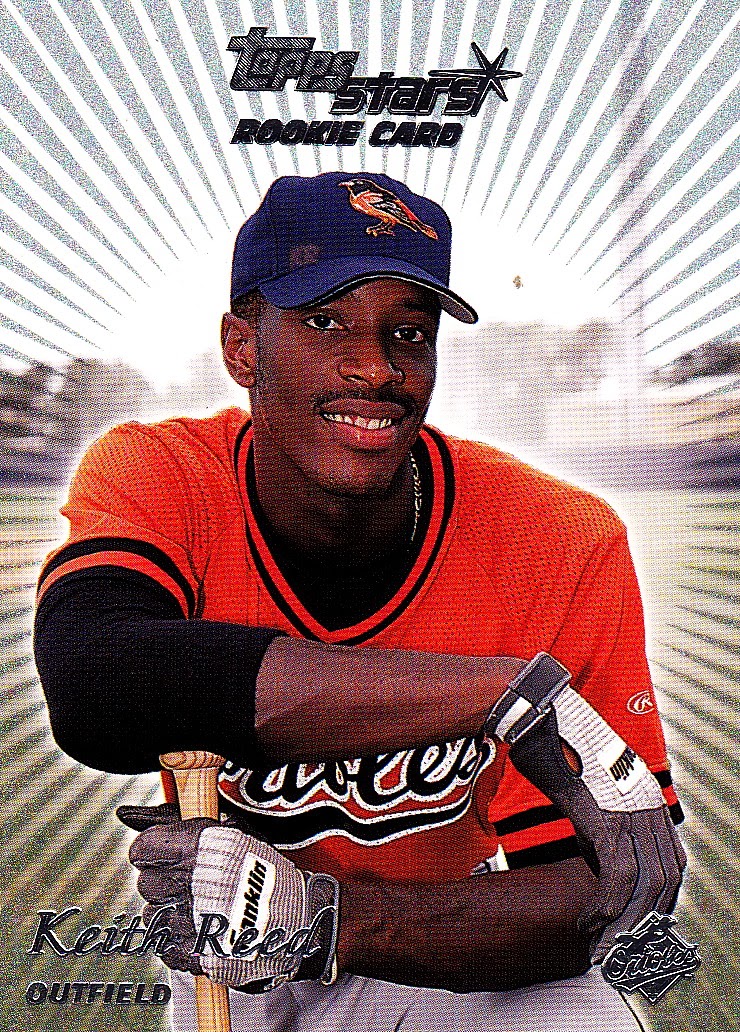 Reading the back of several of Keith's baseball cards, it seems he had tons of raw power and overall athleticism.  The Orioles have been drafting these types of players for a long time and more times than not they haven't panned out.  In his case however, I think it is Baltimore's fault for not giving him more than a shot in the majors.  He got 6 ABs with the varsity squad in 2005 and that was it.  If I was Baltimore and I had this guy in the minor leagues for 6 years having some decent success, I'd certainly have given him more than a cup of coffee.  It will always be a mystery to me why and for my own selfish reasons I'm keeping this pick because of what he might have become.  Sure Mike McDougal and Mr. Jennie Finch were drafted within the next 10 picks but Reed is my man here.

Not having a card in my collection of Cenate doesn't bode well for this pick.  Another high school hurler that injuries hammered.  He missed 3 full seasons and then had 2 cameo batting appearances in 2003 in SSA- ball.  Poor guy. 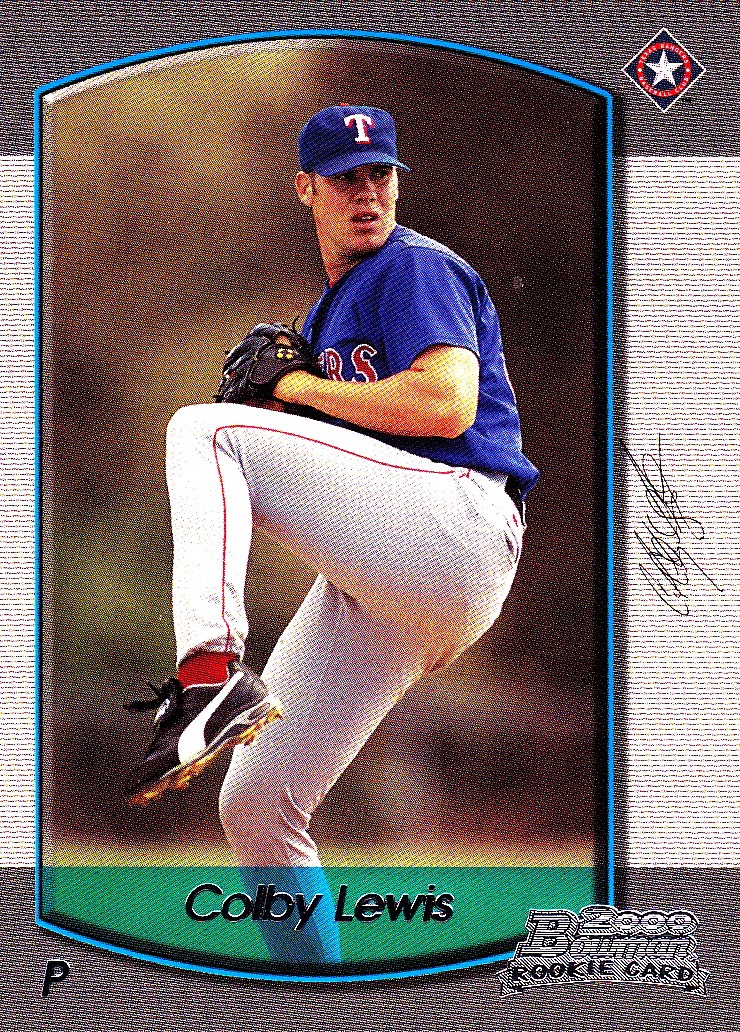 I had my pick between Lewis and Jerome Williams who have gone on to have decent success in the majors.  Lewis has had trouble staying on the field where as Williams disappeared for a couple years before resurfacing with the Halos a few years ago.

This guy has been around for quite some time.  He's the ultimate underdog story since I was surprised to see that he made his major league debut last April 1st, 2013 (no fooling!), nearly 14 years after being drafted!  Congratulations to Scott for chasing his dream! 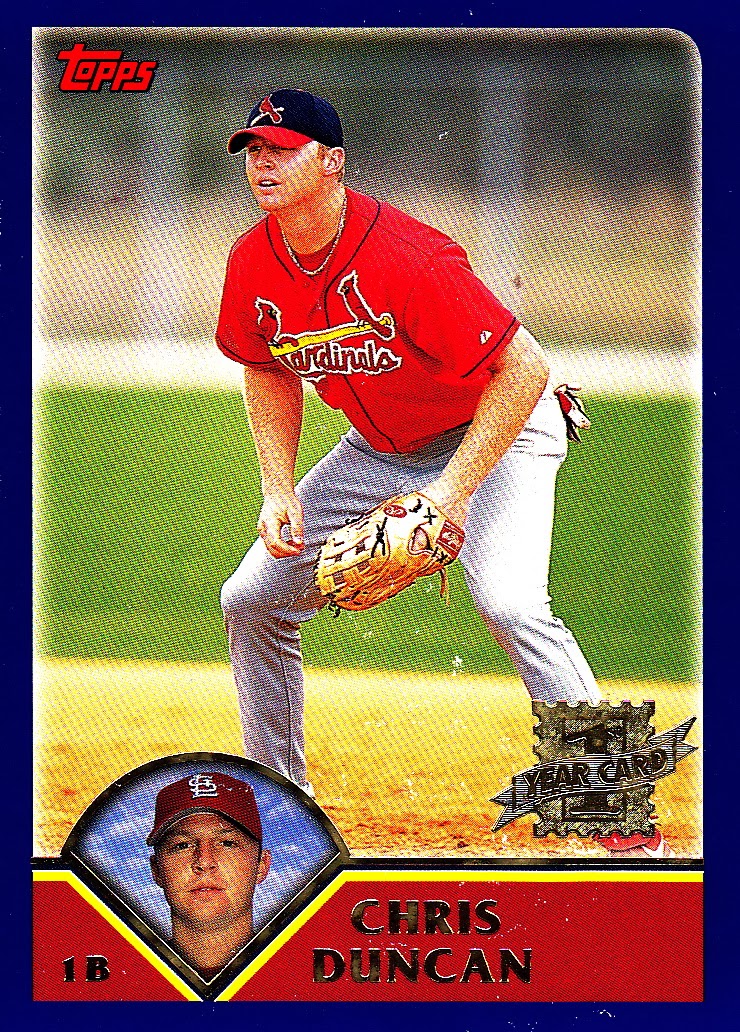 Duncan has Baltimore ties because his dad played for the O's in the 70's.  I think injuries derailed his career and forced him to retire but he had a few good seasons for the Cardinals before that. 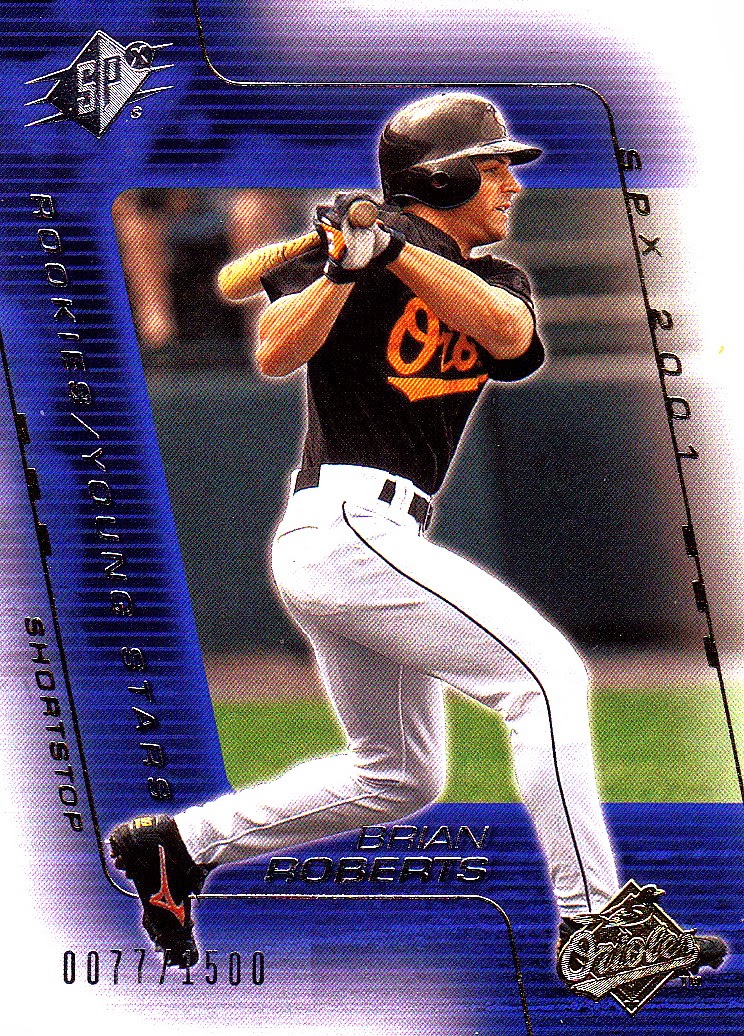 I don't think I really need to explain why I'm keeping this pick.  Roberts will more than likely be in the Orioles Hall of fame.  I could probably hand this section over to my buddy William and let him explain it a little more though he's still a little mad at him for joining the Evil Empire for 2014!  It's kinda crazy that a player like Roberts fell this low in the draft.  For every Matt Bush there is a Mike Piazza and every Johnny Bench there is a Matt Bush.  The draft is so much like scratch-off lottery tickets!

There are several interesting players drafted in the next 10 after Roberts.  Carl Crawford, Brandon Phillips, and Ryan Doumit are all solid players but not comparable to what Brian Roberts means to the Orioles.

I would guess that the scout that was watching Larry Bigbie also found Kessick since they were teammates at Ball State.  Looking at his minor league numbers, he was probably a catch and throw guy with a below average bat even though his caught stealing percentage was only 21%. 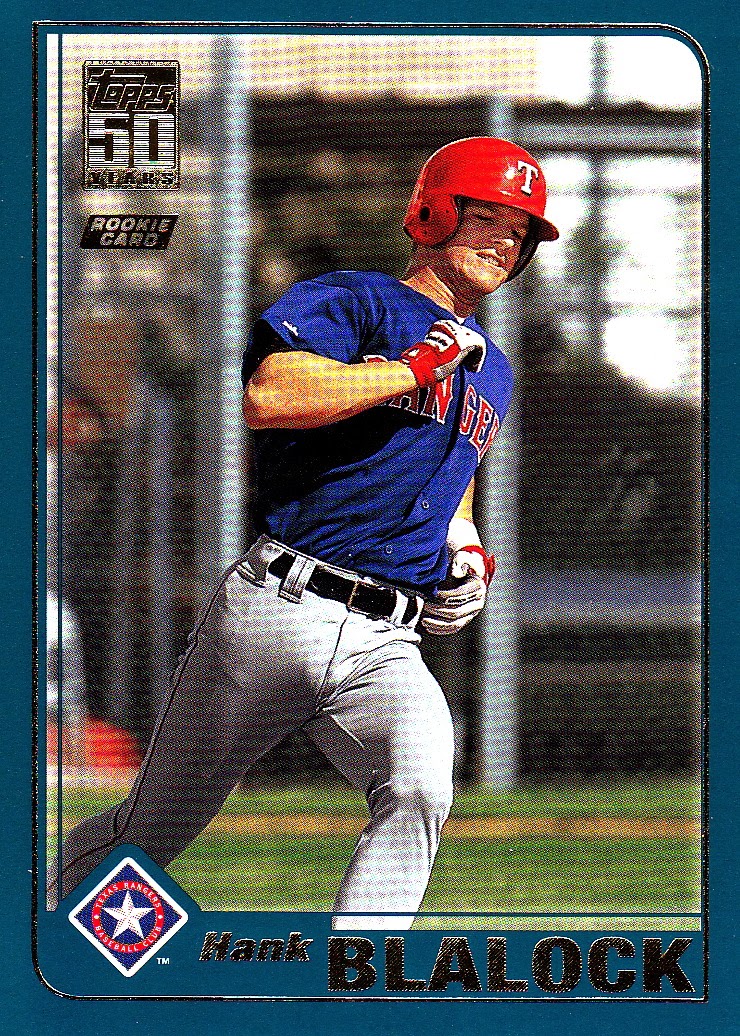 Blalock was picked right after Kessick and would have benefitted from playing his home games with the short right field porch at Camden Yards.  Texas isn't too bad of a place to play in regards to hitting however.  I find it hard to believe that Hank was out of baseball after 2009 not even yet turning the big 3-0. 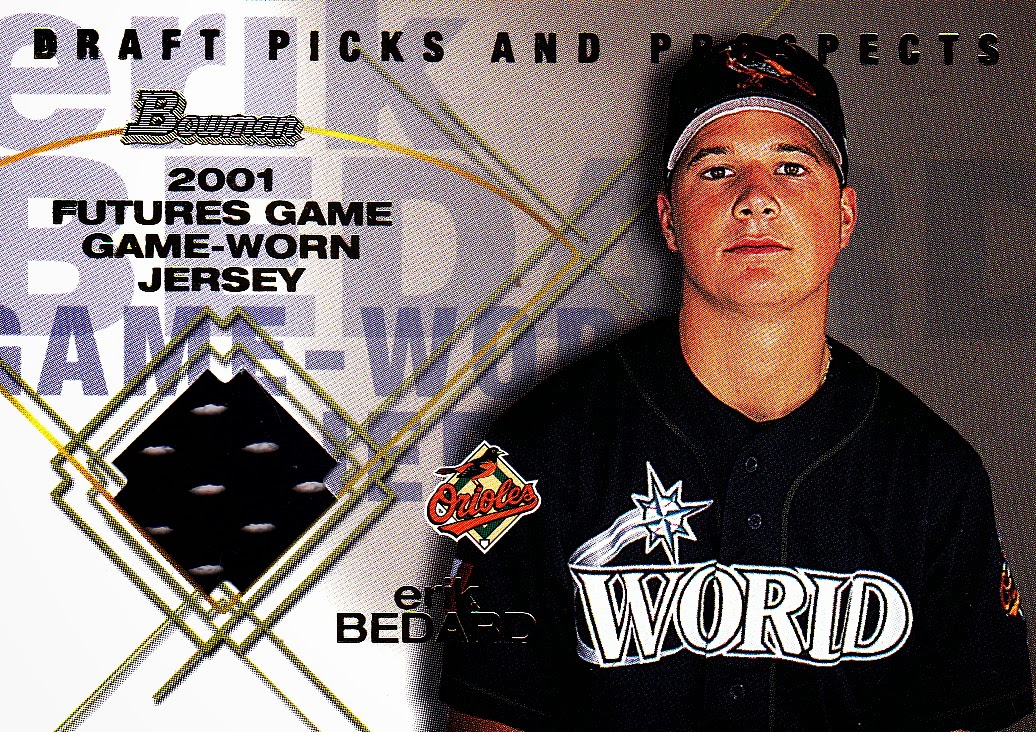 A great pick for Baltimore in a round where the talent starts to drop off in regards to how many players make the majors.  He was the ace of the staff for a few years until he was traded to Seattle before 2008.  That trade fetched the O's Adam Jones, Chris Tillman, George Sherrill and 2 others.  Bedard was good while he was here and set the O's up long term when he was traded.  It's a shame that he's battled injuries since the big trade but that's baseball I guess.

A HS pitcher that had middlin' results in his time with the Orioles organization.  I don't know much about him. 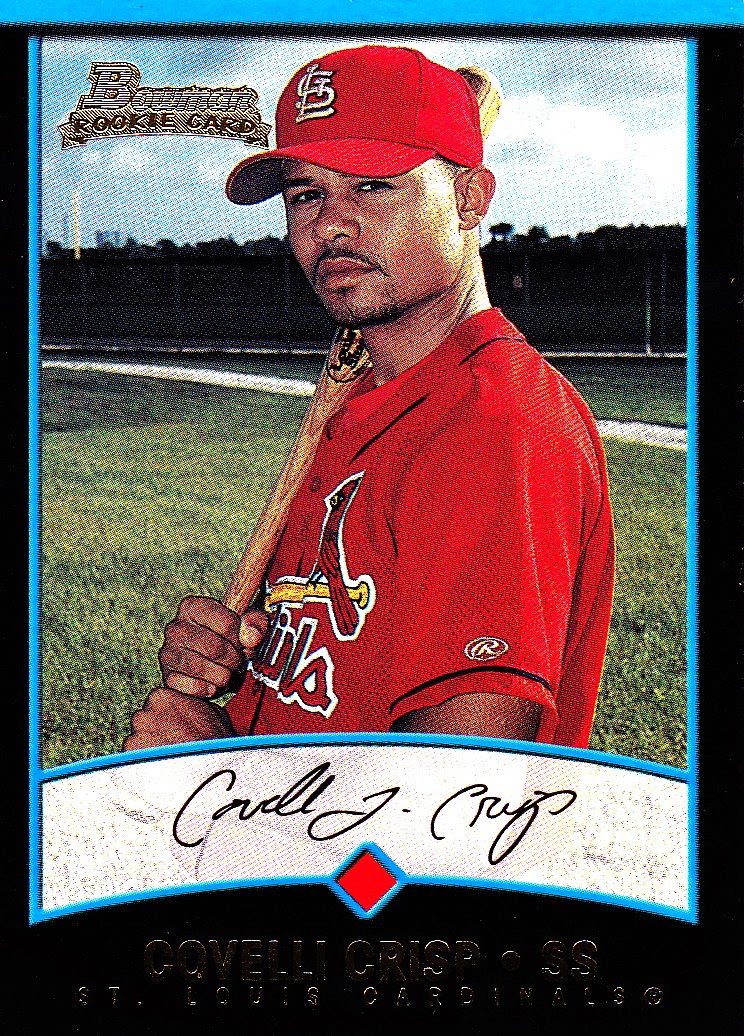 New Pick: Coco Crisp, 2B, Los Angeles Pierce College (Drafted by the Cardinals with the #222 pick)

Coco has gone onto have a pretty good career.  He might be better known for his 2014 Topps base card.  I think it's interesting that he was a 2B in college!

The next few rounds were pretty much a wash for the O's.  Nobody stands out as a much better pick.

The 13th round is where Albert Pujols was picked with the 402nd pick, 5 after the O's picked Drew Hassler at #397.  Whoops! Thirty teams had at least 12 chances to draft him and the Cardinals were the team that took a chance on him.  I think it turned out pretty well for them!

Other Orioles Draft picks that year to make the majors were: 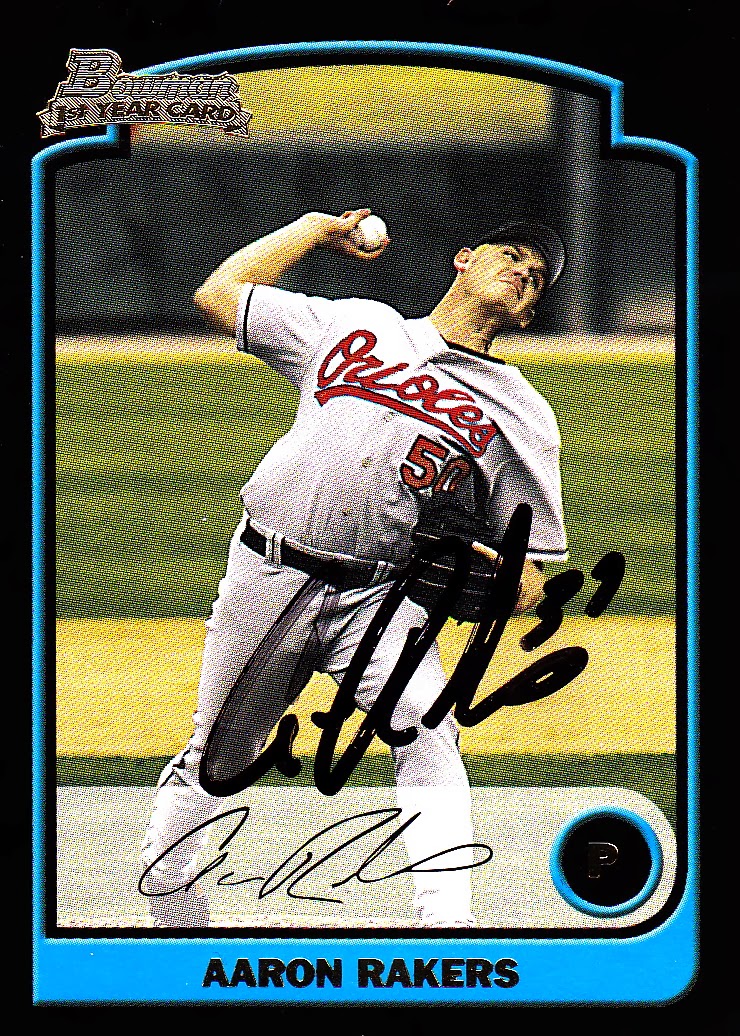 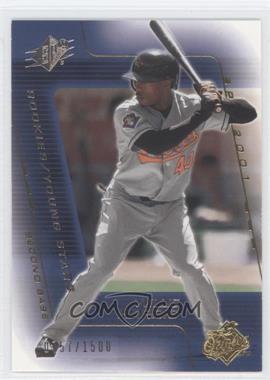 
Side Note: When I went digging through my 2003 Topps set to get the Chris Duncan and Alex Rios cards for the scans, the whole set was stuck together in one complete brick. I've heard of cards sticking together when they've sat for a while.  As you can see, both cards have "battle damage" from me pulling them apart.  I'm pretty upset that it seems like the whole set is ruined because if I pull them all apart, the paper loss will be on every single card.

Anyways, I hope you enjoyed this little look back at the 1999 MLB draft through my eyes.  I really did have fun putting this post together and I'm looking forward to doing more posts like this.  Doing the research and digging through cards to scan really invigorated me in regards to blogging.  Hopefully I can keep the flame burning!
Posted by Ryan H at 7:00 PM