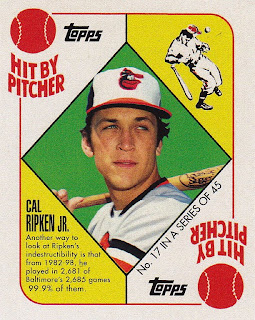 2010 Topps Blue Backs #17.
This card is a recent eBay win for me. I was the only bidder so I got the card for next to nothing. Topps did a good job reprinting these because they are true to the originals right down to the size. The only thing they could have done better would have been to print them on cardboard stock and not the modern glossy cardboard.
I now own both the Red Back and Blue Back and both are "Hit by Pitcher" cards. Cal was hit by pitches 66 times in his career. That's a lot of bumps and bruises but pales in comparison to Hughie Jennings with 287 career beanings. Craig Biggio was nailed 285 times during his career. Also, the active leader in being plunked is Jason Kendall with 254.
Posted by Ryan H at 5:42 PM