Trade with Dennis of Too Many Verlanders

A couple weeks back Dennis from the fantastically named Too Many Verlanders blog offered up some cards that he was trying to rid himself of for little or no return.  I was able to send him some cards from his wantlists and he sent me a nice pile of Bowman Chromes for my sets (which I still need plenty people, help a brother out!)  and a few Orioles cards, most of which I needed for my projects. 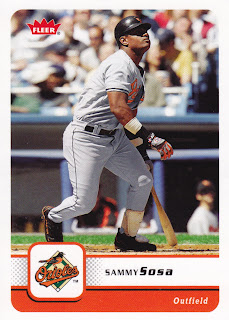 Here's Slamming Sammy in Yankee stadium probably flying out.  He sucked so bad towards the end of the season, that he packed his bags and left the team early without permission. 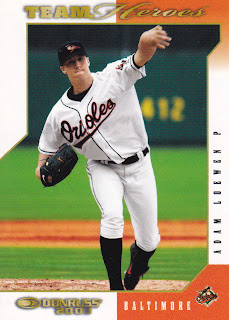 There were a bunch of Adam Loewen cards in the package that I was able to fill several holes in my team sets. I find this to be a sort of ironic card since Loewen is definitely not a "Team Hero".  He totally pooped all over the gentleman's agreement he had with the Orioles when he decided to become a hitter.  Instead of resigning a minor league deal like he was supposed to do, he instead flew home to Canada straigh into the Blue Jays nest. 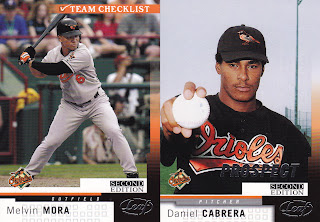 These 2 cards finish off team set for 2003 Leaf. Exciting for me, but probably not so much for you. 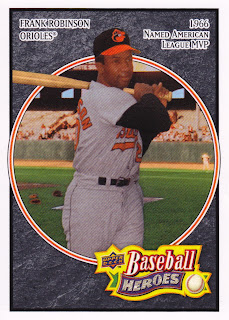 2008 Baseball Heroes was filled with colored parallels and the charcoal parallels are just one of the many.  I might actually have the team set of these charcoals as well as a few other of the colored varieties.  I'll check and get back to you, or not.  We'll see!

Thanks Dennis for the help on my Orioles Binders and on my Bowman Chrome sets.
Posted by Ryan H at 8:06 PM