I've seen everybody else posting their hauls from Nachos Grande's group break of 2 boxes of 2012 Topps Mini and 1 box of 2000 Fleer Impact, so I figured I mind as well post mine too.  These cards have been sitting on my desk for over a week now and I never put these cards away until they are scanned and posted. 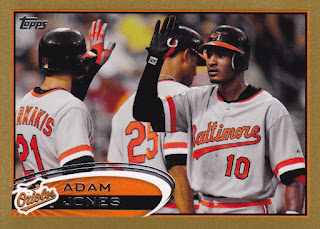 The highlight of my chosen team, the Orioles was this gold border of Adam Jones. I got a nice pile of Orioles base minis that helped fill in my team set. Jones has seemingly cooled off from his torrid first half of the season but is still in the middle of most of the O's rallies lately.  He's also been keeping the shaving cream manufacturers in business because every time the Orioles Hero du Jour does a live interview on postgame, he's the one responsible for the pie in the face sneak attacks. 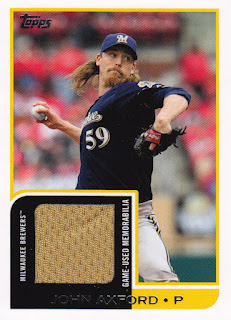 My random team was the Brewers.  I was pretty surprised that they weren't taken and I got 'em.  I was even more surprised to see that I snagged a relic card.  I love the Gold swatch!  For anybody that knows, what's the deal with the gold jerseys?  Are they only worn on certain days or occasions? 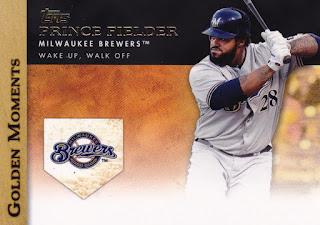 I also ended up with a Prince Fielder golden Moments insert.  I don't have that much to say about Prince other than his name is annoying, though I wouldn't say that to his face.  All of the Brewers I obtained in this group break are for trade including all of the base cards, the Fleer Impact cards, and the Axford relic.

Thanks for holding the group break Chris!