I recently completed a large scale trade with Scott Crawford.  I thought that I had a pretty large wantlist but they pale in comparison to his spreadsheet of set needs.  He's a set builder much like myself and I was happy  to be able to fill so many of his needs.  I probably sent him close to 2500 cards and I can honestly say that I had fun searching for each and every card! 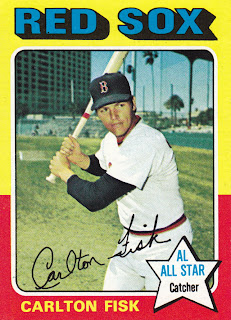 I am in the early stages of collecting the "semi-vintage" Topps sets and that was about 95% of the cards that Scott sent me in return.  What do I mean by "semi-vintage" you ask?  Semi-vintage is a term I use to describe the Topps sets from 1974 to 1980. Topps was the only licensed card manufacturer and it was the first time that the entire set was released in one series instead of 6 or 7 during the summer.  Cards from this era aren't terribly tough to track down, but they are still not as plentiful as say '87 Topps or '91 Donruss.

Scott probably sent the most of 1975 Topps cards and they are all in excellent shape.  I don't quite have enough to start a wantlist just yet but hopefully by the end of the year I'll be able to accumulate enough of them to warrant typing one up. 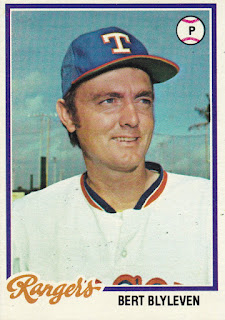 I also got a good chunk of 1978 Topps too.  Again I'm in the beginning stages of building these sets so I don't have a list yet.  I'm just trying to acquire as many as I can at this point in time. 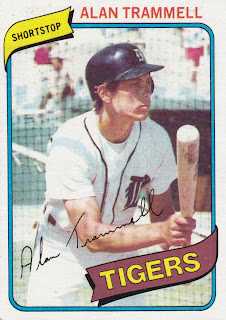 1980 is on of my favorite Topps flagship sets of all time.  I love the "ribbon" as it shows the team name on the bottom right and the player's position on the upper left.  I can't wait to complete this set so that I can see the whole thing in it's entirety! 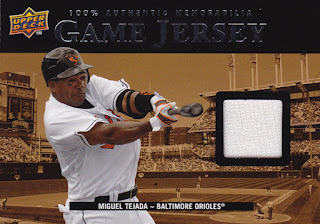 Not all the cards that Scott sent me were of the semi-vintage variety.  We also exchanged some relic cards.  He had 2 Miguel Tejada relic cards that I liked along with some trade bait cards that I think I'll be able to trade going forward.  The other Tejada is his All Star workout jersey from 2004.  That's the year he went toe to toe with Lance Berkman in Houston's Enron Field Minute Maid Park during the Home Run Derby.  I think that might be the last time I've watched the HRD because I can't stand Chris Berman and his stupid nickname and home run calls. I can't really stand ESPN anymore.  I couldn't tell you the last time I actually watched sportscenter or baseball tonight. 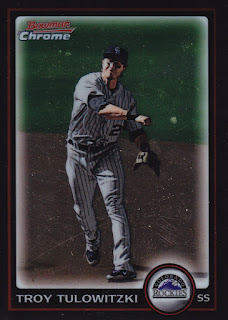 I also got this one lone card from 2010 Bowman Chrome.  Yes, I'm still working on the set and yes I still need just a few cards to finish it up.  I might have exhausted the blogosphere's supply of Chromes from that year and I might be heading to Sportlots soon just so I can put this baby to bed.

Thanks Scott for the trade.  I'm glad I could help you out on so many of your wants and ecstatic that you sent me a bunch of cards for my semi-vintage set building adventure.
Posted by Ryan H at 8:42 PM