In between running my group breaks and the tradebait blowout, I've also been scouring ebay and Listia for deals.  I've had a pretty good run of ebay wins. If my memory serves me (I'm too lazy to log in), I think all of the cards I've won on Ebay have been for less that 15 bucks shipped. 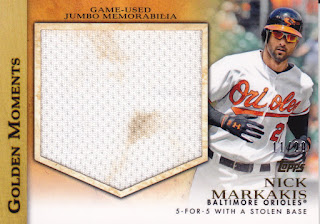 While I'm not a huge fan of the Golden Moments insert set from 2012 flagship, this  Markakis Golden Moments jumbo relic card #d 11/20 is awsome.  I love the dirt stains! 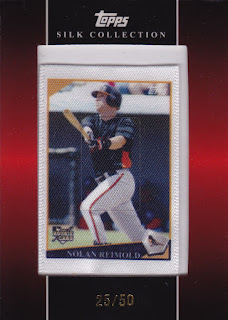 Another Ebay win this Reimold Silk #d/ 25/50 from 09 Updates and Highlights helps fill out the rainbow I have going of Moldy.  Between William of Foul Bunt and I we own 4% of the print run of this card! 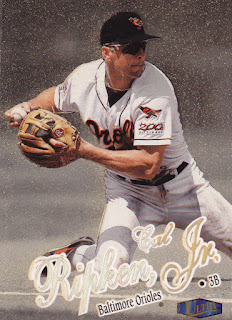 I also dabble in Listia looking for Cal Ripken cards that I don't have on the cheap.  This Fleer Ultra Gold Meadallion from 1998 was mine for less than 500 credits! 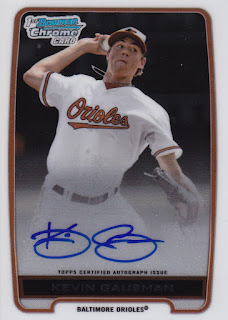 The Orioles top draft pick in this years amateur draft was Kevin Gausman from LSU.  My cousin is a big LSU football fan though I doubt he knows who the 2nd best pitcher in the O's system is. I decided to splurge a little bit on this one and paid about 20 bucks shipped for it.  I think up to the time I won this one, the lowest completed auction price totalled about 25 dollars. 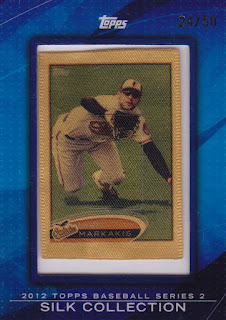 Here's my most recent Ebay triumph.  It's another silk card from this year's series 2 of Nick markakis.  The cloth is a lot darker than I've seen before and there's no card number on the back plus it's a little scratched up.  I think maybe the seller stored his cards between sheets of 220 grit sandpaper.  It doesn't really matter that much since you can't really see the scratches in a 9 pocket page.

There's always deals to be found on the various auction sites around the webernet.  You just gotta know where to look!
Posted by Ryan H at 9:19 PM