Here's part 2 of my card show wrap-up (if you couldn't tell from the title!)
5. 2010 Bowman Chrome Draft Picks Buster Posey Refractor. I think this card was mistakenly in the wrong box. It was nestled deep in the 7 for 5 dollar box so I couldn't refuse to pick this card up. It looks awesome in person and its in great condition. My Scanner refused to pick up the refractory shine this time. 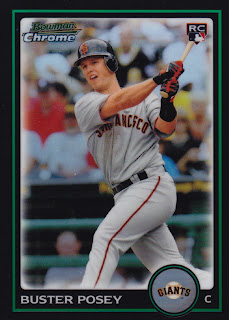 4. 2009 Upper Deck Signature Stars USA Star Prospects 18U National Team UD Game Jersey Manny Machado. What a mouthful to say! I got this card on the cheap from a guy who had a ton of Team USA cards. Most of the higher end Manny stuff was out of my price range but I did drool a little bit on the glass! 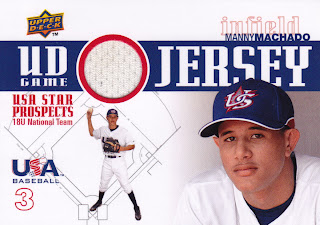 3. 2001 Pacific Private Stock Brady Anderson bat card. I've been looking for a Brady Anderson relic card for some time now and I finally got one! He doesn't have many but this one looks awesome! There is even a short bio on the back along with stats. When was the last time you saw a relic card with those on the back? 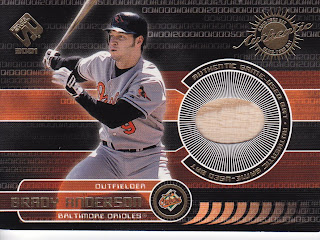 2. 2007 Upper Deck SP Legendary Cuts Legendary Materials Brooks Robinson. These last two cards I got for a combined 20 bucks a triple relic card #d to 99 of a Hall of Famer and.... you'll see. This is a great looking card. Maybe one of these days I'll feel bold enough to open a box of Legendary Cuts. 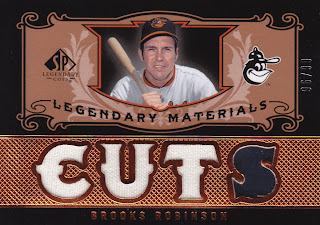 1. 2009 Topps Chrome Blue Refractor Autograph Nolan Reimold. I'm sorry if you feel a little let down by the top card on the countdown. I really have a soft spot for Nolan for some unknown reason. Maybe its because he is one of the few legit prospects the O's have in the Upper Minor leagues right now. Regardless this is my favorite card of the show. It doesn't look like it but the autograph is actually on card! 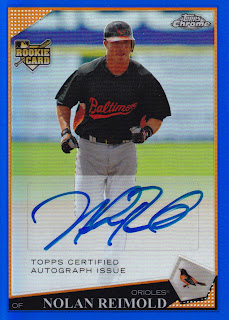 I hope everyone enjoyed seeing my favorite cards from the show!
Posted by Ryan H at 7:59 PM