Trade with Bob of '59 Topps Blog 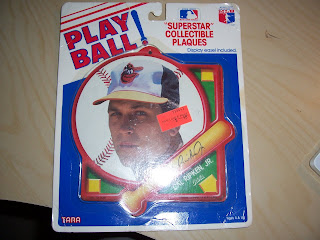 Bob of the '59 Topps blog and I just completed an awesome trade. Awesome as in I don't think I have ever recieved such a great amount of collectables in one package. He really outdid himself when he sent my package. Lets get right into the good stuff. 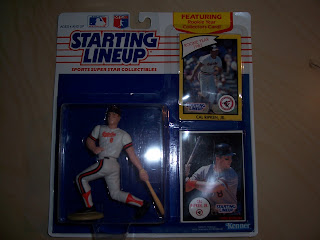 Everybody has seen Starting Lineups before. I even have some myself but they are not in their original packaging anymore. I think I have the first year Cal Ripken at my father's house somewhere but I know for sure that his glove arm is broken off! I am very proud to have this one from 1990. I am thinking about starting a collection of just Cal SLUs. We'll see!

I have never seen one of these before. Heck I didn't even know they existed and was puzzled when pulling it out the box. Obviously its a stand up plaque with the Iron Man on it but it really is a cool collectable.

Here's the extent of my Cal Ripken sticker card collection. I didn't realize the one on the right was upside down until I had already binderized the trio. So laziness prevails and they will remain this way in this post. I hadn't really paid much attention to Odd ball Cal stuff in the past, but now I know that kind of stuff just doesn't exist anymore. It just makes them so much cooler. 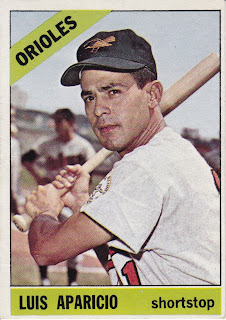 I distinctly remember seeing this card at the show I went to a few weeks ago. I wanted to buy it but ran out of cash and couldn't get it. Two days later it shows up in my mailbox! Everything happens for a reason. 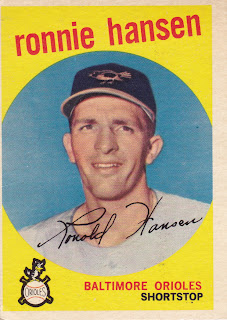 I believe this is my first Ron Hansen card. He was a good player for the Birds but had mixed success after he was traded from the Charm City. 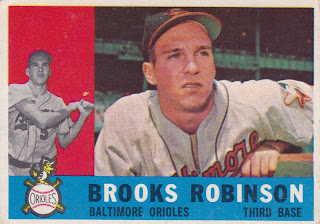 And this is probably the favorite card of the trade. Im a big fan of 1960 Topps and I might build the set one day. For now this Brooksie with have to just fill a gaping hole in my O's team set.

I want to take this opportunity to than Bob for the awesome cards and collectables that he sent. Also, go check out his blog, its very well written and you'll be able to learn alot about 1959 Topps and the players in the set.
Posted by Ryan H at 5:40 PM