I should have known better.  I saw some 2011 Bowman Platinum cards hitting eBay so I thought I'd hit Target on the way home and maybe by chance they'd have some packs and blasters.  No luck today.  Somebody really straightened up the card section and there was nothing even remotely interesting on the shelves... Piles of series 1 and series 2 though.  Even the Power Packs reduced price box was gone.  But I did something stupid though.  I bought one of those 3 packs plus a GU card 9.99 deals.  You know, for science.  Here's the resulting carnage: 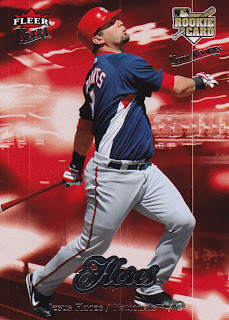 
1 pack of 2003 Upper Deck Victory.  I was initially a little happy to see this pack since it was something different.  Then I opened it and realized that it was the year they made a "card game" and was let down again: 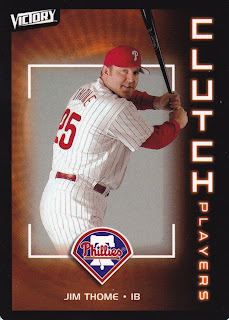 And the moment we've been waiting for, the GU card: 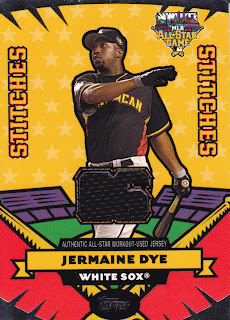 2006 Topps Update Jermaine Dye Workout Jersey Card.
It has 4 dinged corners and obviously has been well loved.  I don't love it though.


Hide your kids, Hide your wife, and Hide your husbands too.

Stay far away people, I open this crap so you don't have to.
Posted by Ryan H at 8:02 PM