For the past few weeks the trade talk had been heating up around the Orioles best pitcher, Koji Uehara.  I have been watching the talk closely hoping that he would not be traded but now he is headed to the Texas Rangers.  His stay in Baltimore was frustrating when he was on the DL, but most of the time when he was on the mound it was lights out. His presence in the O's bullpen will be sorely missed.  Poor Jim Johnson, his arm will fall off now.

I was very excited when the Orioles signed him from Japan because of my Japanese heritage.  My Grandmother on my mother's side of the family was from Japan.

Here's a few of my favorite Koji cards.  I kind of have a PC of him, meaning when I see cards of him I pick them up but don't go out of my way looking for them.  (LMK if you have any you may have for trade)  Topps seemed to recycle the living crap out of the same few photos of Koji so there aren't that many "different" cards of him: 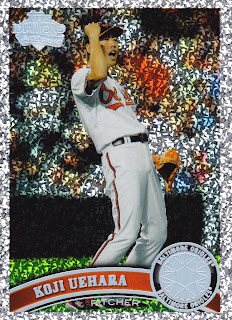 This is bar none his best regular Topps card.  The Diamond Anniversary parallel really makes the card shine! (literally and figuratively!) 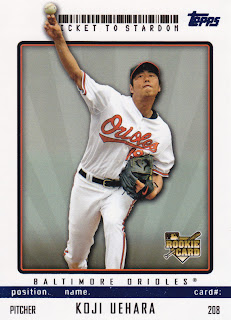 This is one of the multi-recycle images.  This particular card is #'d 49/99 (blue parallel, notice the blue foil) 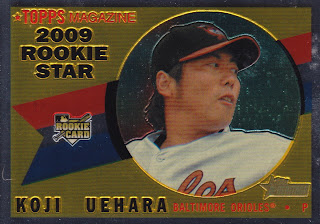 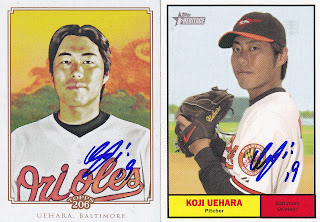 These 2 came through the mail during spring training this year.  He was an awesome TTM'er while in Baltimore. 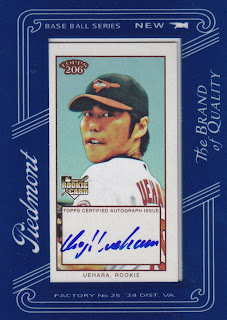 As far as I can tell, he signs his full name on all of the certified autographs and only his first name on IP and TTM's.

Rangers fans, I know you are going to enjoy watching Koji pitch.

Best of Luck to you in Texas, Koji!

思い出をありがとうございます
Posted by Ryan H at 10:06 AM