Trade with Ted of Crinkly Wrappers

Ted from Crinkly Wrappers and I just completed another trade. We've been pretty good trading partners even before he got his blog up and running. He contacted me about the Joe Morgan Legends shortprint that I pulled out of my series 2 hobby box and a new trade was born.
I already had this card but it is an upgrade of the rough conditioned one I had in my team set binder. I like the early action shot of Boog here calling for the pop up. I like these mid 70s action shots because you just don't see action shots like this nowadays. 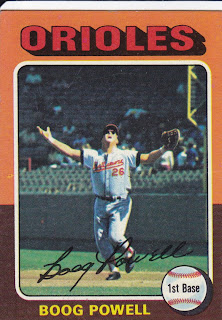 Speaking of Team sets, Ted also sent me a full team set of 2005 Upper Deck Past Time Pennants. All 4 of these cards has great shots of the greats from the Orioles past. This was an interesting set that you could even get a real felt pennant out of your hobby box. Apparently the gimmick wasn't enough of a pull to warrant Upper Deck making a followup set in 2006. 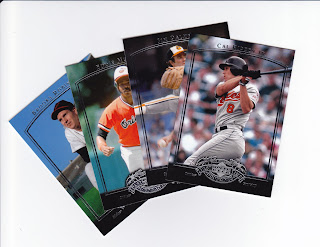 Ted also offered up a near team set of this year's Pro Debut. I seem to dabble in prospecting so Pro Debut is right up my alley. I am a little confused as to why Topps is only putting out one series this year. I really like this shot of Manny Machado. It looks like it was taken a nanosecond before the picture on his '10 Bowman Draft Picks Prospect card. 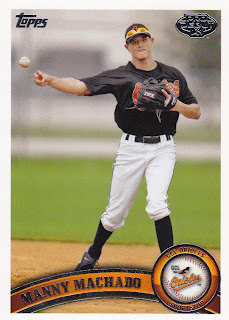 Thanks to Ted for sending these nice cards my way. Good luck on your Vintage Legends personal Collection. I can't wait to see the finished results!
Posted by Ryan H at 5:32 PM