I think this is my last purchase of series 1 for this year.  I've nearly got the whole set and I only ended up with one card I needed for the set out of the 72 in the hanger box.  I've got 10 of the Golden Giveaway Code cards that I'm going to stash away for now.  Well, at least until series 2 comes out and the Markakis gold 1/1 becomes available for redemption.  It's a complete longshot to redeem that one card but you gotta increase your chances any way you can!
I know I've spent less on series 1 this year than I did the last 2 years.  I've bought 1 hobby box, 2 hanger packs, 1 jumbo rack pack, and 3 retail packs.  So overall I've spent about 85 or 90 bucks on series 1.  Not too bad I don't guess.
Overall, I've noticed many of the bloggers have spent less on Series 1 this year and have said so in their respective posts.  If you have spent less this year than years past, leave a comment below stating why you have chosen to spend less.  Is it the design, too many inserts, too little cash or another factor?

So onto the cards I got from my last hanger: 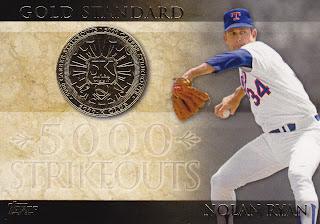 I think the Gold Standard cards are the best inserts from series one because of the gold stamped medallion.  I'll admit they aren't perfect because of the blank space under the medallion but I'm willing to forgive that fact. 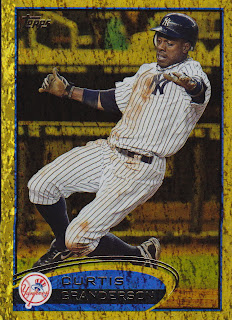 I can't seem to get away from Yankees cards lately.  I think the Gold Parallels have grown on me a little bit as I like them more now than I did when the product first dropped so long ago. 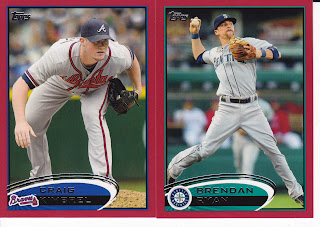 Here's my 2 Target exclusive red borders. I wish they were a little more red though.  They look more maroon to me. 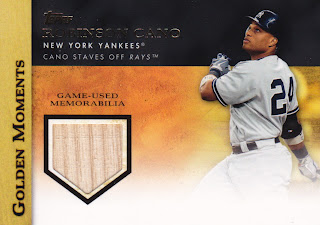 I was pleasantly surprised to pull a relic from a hanger pack because they are a 1:18 packs pull.  See what I mean about the Yankees cards though?  This is my second Cano relic from the same Target in less than a year (I got a mini framed GQ relic last spring).  Does Robinson's mother shop at my Target?

All of these cards are for trade.  If you see something you can't live without, gimme a shout.
Posted by Ryan H at 4:19 PM