Trade with Derek of Tomahawk Chopping

I recieved a nice little package in the mail the other day from Derek over at Tomahawk Chopping.  Derek and I have traded several times, and this one is just as good as any.  He always seems to come up with some great stuff for me. 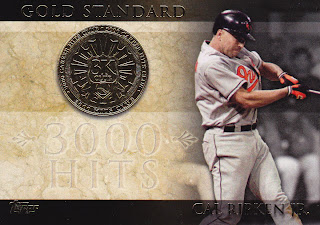 Here's my favorite insert card from 2012 series 1.  I think Topps nailed it with the gold stamped medallion.  I've seen this picture of Cal before and I'm 99% sure that it's actually his 3000th hit swing. 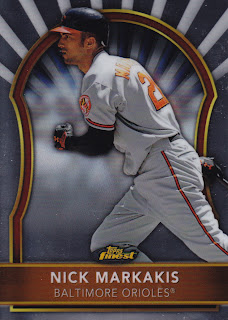 I have a love it/hate it relationship with Topps Finest.  I've never opened a pack of Finest but I generally think the cards look great.  It's hard for me to justify collecting the Orioles team sets though because they are usually only 2 or 3 cards.  It's not a Finest Problem, it's an OCD Ryan problem.  Instead of going for team sets, I'm just going to pick up cards of my player collections and be done with it. 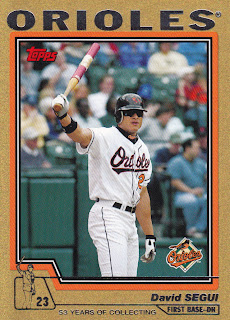 I'm finding out in my search for earlier Topps Gold cards that they are tough to find.  I've nearly completed O's team sets from 09, 08 and 07.  Golds from 2003, and 2004 are tougher to find for some reason.  I understand the scarcity of 2001 since that was the first year that Topps resurrected them from the dead and were serial numbered. 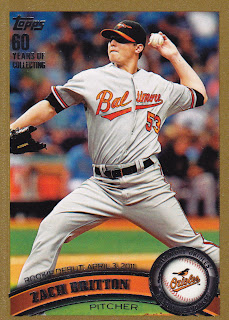 The Golds from the last couple of years have been much easier to come by.  I've essentially completed 2010 except for Corey Patterson, Mike Gonzalez, and Jake Arrieta from the Update set.  Apparently, these 3 along with some other players were shortprinted by an extreme amount.  I'm talking less than 50 and maybe as low as 25 are known to exist.  This 2011 "Rookie Debut" of Zach Britton is one of the last few I need  other than Adams, Guerrero, Hardy, and gregg from the Update series.

Thanks again Derek for the trade.  I look forward to our next one.
Posted by Ryan H at 1:48 PM