On some of my recent Lowe's runs, I've slipped into Target (which is in the same shopping center, conveniently!) to pick up a few packs to rip.  I have gotten some funny looks from Target associates since I've been walking into their store looking like a bum.   Imagine some (almost) 30 year old dude walking in to the card section with muddy Red Wings, dirt crusted work pants and a grimy, sweaty t-shirt.  I think I've either scared the kids away with either my unkempt appearance or the stench of sunblock and sweat!  More cards for me! 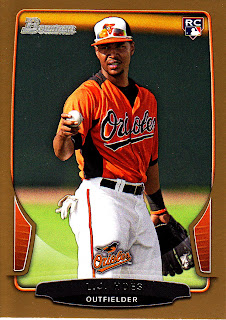 So I've decided to go ahead and collect Bowman this year after much debate.  I've picked up a few (3) blasters and several of the value packs.  I had past success with the blasters which you can read about in my archives but the only real card of interest that I've gotten recently is this Gold LJ Hoes.  Hehe, Gold Hoes....  Still, out of all of the Bowman I've busted, I've yet to get any other Oriole card besides this one, a regular and chrome version of Jonathan Schoop.  No Crush Davis, No Adam Jones, No Bundy, No Manny...  Luckily I've gotten a few in trades.

Here's my updated list of 2013 Bowman I have for trade:

My 2013 Topps Series 2 breaks have been pretty good.  I've gotten some decently rare cards out of the 2 hanger boxes and the 2 jumbo packs I've broken.  I've had some crap collation in the Hanger boxes though. Except for the inserts, both boxes had almost the same base cards in them.  Out of the 65 so base cards, there were only about 6 different cards between them.  The Rack packs haven't been as bad but out of the 222 total cards out of the breaks, I've only got 93 towards the entire series 2 set.  I guess these cards make up for it (but not really). 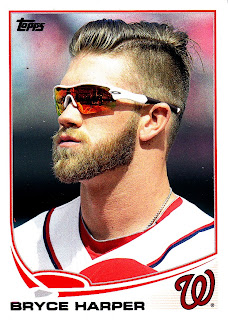 I got the Bryce Harper sunglasses SP out of the first hanger box.  While I don't really care for his Nattitude, I do respect the way that he plays the game hard.  I guess that's why I decided to start a mini PC of him.  Don't send me a ton of his cards though, I'll just add to the binder when I pull his cards from packs. 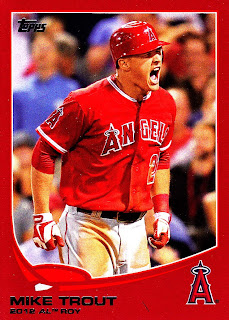 Also, from hanger box #1 I got this red screaming Trout.  The red Target borders really look good with the Angels uniforms.  Shouldn't the 2012 awards be in series 1 instead of series 2?  Either way, this card is headed to my Trout PC Binder. 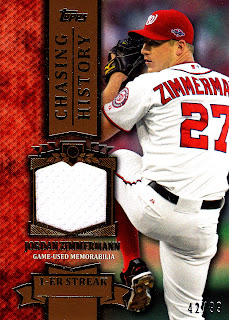 From hanger box #2 I got some more Nats-jo.  Jordan Zimmerman seems to follow me around since I pulled his mini auto from my box of Allen & Ginter last summer.  Now I get this Chasing History relic card #'d 42 out of 99. 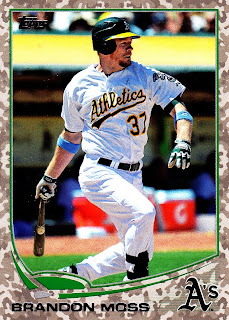 I think this one came out of the first rack pack I opened.  This is the first digital Camo parallel that I've seen in person and I have to admit, the look pretty sharp.  More than I can say for those pink border abominations.  I think the pick just reminds me to much of the Justin Beaver and Moonlight vampire sissy cards that lurk next to the sports cards at Target.  Beaver will eventually kill himself in high speed car wreck and I've soaked up enough sunshine this year that I probably would kill any vampires that would come into my presence.

Here's a list of my available trade bait that I have: