Contest Winnings from Judson of My Cardboard Habit

I've done a lot of emailing and chatting with Judson from My Cardboard Habit recently.  He recently finished up his Gypsy Queen set for 2013 and he decided to celebrate by giving away a bunch of the hits he acquired while doing so.  I was a late entry to the contest but I also made a post on my blog about it and ended up scoring a bunch of extra entries.  I appreciate everybody saying that they heard about the contest through my blog.  Hopefully each of you followed Judson's blog since he does have a knack for writing interesting posts.

So on to my prize package.  I was not expecting the huge bounty he sent me.  I knew I'd get some hits but definitely not 7!

First up are the autographs.  I think my favorite is the Wally Joyner.  There aren't many cards being produced these days. 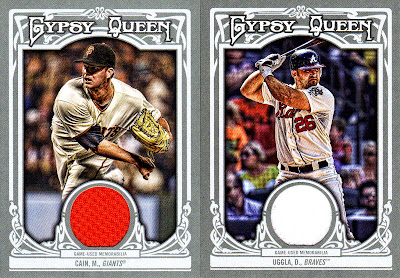 I got 2 full sized relic cards too.  I really dig the orange swatch on the Matt Cain card and the white swatch on the Uggla makes it look like theres a hole in the card. 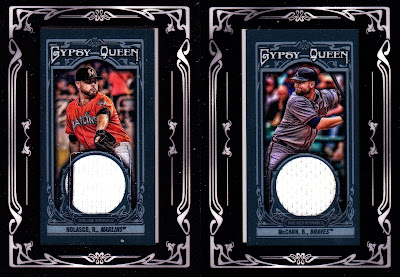 I like mini relics but I've never understood why Topps couldn't make the card inside as big as the frame.  I just don't like them sliding around.  I just noticed how I scanned these cards.  It actually looks like Nolasco is pitching to Brian McCann!

Since I pimped his contest, I also wanted to pimp his Group Break he's got going on.  He's breaking some 2013 Allen & Ginter.  Hurry on over and claim your spot!

Thanks for the awesome prize pack Judson!
Posted by Ryan H at 8:00 PM