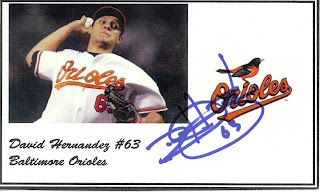 Somebody get this man some runs. I thought this would be a good opportunity to showcase another of my TTM sucesses from last year. I sent this custom postcard not long after he won his debut last season. He autographed it and sent it back in about a week! I really think that he has the stuff to be a really good player but I think he tries to nibble at the corners of the plate. His fastball has enough giddyup to blow right by hitters yet he tries to work the corners a little to much and gets in trouble with his off-speed and breaking pitches. I may be regurgitating the same thing Jim Palmer said last night but it is true. If batters can't catch up to your fastball, don't try to fool them with your breaking ball. I don't know how much longer David will get to stay in the Baltimore rotation because Chris Tillman and Jake Arrieta are tearing up Triple-A hitters lately. I think David has pitched pretty well for 3 or 4 innings and then the wheels start to come off. I think that he will ultimately end up as a late inning bullpen guy where he can blow hitters away with that mid 90's heater. But in the mean time, how about the Orioles score some runs for this man?
Posted by Ryan H at 8:09 AM