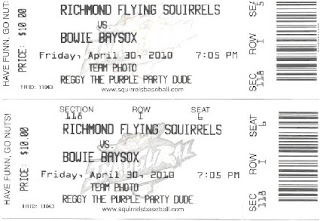 Friday night my girlfriend and I decided to take in a minor league baseball game at the Diamond in Richmond. It is only about 15 minutes from my house. There was no baseball in Richmond last year because the much loved AAA Richmond Braves left town after the 2008 season. So this year we get the AA Richmond Flying Squirrels. First I think the name is completely stupid. I have never seen a flying squirrel in richmond or the surrounding area. Second, I think the logo and the mascot looks like a skunk not a squirrel. Third, they play at the Diamond which is basically falling down around the team. About 5 years ago they had to stop the game because a chunk of concrete fell out of the rafters and smashed a couple of seats into oblivion. Just imagine if it would have hit somebody. This is partly the reason I buy seats in the lower deck (and because you get a better view of the game.
The only reason I felt compelled to go to this game is because the Bowie Baysox (AA affiliate of the Orioles) were in town. We arrived a little late to get any autographs but some of the Baysox players did sign for some people. I didn't bring any signing material anyways. The starting pitcher for Bowie was Steve Johnson. He pitched rather well but got no help from his offense. Bowie ended up with 3 hits on the night. Johnson got the tough luck loss and the only hit top O's prospect Brandon Waring got was a beer vendor. Yep, nailed the poor guy right in the nose. The squirrels staff were scrubbing up blood for the next half inning.
Overall it was a good outing on a Friday night. Maybe when the Baysox are back in town I'll go again and try for some autographs.