Since I haven't opened a lot of packs of cards lately, I decided to stop at Target on the way home and see if they had some new Bowman Platinum.  I decided on 2 of the value packs.  3 regular packs and a value pack exclusive 3 purple prospect cards.

From what I've seen from my small sample size break, I like what I see so far.  Last year's product wasn't terrible but this year's is really nice looking. All of the base cards are refractors so thats something I haven't seen before.

Heres some of the highlights of the break: 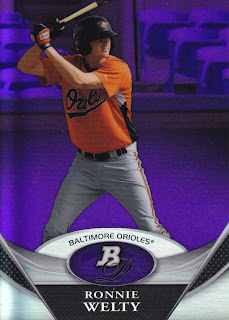 I got one gold parallel: Aroldis Chapman 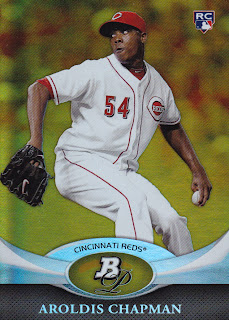 and I was lucky enough to pull an autograph card:

Hayden Simpson.  According to Baseball Reference, he hasn't had a great first pro season but he still has plenty of time to turn it around. 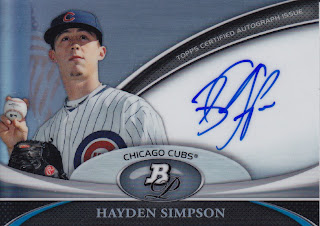 I guess I did pretty well for just a few packs.  I'll probably pick up another pack or two in the near future and see if I can get lucky again.
Posted by Ryan H at 7:09 PM