I feel like I've been a pretty lame-ass blogger lately because of my lack of posting.  With Spring training in full swing, new cards being released, and the weather warming up outside, you would think I'd be bursting with great ideas for posts.  First off, my spring training TTMs are trickling in a little slower than I expected.  I sent to some safe bets and have seen returns that were even sent after mine. Maybe mine just got shuffled to the bottom of the stack. Secondly, there are new cards being released but neither of the 3 sets that have come out (Opening Day, Tribute, and Heritage) really grab my attention the way series 1 did.  I'm choosing to spend my card budget differently this year (read: more responsibly!), due to being a newlywed, searching for a new house, and just not wanting piles and piles of cards creating clutter on my desk.

Anyways, I'm always up for trading and one of my anonymous blog readers and fellow O's fan Zach recently swapped some cards. He is just getting back into the hobby after a long layoff so I happily was able to reduce card clutter and send him a gaggle of Orioles cards that he was interested in.  He sent me a bunch of the blue Wal-Mart parallels from series 1.  kevin gregg was also included in this lot. Zach sent 2 blue parallels and a gold parallel along with the ones below. He was left out of the scan because he sucks at his job and whines about it to the media. He blew a ton of saves last season and doesn't understand why Showalter is going with Jim Johnson as the closer this season. Get a clue! Any mention of gregg on this blog will be in lower case until he learns how to do his job better. 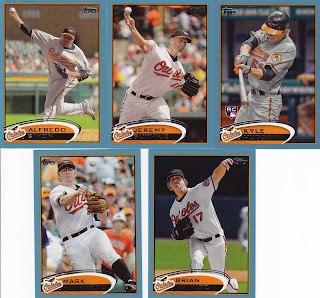 Sorry to get on my soapbox about the Orioles entitled ex-closer but I had to get it off my chest.  I feel much better now.

Thanks Zach for the trade.  I hope we can do it again sometime!
Posted by Ryan H at 7:40 PM