Wow, it's been a week since my last post.  I've been playing a lot of Xbox lately since Mass Effect 3 came out.  That doesn't mean I've been completely ignoring my card collection though.  Things have been slow this early spring since series 1 came out. There have been 4 new products come out since then (Opening Day, Heritage, Stickers, and Tribute), and I haven't even bought a pack of either one.  Neither of these sets has really inspired me to go out and buy any.  I'm interested in the Orioles from the sets but that's about it.  I haven't bought any packs since the beginning of February.  That's probably a new record since I returned to the hobby (for the 4th time) in late 2009.  Another reason things have been slow around here is because my Spring Training TTM's have just been a big disappointment.  I sent to some longshots but also to a bunch of safer bets.  I've only gotten 2 back this spring.  I might be seriously reconsidering if Spring Training TTMing is worth the time and effort next year.  I'm still holding out hope that a couple more will come back with the exhibition schedule wrapping up next week..

Luckily for me though, to break me out of my cardboard doldrums David from "e rayhahn, rayhahn" contacted me about a week ago about some Twins relics I had on my trade list.  Of course, I was happy to trade with David again since the first one was awesome.  Here's what he sent me in return: 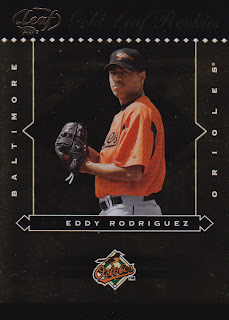 My scanner hates this card but it really looks pretty cool in person.  I was wondering what had happened to Mr. Rodriguez until Kevin from Orioles Card "O" the Day made a post just yesterday about him.  Not all players who make the majors particularly belong there. 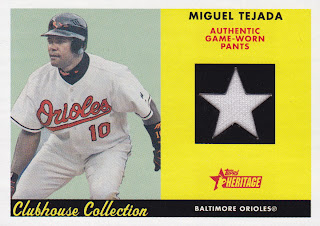 This is a nice relic card from 2007 Topps Heritage.   All of the Clubhouse Collection cards I've seen from Topps Heritage releases look pretty classy with a nice vintage touch.
On a side note Mr. Tejada reportedly still wants to play ball this year but only with a contending team.  At this point in his career, and as bad as he played for the Giants last year, beggars can't be choosers. 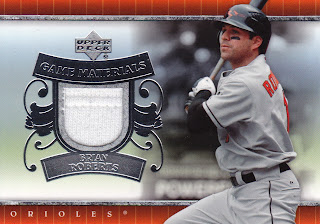 Here's a nice jersey card of Brian Roberts from 2007 Upper Deck.  This relic design is probably my favorite of Upper Deck's flagship sets.  This one goes great with my Melvin Mora and Erik Bedard cards from the same set.  It looks like I got a bit of a seam on this swatch too so that's a bonus! 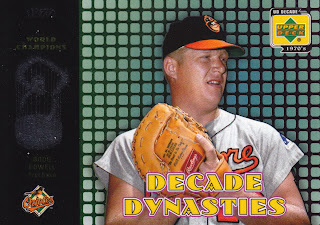 I'll close with this awesome Boog Powell card.  I don't have too many of his cards (heck, there aren't that many anyways) but this is one of my favorites.  The 70's were a great time for the Orioles franchise.  One of these days we'll have a team that can play to a .500 record or better.

Thanks David for the awesome cards!
Posted by Ryan H at 5:46 PM