I bought this hobby box of Bowman Chrome on sale at Dave and Adam's during their Black Friday preview sale about 2 weeks ago and I just got done opening and sorting out what I got from it.  My tradebait posts from last week has been taking up a lot of my card time but that's ok!  I'm glad to be able to send the tradebait I offered to people that will appreciate them more than I do for cards that I want or need.  There's still a bunch of cards left so take a look over them if you might be interested in making a trade.

So onward to the BowChro box I got: 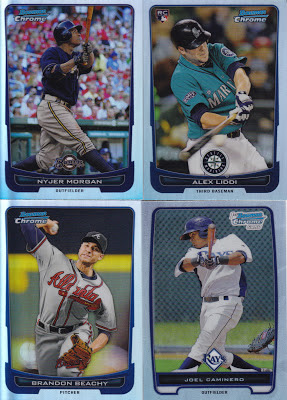 This year's Bowman design looks great all chromed up.  I got a nice assortment of refractors as you can  see.  Not much to write home about. 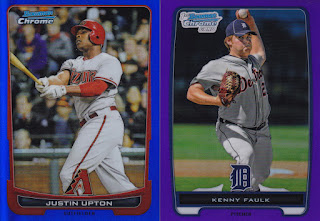 Here's my colored refractors.  Not much to see here but I think Spankee or dkwilson might be interested in the Upton blue though.  (I don't know why it looks purple in the scan). 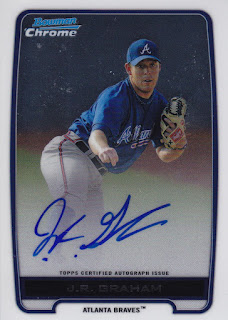 Here's my autograph card from the box of JR Graham.  I'd never heard of him before this card but at least I know he touched it.  I'm a fan of the Bowman Chrome autographs because they are on-card so I'm nearly 100% sure they are authentic.

I also got a few inserts in the box.  I'm a fan of the Futures Game inserts even though I hadn't heard of either of these guys.  I think their generic sounding Latino names might be the culprit though.  It's not a knock on the guys themselves, it's just that the names aren't really that memorable since they are somewhat generic.  I'm not as big a fan of the Franchise Favorites inserts.  It's not because of the Yankees card I pulled either.  Robinson Cano continues to follow me around in every box I open though!  The insert set just reminds me too much of Legendary Lineage and Timeless Talents.  I wasn't a fan of those either! 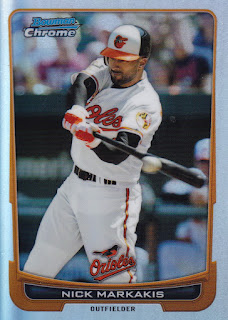 Here's the one card that makes me call this box a success.  I know it's just a dinky Nick Markakis refractor card.  Just thinking about all 330 cards being paralleled though, it's a tougher pull than you might think to pull your favorite team or even your favorite active player.

I got a bunch of cards for my set that I'm building but it's hard for me to say I wasn't a bit disappointed. My inserts and refractors were somewhat crappy and the autographed prospect card was an unknown to me.  Maybe Graham becomes a superstar one day and I become a thousandaire from the card!  Everything pictured is for trade except for the Markakis!
Posted by Ryan H at 7:45 PM