Here comes yet another tradebait clearance trade that I finished up with Jordan of Triple Play Autos.  I'm not even sure I've posted half of my trades stemming from my clearance posts, but I'm going to give everybody their due credit for trading with me.  Onto the cards that Jordan sent: 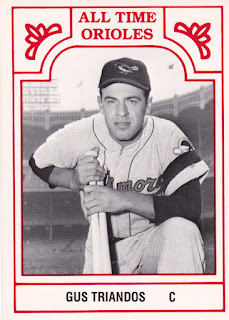 You don't see many cards of Gus Triandos and this TCMA from 1986 is the only modern card that I own of him. I've started a PC of Triandos though he doesn't get much cardboard love these days.  Most of the cards I have of him (Read:  all but one) are from his playing days in the '50s and '60's. 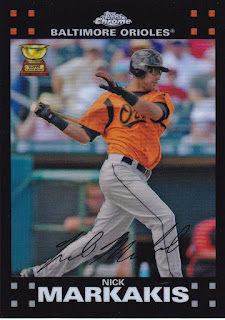 Here's a Nick Markakis Refractor from 2007 Topps Chrome that I wasn't expecting in the package.  regardless I'm happy to have it. 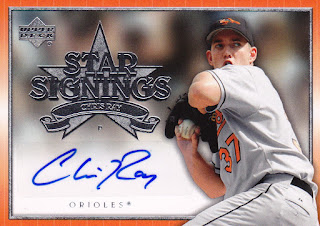 Here's the centerpiece of the trade.  A Chris Ray Autograph from 2007 Upper Deck.  I had gotten his autograph TTM back in spring training 2010 so now I have a certified copy.  I always liked Chris when he was with the Orioles and followed him even after he left the team.

An interesting fact about Chris is that he makes him home in nearby Ashland, Virginia.  He went to college in Williamsburg, VA. at William and Mary and then was drafted by the Orioles.  Chris and his brother Phil just recently opened a brewery called Center of the Universe Brewery in Ashland.  It's right off of Interstate I-95 if any of you guys or gals are traveling through Central VA.  Here's a link to their site right here: Center of the Universe Brewery. 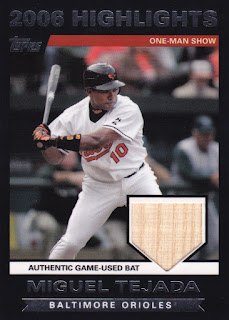 I'll close out the trade post with a Miguel Tejada relic card from 2007 Topps.  I wonder if Miggy is finally done in affiliated baseball after being released by the Orioles Triple-A team this past season?

Thanks Jordan for the trade!
Posted by Ryan H at 7:09 PM