I just finished off a massive trade with a reader of mine named Steve.  He's traded with several of us bloggers in the past and each and every one seems to be pretty epic!  Steve actually hit me up on SCF (SportsCardForum.com) that he could help with a lot of my Allen and Ginter set needs in exchange for a bunch of my trade bait.  I was more than happy to oblige since I really wanted to put a dent in my Ginter sets as well as rid myself of some of my trade bait (that's what its there for, to trade!).  I'm not going to bore you all with pictures of regular old Allen & Ginter base cards but I will show off another part of the trade that Steve was good enough to send me.  He sent me a stack of Orioles cards that knocked out over 100 wantlist items!  I understand that my wantlists are getting way smaller and tougher to find cards for but he really dug deep to find some cards I could really use. 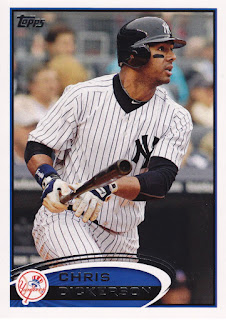 Before we get into the Orioles cards I wanted to show the capstone card for my Topps Series 2 set: #475 Chris Dickerson.  I don't show Yankees cards on the blog very often but I'll make an exception just for the occasion. 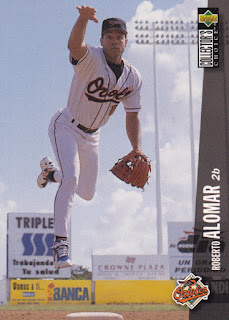 I'm not sure where this picture was snapped for this 1996 Collectors Choice Roberto Alomar card.  It doesn't look like Fort Lauderdale stadium and the Spanish ads in the background make it even more confusing.  It is a cool shot that you don't see that often, so that's what I think makes it so unique. 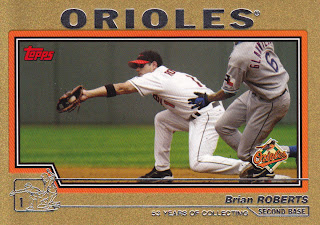 If I had to pick a favorite base Topps Brian Roberts card it would have to be from 2004 Topps.  I like the action of  Brian stretching for the ball and the sliding player bearing down in him.  I guess the best part of this card is that it's the Gold Bordered parallel from one of my lists! 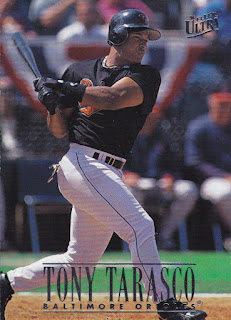 Every time I see a Tony Tarasco card whether he's in an Orioles uniform or not, I immediately think of that little brat kid Jeffrey Maier.  I don't know who's more to blame, him or Armando Benitez!  Yeah, Maier shouldn't have interfered with the play but if Benitez wouldn't melt down everytime he was in a ballgame, Jeter wouldn't have hit the ball in the first place.

A Big Thank You again Steve for the help on my sets and for the nice pile of Orioles cards you sent.  Each and every card is much appreciated!
Posted by Ryan H at 7:28 PM