Alrighty, jumping back into the pool with something easy to post about.  This is becoming a pretty regular feature here on the blog.  Recent auction wins!  I'm a bit of a bargain hunter when it comes to ebay auctions but I also don't usually buy super popular cards either.  I also have the good fortune of working at a place where I have internet access all day so bidding on an auction at 10am on a Tuesday morning isn't really a problem.  I can peruse ebay all day long but can not read my personal email (stupid firewalls).  Looks like I'm rambling again.  Here's the cards: 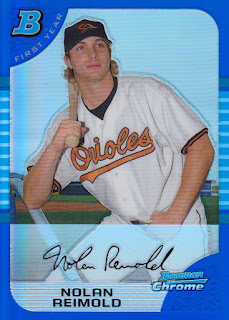 Here's my first Nolan Reimold card that I won.  It's a Blue Refractor '05 Bowman Chrome Draft picks numbered 140/150.  Man I hope this guy stays healthy this year.  I know he could hit 25 to 30 homers if he did.  He'd be able to replace Mark Reynolds' power and strike out a lot less. 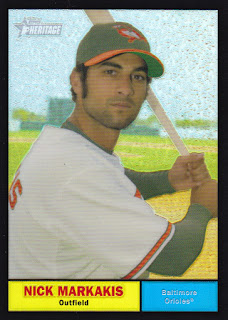 This black beauty is from 2010 Topps Heritage.  The Black Refractors are pretty awesome I think.  I really hope Nick stays healthy this year too.  Injuries haven't really been a concern for Nick the Stick during his career so I think last year was a fluke.  Let's just keep Captain Cheesburger's fastballs away from the wrists. BTW, this one is lucky-numbered 7/61. 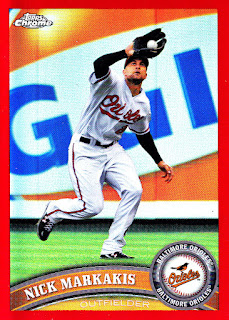 The next Nick that won was this 2011 Topps Chrome Red Refractor numbered 2/25.  I own about eleventy billion different versions of this card through flagship, Chrome, and Opening Day.  I think the only version I'm missing is the rack pack exclusive un-numbered Orange Refractor.  How does that happen? 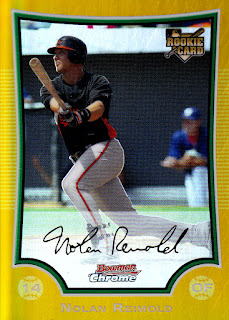 The final card that I'm showing off today is a 2009 Bowman Chrome Gold Refractor of Nolan #d 42/50.  Not a whole lot left to say about Nolan in this post.  Just stay healthy. *fingers crossed*

Here's my winnings from Listia over the last few weeks:


Oh right, I didn't win anything because I refuse to pay 1000 credits (approx $10-12) for a stack of late 80's commons.  The credits required to win a couple of Cal Ripken cards got way out of hand in my opinion so I refused to bid.  There seems to be more and more sellers starting to charge for shipping too.  No way am I handing over 2000 credits and 2 dollars shipping for a relatively plentiful mid-90's insert of Cal, no sir!  My patience with Listia is running thin, so when I finally spend the rest of my credits I'm closing my account.

See, I told you that I can put pictures on a post!  Hope you enjoyed the cards as much as I do.  Thanks for reading!
Posted by Ryan H at 5:43 PM 4 comments:

State of the Blog and a Return to Semi-Regular Posting

It's amazing how time flies.  I took a look at my blog today and realized it's been over a month since I wrote anything meaningful.  Well, at least something that pertained to my collection.
I ran into a plethora of computer issues including (but not limited to) a full hard drive meltdown, a battery failure (its a laptop) and hardware and software updates.  I finally got that back up and running with all of my music ripped and backed up on 7 CD-R data discs.  Sometimes there's just not enough hours in the day to get everything done!
I've also been hard at work outside in the yard cutting down trees in preparation for my sister-in-law's boyfriend to bring over his backhoe to rip the stumps out of the ground.  I'm nearing the homestretch and I haven't cut my leg off with the chainsaw or damaged anything with falling trees!  There's about 50 trees left (nothing too big but big enough to need a backhoe to pull the stumps out of the ground) that need to hit the ground before I can call this project done.  Then the next project will be finding somebody to come and haul away the firewood.  Anybody know somebody in Richmond that needs some?
So what does all of this have to do with baseball cards?  Not much, unfortunately!  Just because I've been busier than a one-legged man in a butt kicking contest doesn't mean that my collection has suffered.  Only my blog has been neglected!
Since Christmas break I've reorganized just about every aspect of my collection.
I've given about 10,000 cards I don't need to kids I know.  A bunch of doubles that I had no use for and I'm sure the youngins would like them.
I sent a bunch of stuff to COMC.  Hopefully the processing doesn't take too long.  I'll let everybody know when they go up for sale.
I also backed off of my complete set complete sell out.  I've decided to keep all of my regular Topps sets  from 1981 thru the present.  I will be selling off all of my Bowman ('89-present) and Upper Deck ('89-'09) complete sets as well as some of the other random sets I have around ('09 Topps 206 regular and mini, '07-'09 Goudey).  I'm still on the fence about whether or not to get rid of my Allen and Ginter near sets, and the UD Masterpieces though.  The are all great sets but I just don't look at them once I complete them.  I guess it's just the thrill of the chase but once I get them all, the thrill is gone.
I have decided to collect just the regular Topps sets from here on out.  I'm working on 2013 right now.  I didn't buy a hobby box and decided to try and build it just from retail purchases.  It's going to cost me more in the long run, so experiment failed.  I'm not going to write up a pack break or review because I'm sure everyone is sick of seeing series 1 by now.  Just check out my trade list to see what I pulled and have available to trade.
I haven't totally given up on building the 1974 thru 1980 Topps sets even though I've traded some of those cards over the last month.  They just aren't a priority right now.
I've revamped all of my trade lists to include the inserts that I have from 2011 and 2012 I've also added a section for the hits and notable cards for each team that are for trade.  I figured it would be easier to find cards from your favorite team than just looking at a long list.
I even took a little time to change the design of the blog too!  I think it look a little more dignified, even though I did like the little birdies on the old design.
I should have some trade packages and Ebay auction wins coming in over the next few days so I will have some good material to write about.  Plus, baseball spring training has started so that will probably inspire me to write a little bit more.  I don't try to post on a daily basis but hopefully from now on, I'll be able to get some decent content posted!  I promise, next time there will be pictures of cards!  So let me declare: 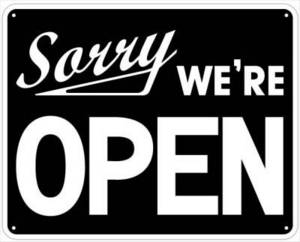 Ripped from the Headlines #2

I just saw this article on Yahoo! while I was at work:

I'm actually OK with this.  This has been rumored for years but now it seems like its actually going to happen.  Sure I won't get any mail delivered on Saturdays but if it means I can still be able to send and receive trade packages during the week, I'm all for it.

What do you think about the change?
Posted by Ryan H at 8:53 AM 8 comments:

Labels: Ripped from the Headlines

Ripped from the Headlines #1

I'm still having "technical difficulties" with my home computer but I was reading my daily Orioles links at work and I ran across this article about baseball cards on SB Nation:

Requiem for the 00's: The Decline of Topps Baseball Cards

I agree with some of the topics covered such as the Topps Monopoly, competition causes innovation, and kids are more attracted to video games than collecting cardboard.

The author does harp on the fact of the numbering of the flagship set a little bit.  It never really mattered to me if Cal Ripken or Ken Griffey Jr. or Frank Thomas had a nice "round" card number like 100 or 555.  I haven't grabbed many packs of 2013 yet but the numbering of the cards doesn't really mean a whole lot.  It's just how you put the cards in order, not some hierarchy of a player's worth.

The author does tend to appreciate tradition over present but makes it seem like a person interested in cards is only allowed to buy the latest and greatest.  For hardcore collectors (yes, if you are reading blogs and collecting, you are hardcore!) we know that you can still buy vintage cards online or at shows.  If you're only buying cards at Wal-Mart or Target, you're only going to be able to buy the latest and greatest!

Sure baseball cards aren't as popular as they used to be but Topps is still making money or they wouldn't be doing it anymore.  I don't really appreciate the article's author putting my hobby 6 feet under!  It's more of niche hobby now instead of mainstream and that's ok.  Roller skating was huge at one point in time and it surely declined but they are still around!  Not as many people snowboard as they used to.

Our hobby is not dead or dying.

Here's my only story from Orioles Fan Fest that I am going to share.  (I basically stood in the same lines and William from foul bunt and ended up with the same results, so check his blog for the blow by blow details).

I was standing in the kids only line with my friend Scott and his kid Austin.  Behind me were 4 boys that were probably from the ages of 8 thru 12 and they were rabid baseball fans.  I was talking to them and they were really knowledgeable about the game and the players.  I offered to send them a bunch of extra cards that I had (since I'm downsizing a bit) and they thanked me over and over.  I sent the cards last week and a few days later, the mother of 2 of the boys sent me an email thanking me for making the kid's days!  She said it was like Christmas at their house when the cards arrived.  It made me feel good to do something good for people I only met one time.  Maybe I sparked one (or maybe all 4) of the boy's interest in the hobby by giving away some cards.