Topps Just Announced This! MUST READ!

Topps just announced that anyone that has any of the SP Sparkle variation cards from 2014 Topps Series 1, should start ripping them open to find exclusive 1-of-1 parallels.  These are similar to the 1-of-1's that were included in the box tops of 2013 Topps Allen & Ginter!  These special 1-of-1's are actually smaller than the early 90's Topps micro cards. I think they are calling them Nano-fractors and they are actually colored shit brown.

I have also heard reports that you can find the SP sparkle variations by their smell.  It smells eerily similar to the Sparkles from 2011, which in turn actually smell like shitty baby diapers and Desitin.
Posted by Ryan H at 9:20 AM 3 comments:

Trade with Tom of Waiting 'til Next Year

As I'm slowly getting back into the swing of blogging, I'm remembering all of the good people/bloggers that I've met over the last couple of years.  Trading is something I miss the most about blogging as it's a great way to network with other collectors.

Tom from Waiting 'til Next Year is one of the aforementioned good people/bloggers that I've traded with a couple times over the last few years.  He sent out a cry for help to complete the 1987 Topps set over the blogosphere and I was happy to help out.  I was able to help him with a couple of his other set projects too.

He always seems to find some good cards for me.  He knocked off a few cards from my 2013 Topps set as well as a few Cubs extras that will fit nicely into my 1979 Topps set.  But that's not all he sent. For my One Card of Every Oriole binder he sent me this 1956 Chuck Diering.  If you aren't familiar with my OCoEO binder, I'm working on getting a card of every Oriole to ever play a game for the Orioles.  I'm probably about 75% (rough estimate) of the way there but I still need (mostly vintage) help! 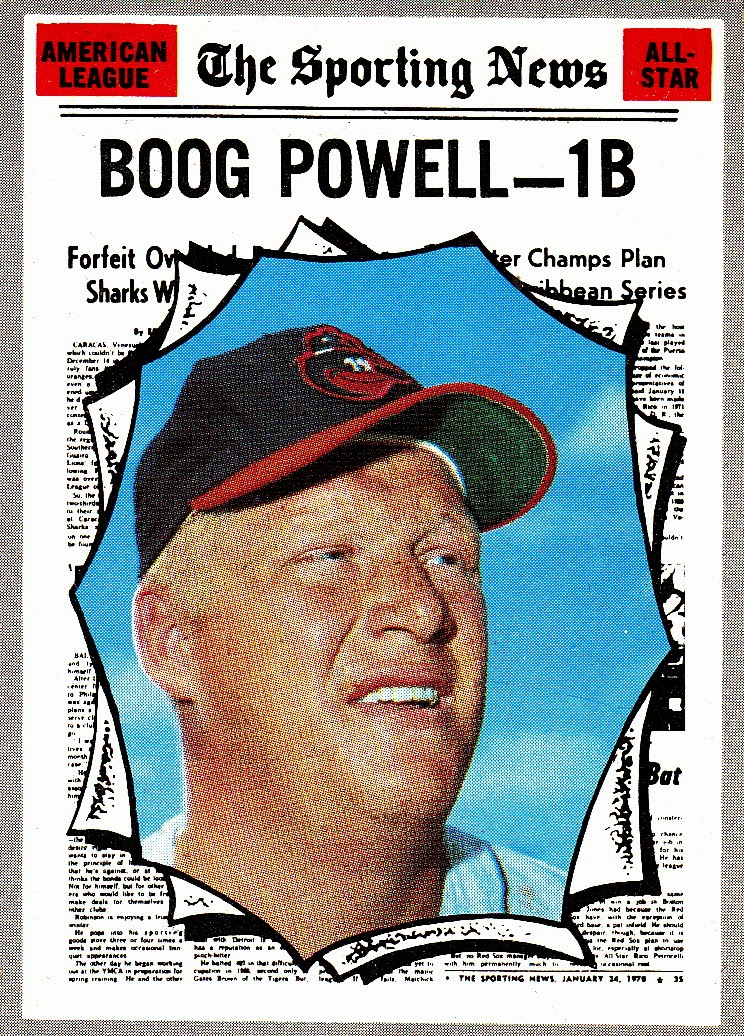 I do have a small Boog Powell PC.  This 1970 Topps All-star will fit nicely into that collection.  Boog doesn't get that many cards these days so most were from when he was an active player. 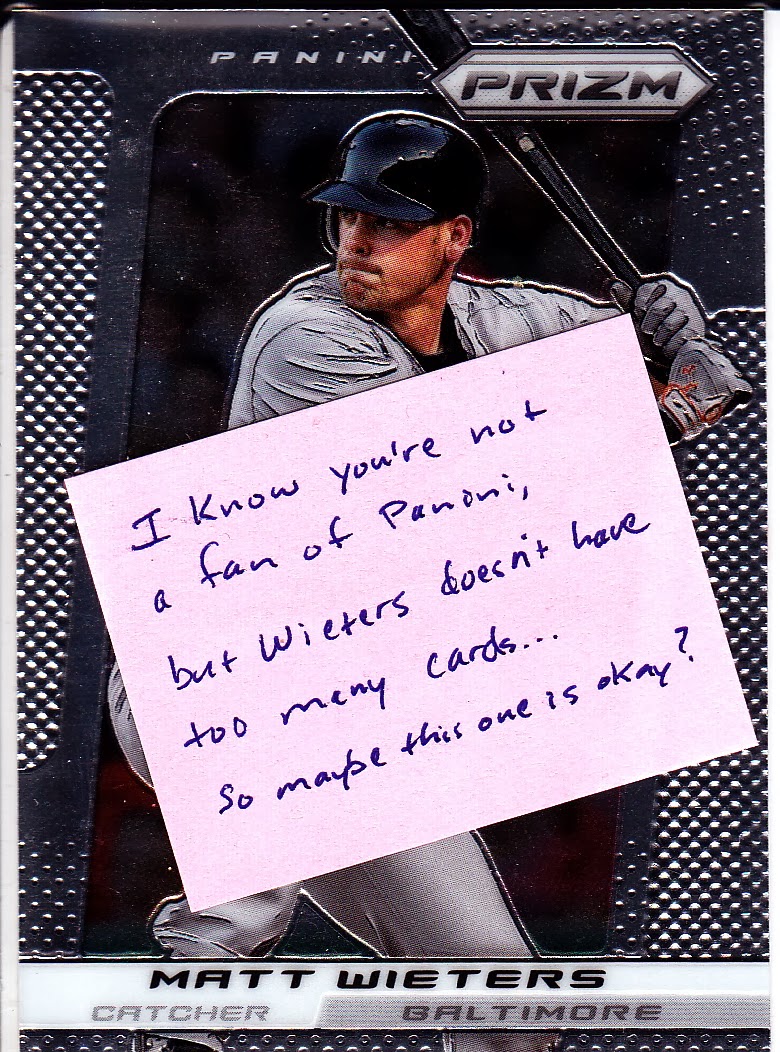 Finally, We have a Matt Wieters card from panini.  I'm going to let Tom off the hook here since he is correct that Matty Ice doesn't have a lot of cards.  Maybe panini will grow on me in time like the late 80's/early 90's oddball unlicensed food issues but I doubt it.  I just think overall panini is a waste of paper.  I was at Target the other day in the card aisle and there were several boxes of panini packs sitting there on the shelf.  Out of 5 boxes (Hometown Heroes, Pinnacle, USA Baseball Legends, Prism, and Cooperstown) not a single pack was missing.  I think that says something about how the general public feels about unlicensed product.

Trade with Judson of My Cardboard Habit

I've been away from regular blogging for nearly 6 months now and I can't say that I'm back to continue regular posting.  There's a variety of reasons that I haven't been more visible but you can read my previous post and pretty much figure it out.  Unless anybody begs me to elaborate on those reasons, I'm not really inclined to write about them.  But I am here right now while I have a few minutes to give thanks for a trade that I recently completed with Judson of My Cardboard Habit. 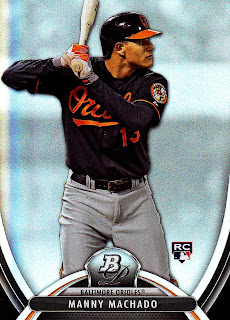 I will say that 2013 wasn't a banner year for my collection.  I didn't buy as much new product as I had over the past 3 years or so.  That's probably the reason I missed out on adding simple base cards of Orioles like the above Manny Machado card from Bowman Platinum. 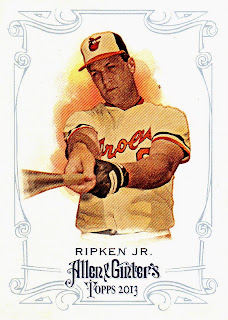 Can you believe I actually didn't have this card yet?  I only purchased a couple of packs of Ginter when it was released in August. 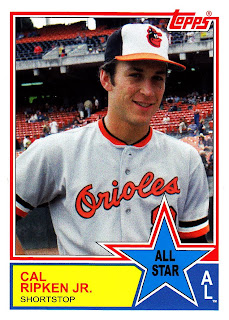 Topps Archives is a set that I've never bought a pack of so there's no way I could have obtained this card on my own.  Archives makes me sick to my stomach because it's a lazy product by Topps.  Just mailing it in and resting on their past laurels.  What's going to happen 5 20 years down the road when they need to reprint cards from 2013?  About half of the cards they produced are reprints and the other half only rich people saw (Five Star, Museum Collection, etc.)! 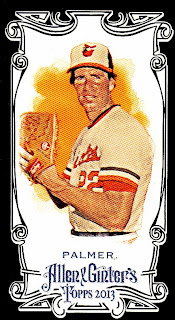 We can't really say that the modern iteration of Allen & Ginter is reprinted.  I guess it is just "reimagined" with all of the modern gimmicks innovations like rip cards and seeds embedded inside.

Judson also made a full frontal assault on my set wantlists.  He knocked quite a few cards off my 2013 Bowman, Topps, and Topps Update lists.  After I finish these 3 sets, I won't build any more modern sets from scratch.  From here on out (or until I change my mind), I'm just going to buy the sets from ebay.  It's cheaper that way anyways.  Busting hobby boxes to build sets is for suckers especially when you are guaranteed a jock strap "relic" card in each box.  No thanks.

I hate to sound like such a cynical asshole in this post (or maybe not).  I fully realize that I might lose readers by sounding like a Debbie Downer but the state of the hobby and baseball right now is just depressing to me.  If it weren't for blogging, I would have mothballed or even trashed my collection long ago!

So lost in all of my ranting was Judson who I apologize to for hijacking our trade post to spread libel about Topps.  I sincerely thank Judson for trading with me.
Posted by Ryan H at 2:57 PM 2 comments: