While scouring some of the tables I picked up a few "future" Oriole investment cards. While I'm not a full blown prospector, I do keep up with who's hot in the minors and try to keep their cards around. I mostly just stick to Orioles Prospects though.
My first card I picked up was this year's 6th round pick, Nick Delmonico. He has 2 brothers (one in the Dodgers system, and one at University of Georgia) and is committed to going to join his older brother as a Bulldog at UGA. He is going to be a tough sign probably commanding late first round - early second round money. He was considered by many GMs as unsignable because of his strong commitment to Georgia and was regarded in the top 40 prospects of this draft. I hope a deal can get done with Nick and he starts tearing up the Minors on his way to Camden Yards.
Nick had 2 cards released last year in his USA uniform... I'm hopeful I can find the one that was release in regular Bowman. 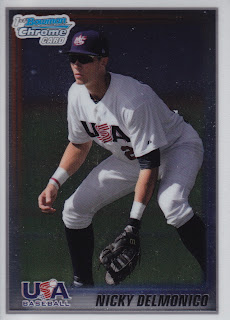 I picked this autograph of 2009's O's first rounder Matt Hobgood on the cheap. He has struggled so far in his minor league career. He just returned from a shoulder injury so I hope he can get going in the right direction now. 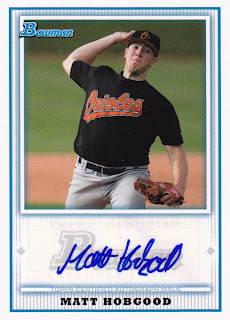 Speaking of tearing up the minor leagues, Jonathan Schoop (pronounced Scope), has been on a tear all season long. Starting at low-A Delmarva, he has been promoted to High-A Frederick. He has also been selected to play in the Futures game that takes place along with the All-Star Break Festivities. 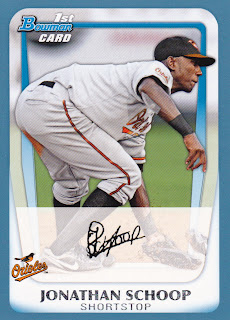