Trade with Brian of Play at the Plate

A while back, I claimed the Orioles portion of Brian's 2011 Bowman Blaster break. After some emails were exchanged, and vacations take by both parties, we both ended up with some really nice cards:

If Orioles fans took a look at this trio of cards back in 1999, you would think that we were set for the next 10 years with these players. Not so much. Ryan Minor became best known as the player that took over for Cal to end "The Streak". He now is the manager of the Orioles Single-A affiliate, the Delmarva Shorebirds. Calvin Pickering continued to "grow" but never was able to stick in the majors even though he had an overabundance of power. Jerry Hairston stuck with Baltimore until Brian Roberts supplanted him. Jerry has bounced around ever since but did manage to get a WS ring with the Yankees in 09. To me, I'm not sure that Minor and Pickering got a really good chance to establish themselves with the Orioles. We'll never know how they would have turned out.

Flash forward to Present day and the card that got this trade started in the first place: 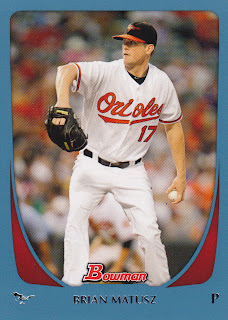 While Matusz was awesome to finish up the season last year, this year has been a trainwreck so far. Coming into spring training he was tabbed as our #2 starter. He got hurt and just returned a few weeks ago after rehabbing for 2 months. Apparently he isn't fully healed because his fastball is topping out in the 86 to 87 mph range. It's a far cry from the 92 to 94 he was throwing in college before he was drafted. 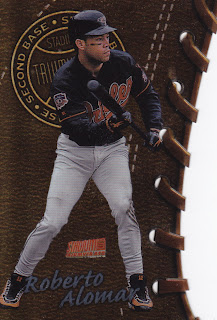 I bought a fair amount of Stadium Club in 1999 and 2000 but never finished the sets do to the shortprints. I did like the insert sets that the product always had but never could figure out what a Triumvirate Luminous was.... Regardless, this is a neat Die cut card of this years HOF inductee Roberto Alomar. 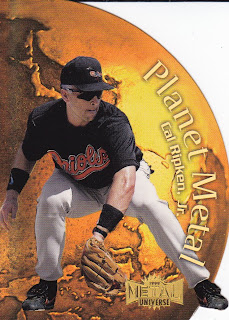 Sticking with the die-cuts, this Ripken insert from Metal Universe came paired with the Pinnacle Red Hot I featured early last week. Brian had pulled both of these from packs "back in the day" so I'm very grateful that he decided to trade them to me. Both of them are great new additions to my collection.

Thanks for the awesome trade Brian, and I'm sorry it took so long for me to post up the trade!
Posted by Ryan H at 5:59 PM