With the Minis Group Break in the rear view mirror (all the packages have been sent out), I can get back to thanking the great traders I've swapped cards with over the last few weeks. 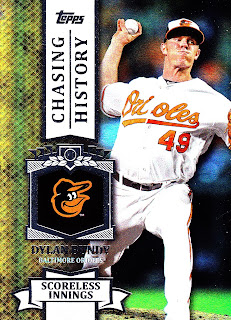 First up is this Dylan Bundy Chasing History card from Nate who runs the relatively new Big 44 Sports Cards blog.  He's a Pirates fan so go check him out!  It's amazing that the Orioles are even in contention for a wild card spot as crappy as the starting pitching has been this year (except for Chris Tillman, well mostly).  I can only imagine how much better the pitching staff would be if they hadn't rushed Bundy and caused him to blow out his elbow last September.  I'm wondering if they have ruined Bundy and Gausman by rushing them to the majors because of the crummy, faltering, starting rotation that has plagued them all year (or the last 15 or so years for that matter!).

Thanks Nate for the cards! 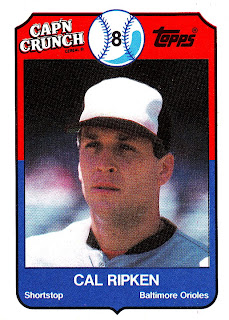 Onto a PWE that AJ from The Lost Collector sent me.  He included this Cap'n Crunch unlicensed card from 1989 of Cal Ripken.  Unlicensed cards from the 80's and 90's don't bother me but the Triple Play, Prism, and Cooperstown crap that Panini puts out these days is deplorable.  Buying Panini's "baseball cards" is like eating a veggie burger or drinking non-alcoholic beer.  You're missing the "meat" or the "alcohol" so what the hell is the point?  I don't watch baseball games on TV where the players have on street clothes or jerseys with blocked out logos so why would I want to buy cards that look just as drab?  Panini just makes me feel like something obviously missing that should be there. 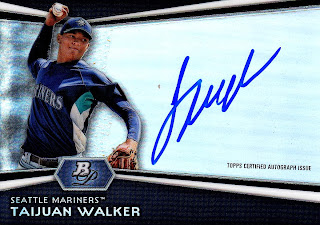 Lastly is this card from Sam our beloved Daily Dimwit. He saw the Andrew Aplin refractor autograph from my Bowman hobby box break and had to have it.  While he didn't have any Orioles cards I was interested in trading for, I opted to trade for the Taijuan Walker autograph card from last year's Bowman Platinum to use as trade bait.  Walker is a pretty highly regarded prospect in the Mariner's farm system and I believe he is being recalled for a cup of coffee in September.

Thanks guys for the trades!
Posted by Ryan H at 7:08 PM