Since I'm a pretty big Bowman fan, I somewhat look forward to new releases of the Bowman name.  This year's Bowman Platinum is no exception!  The cards are shiny as each card in the set looks like a refractor.  I'm attracted to shiny like a mosquito to a bug buster.

I made a dumb mistake at Target when I bought these.  I bought 4 of the value packs because the rack thingy it was hanging on said "Excell MLB Baseball 4.99".  Everyone knows that Excell stocks the cards in the section so I did a little math in my head and figured that either Topps was selling these rather cheaply or Excell made a mistake.  Plus with the cards literally being on the shelf for a day or 2 I wouldn't think they would have gotten stocked in the wrong spot.  WRONG.  I got to the register and they rung up at 9.49 a piece.  I should have put 2 back but I'm glad I didn't (I think). 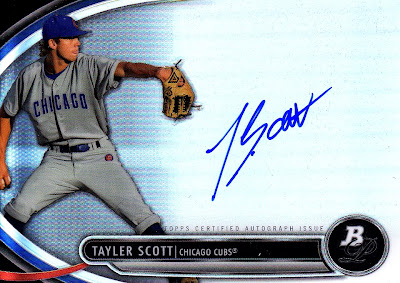 I'll start off with my mojo autograph hit of Tayler Scott of the Cubs.  I seem to pull Blue Jays, Astros, Yankees, and Cubs hits out of everything I buy at retail.  WTF.  The autographs aren't too terribly hard to pull out of retail at 1 every 31 packs. 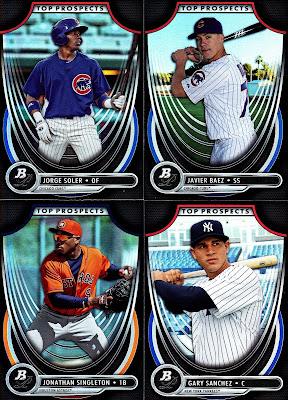 Here's a gaggle of top prospects.  Notice the Cubs, Yankees and Astros are prevalent here! 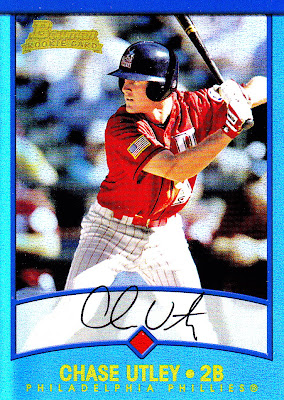 Here's another one of the blue sapphire rookie reprints.  Not my cup of tea but I think somebody in the blogosphere is collecting these but I can't remember who.  Anybody know? 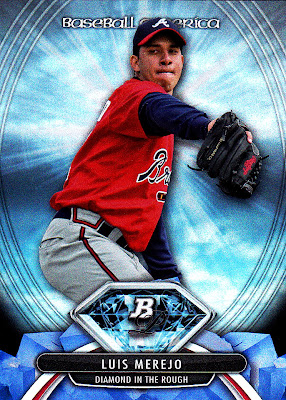 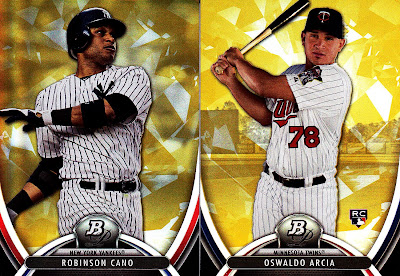 I guess these are called the gold diamond/ice paralells.  I also got a Braun but nobody wants to see his lying picture on my blog.  I should tape some of his cards to a bottle rocket and do a video feature here on the blog.  Any interest in seeing that? 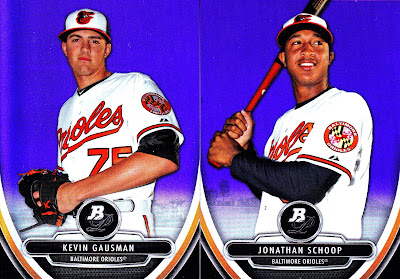 I got a good pile of Purple refractors (12 to be exact) since they came 3 per value pack.  I'm really lucky and happy to get 2 of the Orioles brightest young farmhands.  I imagine if I would have put 2 of the value packs back on the shelf that knowing my luck it would have been the 2 that contained these cards!  I've had total crap luck this year when it comes to pulling O's cards from packs.  I didn't get any of the base cards from Bowman Platinum of the Orioles (there's only 3: Jones, Bundy, Machado).  Every card you see on this page is for trade except for the Gausman and Schoop.

Here's a visual list for all of the cards I have for trade from the product: