I had the pleasure of completing another trade with Michael of Nomo's Sushi Platter the other day.  I might have said this before but Mike and I have hooked up on multiple trades over the last few years and each and every one seems to be awesome! 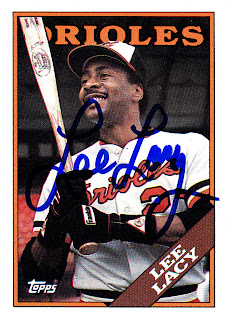 I think this autographed 1988 Topps card of Lee Lacy is from one of the Dodgers' alumni autograph signings that they do at the park on select game days.  The Orioles have a similar ongoing promotion but they usually only do that on Mondays and Thursdays which means I can never get to the park to get some free autos.  I live 3 hours and some change away from Baltimore! 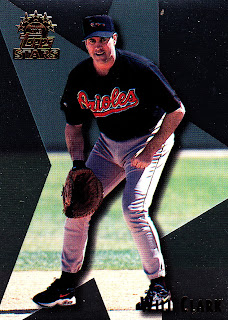 I never tire of getting cards of Will Clark in an O's uniform.  I don't remember that much of his tenure in Baltimore since it came around the turn of the millenium.  This card is an ebay 1/1 (which I've been on a streak of getting lately) since it is numbered 221/250.  2 is the numbered position of the catcher which Will never played on a major league game, 21 is Nick Markakis' jersey number and 250 is one less than 251.  A true gem! 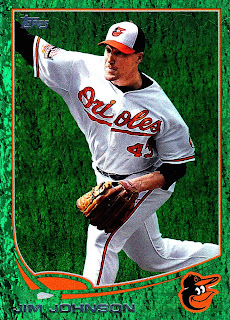 I think this is a time appropriate card.  This card was actually the base version before I threw up Listerine all over it.  Many O's fans are get green in the face when they see Johnson trotting out of the bullpen with a one run lead.  He's blown 10 saves this year.  10!  Where would the O's be if they had won 10 more games.  First Place!  Where would they be if they had won even 5 of those?  The first Wild Card slot!  Even Brandon League only has 4 blown saves on the year and he sucks!  I'm not a Dodgers fan and even I know that!

Thanks Michael for the nice stack of cards and the conversation pieces!
Posted by Ryan H at 2:48 PM