I've received quite a few smaller trade packages in the mail lately.  While the volume of cards received might have been small, each and everyone of them filled a hole in my collection. 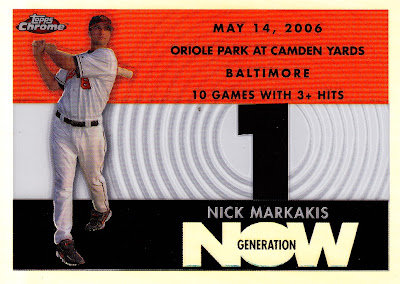 This one came from Dennis of Too Many Verlanders.  This package showed up in my mailbox as an unannounced surprise.  He was digging through some boxes at a card show an though I would like the card!  Boy, was he right!  When I'm dime box digging, I always try to think of my fellow collectors too.  Nothing beats trade bait on the cheap! BTW, this is the refractor version of the insert set and it's numbered 434/500.  It's tough to see the refractory finish in the scan. 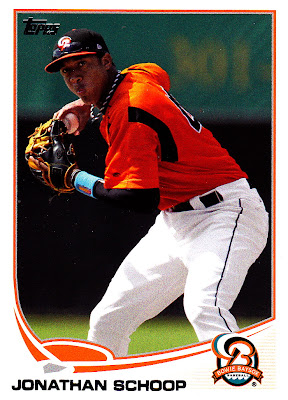 Tom from the nice blog Waiting 'til Next Year sent me this Pro Debut from this years set along with a nice stack of 2013 Bowman to help with my set.  Schoop is probably the most advanced offensive prospect the Orioles have now that LJ Hoes is now an Astro. 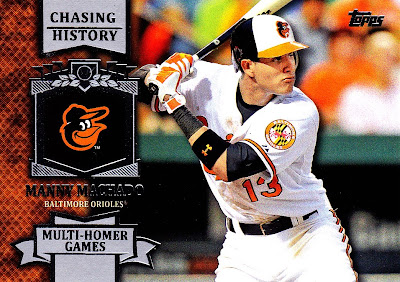 Next, is a spanking-new Manny Machado Insert from 2013 Topps Series 2.  I think the Chasing History set is pretty well designed, but I think the "records" that are being chased are some what coincidental.  Manny never had a multi-HR game in the minors and on his second day after getting The Call, he smacked 2 dingers in a game.  So I guess that means he'll be chasing that record now....  I dunno, just seems like they had to get the best players in an insert set so they had to think up some off-the-wall records for them to "chase". 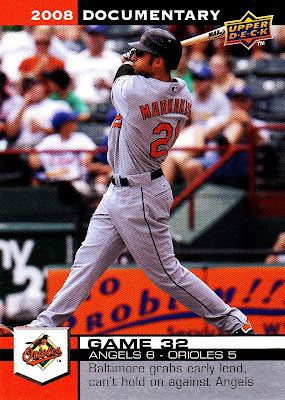 I think I will be forever chasing the UD Documentary set from 2008.  162 cards for the team set will keep me busy for quite some time.  BTW, the Machado above and the Markakis are from a reader of the blog named Kyle. 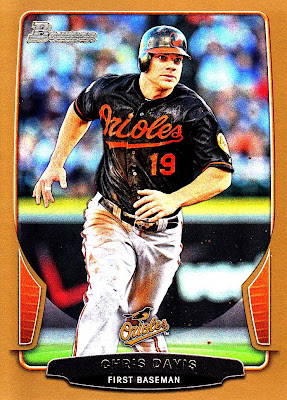 Next is a Gold parallel from this years Bowman that was delivered from Brian of Play at the Plate.  I still don't have the base version of this card though.  I'm sure with "Crush" hitting so many dingers this year, we'll be seeing more and more of his cards in products. 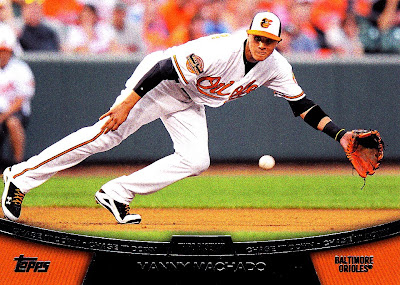 This Machado comes to me from Bryan of Golden Rainbow cards.  I've seen several cards that are in this insert set and I like them a lot.  I love action shots on baseball cards more than posed shots so the Chase it Down insert set is right up my alley.  I won't be collecting the set, just picking up the Adam Jones and calling it complete. 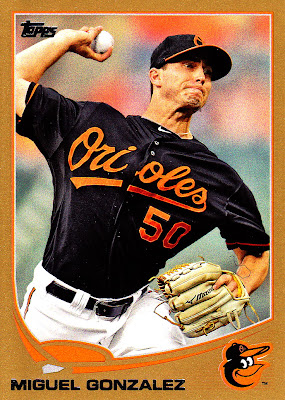 Bryan also included this sweet Miguel Gonzalez gold parallel in a later PWE in the trade.  I'm not quite sure why Topps didn't put the rookie card logo on any of Miguel's cards this year.  As far as I can tell, he hadn't had any cards issued before this year.  If Topps isn't going to put the designation on all of the cards, then don't do it at all!

Thanks to all the great traders that sent these awesome cards!
Posted by Ryan H at 7:17 PM